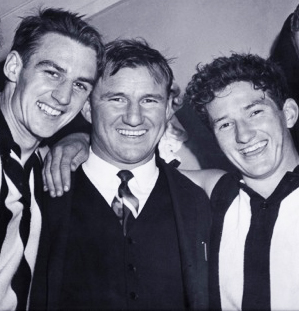 Bob Rose was a great player, arguably the greatest this club has ever produced. He was also a great coach. But he was also one of the unluckiest coaches ever to have picked up a clipboard.

There were the three famous grand final losses, of course: by four-points in his very first season, by a solitary point in his third and by 10 points in the most famous grand final of all, after the team blew a seemingly unassailable half-time lead.

But there were other, less well-remembered heartbreaks as well. In 1965 a preliminary final appearance was derailed by the flattening of Essendon’s John Somerville. In 1969 the team finished on top of the ladder but lost both its finals matches. In 1971, the team imploded late in the season after being flag favourites after 17 rounds. Nothing seemed to go right for Bobby Rose and his boys. The team, it was often said in later years, seemed to be cursed.

It had all been so different when the prodigal son returned to Victoria Park at the end of the 1963 season. Rose had retired from the VFL in 1955 and moved to Wangaratta Rovers as playing coach on big money. He guided them to two flags in seven seasons there, and it became widely known he was keen to return to Melbourne and coach in the VFL.

Amidst reported interest from Richmond, the Pies moved swiftly late in 1963 to secure Rose’s signature after Phonse Kyne was encouraged to move aside. But in doing so he had to defeat former teammate and loyal reserves coach Neil Mann for the position, and in the aftermath of the result he displayed the humility and grace that would characterise much of his reign.

“I am very pleased to get such an honoured position in the Collingwood Football Club, but I feel sorry that Neil Mann had to be the loser,” he told the press. “I understand how disappointed he must be.”

The Pies were not in good shape when Rose took over. They’d missed the finals for three successive years, and the last had been dominated by unrest and infighting. Still, Rose felt there was potential there and that a significant improvement was possible.

But even he must have been surprised at just how far, and how quickly, the players improved. He set them a punishing pre-season fitness schedule, even having a 100-yard sprint track marked out on the ground to improve performances in the sprints that now became a staple of summer sessions, alongside plenty of gut-busting long runs. His new broom even extended to the clubrooms, which were given their biggest facelift since the 1930s.

Rose’s coaching philosophy became evident soon after the season began. While he was a traditionalist who came from the McHale-Kyne school of love the club and bleed for the guernsey, he was also a forward thinker who introduced greater attacking flair to the Collingwood game. He believed greater emphasis had to be placed on fast, play-on football. He reintroduced Tuesday night match practice, and the rule within those games was to play on at all costs. He also believed in greater use of handball, seeing it as an effective attacking weapon rather than just a last resort to get out of trouble.

As the 1960s rolled on, sublimely skilled players such as Wayne and Max Richardson, Barry Price, John Greening, Len Thompson and Peter McKenna all joined the club and became perfect exponents of the Rose style of play. Under Rose they played fast, attacking football, with lots of run, plenty of handball and potent scoring power. They were thrilling to watch. Indeed, Bobby Rose’s boys played some of the best, most exciting football ever produced by any Collingwood outfit down the years.

But it was never quite enough to secure the ultimate prize. He went agonisingly close in his very first season, taking a team that had finished eighth in 1963 to second on the ladder and a place in the grand final. The players looked like an entirely different outfit, reinvigorated, fitter and more enthusiastic, and for a few brief moments late on grand final day looked like emerging as surprise premiers. Ray Gabelich kicked one of the most famous grand final goals late in the game, but a freak goal to Melbourne back pocket player Neil Crompton with less than a minute left broke Magpie hearts. It was to be the start of a trend.

The near-miss of ’64 was followed two years later by Barry Breen’s wobbly point that gave St Kilda their first flag. Four years after that it was Teddy Hopkins coming off the bench as Carlton overcame a 44-point half-time deficit to demoralise players, coaches and fans alike.

Through it all, Bob Rose emerged with great credit. He carried himself wonderfully well in the face of continued sporting heartbreak, his dignified response to increasingly crushing defeats a lesson to all on the meaning of sportsmanship. The sight of him making his way through a crowd of excited St Kilda officials to shake hands with Allan Jeans after the siren in 1966 spoke volumes.

A former opponent, Brian Dixon, once wrote that the secret of Rose’s success lay in “his love of Collingwood and football, his preparedness to learn and give deep thought to the game…and his capacity for self-analysis and consequent effective direction to others.”

But his greatest strength was, perhaps, his relationship with the players who played under him. Almost to a man, they loved him. Many remain heartbroken to this day that they could not win a flag, not just for themselves but also for Bobby. They felt they had let him down. Certainly, they gave everything they could to Bob and the Collingwood cause.

But the footy gods decided that would not be enough. And the late-season implosion in 1971 that saw the team suddenly go into freefall and captain Terry Waters resign, was one blow too many for Rose. He retired at the end of that year, though he returned to the VFL in 1972 to coach Footscray for several seasons.

Remarkably, Bobby Rose’s coaching story didn’t end when he finished up at the Western Oval. In 1985 he returned to Victoria Park for a second stint as coach. By this stage his standing both inside and outside Collingwood had grown even larger, if that was possible, by virtue of his handling of the tragedy that had befallen his family when son Robert, a promising footballer with Collingwood and Footscray and an even better cricketer, became a quadriplegic after a car accident in 1974.

But his second stint as Collingwood coach was brief. The Pies missed the finals in 1985, and Rose retired again – this time for good – after just three rounds of 1986, handing over the reins to a newly-hired assistant coach called Leigh Matthews. Four years later, the drought-breaking flag that Bobby Rose so desperately craved flew again from the stands at Victoria Park.

Even now, the hand that fate delivered to Bob Rose’s coaching career seems to have been a particularly cruel one. If anyone deserved to coach his team to a premiership, it was Rose. His teams played brilliant, thrilling football, and only a few pieces of misfortune deprived him of a place among the pantheon of coaching greats. He could easily have had two or three flags to his name. Still, as one of the greatest players to have played for the club, and one of the finest men ever to have represented it, his place in Collingwood’s history is secure.