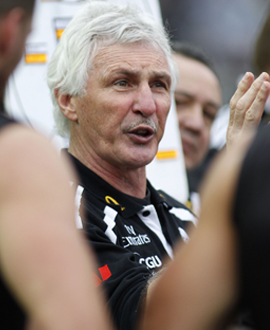 It started in the front seat of a Lexus in late 1999, Collingwood’s coach for the new millennium revealed in a puff of smoke and flashing lights; and it ended on football’s biggest stage, the 2011 Grand Final.

Mick Malthouse’s 12 seasons as Magpies coach were anything but conventional.

But the Malthouse years helped to drag an ailing Collingwood out of its late 1990s malaise and back to being a football power – doing on the field what president Eddie McGuire did off the field.

That restoration of pride and performance helped to provide the platform for the club’s 15th premiership; a dramatic drawn Grand Final; three other Grand Final appearances; and a team that was for a time the envy of every other football side.

McGuire saw Malthouse as the man capable of building a competitive force out of a team that was on the bottom of the AFL heap. Having coached West Coast to two flags, and after a decade of finals appearances, he looked to the perfect candidate.

And, as luck would have it, this one-time childhood Collingwood supporter was keen to return home to Victoria.

Malthouse was realistic about the task he had set himself. In a column he wrote on the day of his appointment in the Australian, he wrote: “Expect no miracles or quick fixes. But the odd success is not enough; everyone at Collingwood will be aiming for long-term excellence into the 21st century.”

There would be no miracles in his first season – 2000 – with only seven wins. But the coach was working his way through the playing list, crafting and constructing a side that would become competitive sooner rather than later.

In that second season, there would be more improvement, winning 11 games and missing out on the finals by only a game.

Incredibly, in Malthouse’s third season at Collingwood, he took a rebadged side to a Grand Final. For a time, it looked as though this hard-working, blue-collar, team-first Magpies outfit would almost bring about one of the great Grand Final upsets.

But the Brisbane Lions held on to win the 2002 Grand Final by nine points, and then crushed Malthouse’s Magpies a year later in the corresponding game, even though Collingwood had beaten them in a qualifying final.

There were some tough years in the mix, as Collingwood fell to 13th and 15th in 2004 and 2005, but all through those years, the coach was looking for the right mix of players who could once more compete for the ultimate success.

In 2007 the Magpies were exceptionally stiff. They almost beat the all-powerful Geelong in an epic preliminary final, agonisingly losing by five points when the ball was in attack, with the Cats smashing Port Adelaide a week later.

That was Nathan Buckley’s last game as a player, and more finals beckoned in 2008 and 2009, although each time it found teams better than it.

All the pieces of the Malthouse jigsaw puzzle finally came together in 2010, with Darren Jolly (Sydney) and Luke Ball (St Kilda) acquired to fix deficiencies.
Collingwood won 17 of its 22 home-and-away season, stamping itself as clearly the best team of the season.

And the Magpies, with a team full of talent and youth, proved dominant early in the finals series before one of the most tight, tense Grand Finals in history. St Kilda and Collingwood fought out a dramatic draw in the Grand Final before Malthouse’s team prevailed in the decider by the greatest winning margin by a Magpies side in a Grand Final.

Malthouse had fine-tuned aspects of his preferred game model, basing much of the club’s frenetic pressure on – of all things – the Roman army formation and German World War II strategist Field Marshall Erwin Rommel.

He said after Collingwood had won the 2010 flag by 56 points: “I looked at the Roman legion, which is in a box formation and very hard to penetrate. The box can get smaller and smaller, but you’ve always got fighting capabilities all the way through, which we’ve pushed in front of our opponents for the last two years.
“The second one was a bloke who I read a lot about because of his daring. Rommel’s front-on assault was a methodology without superior numbers that hit an opponent, the enemy if you like, front on. And I’m at pains to say that neither succeeded in any lengthy history. So this game plan will succumb at some stage.”

Malthouse knew 2011 would be his last season as Pies senior coach, with Collingwood securing a handover transition in 2009 that was meant to ensure Buckley would be the senior coach and Malthouse the director of coaching from 2012.

But after Collingwood lost to Geelong in the 2011 Grand Final in a season derailed a little by injury late in the year, Malthouse opted to leave the club.
When he told the football world he was leaving, he said: “This football club 12 years ago was the worst football club in the competition. There were sniggers and sneers and little chuckles when I said my goal, whether we achieved it or not, was to make Collingwood Football Club the Manchester United of the AFL.

“I feel very confident in saying I think the membership base, the sponsorship, relocation and the win-loss ratio has at least moved this club in the right direction.”

And, importantly, there was also another premiership cup in the trophy cabinet.