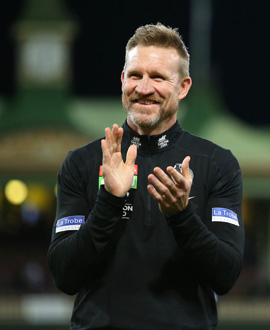 Nathan Buckley thanks fans after victory over Melbourne in Round 13, his last game as Collingwood coach.(Photo by Jason McCawley/AFL Photos)

Few Collingwood coaches have had as dramatic a tenure as Nathan Buckley endured – and sometimes enjoyed – over his nearly 10 seasons in the top job. Partly that was because of his pre-coaching status as one of the game’s greatest ever players, but mostly it was because of the way in which he came to the position.

Bucks started as coach in 2012, having reached that point via the now notorious coaching succession plan hatched in 2009. Less than two years after he’d retired as a player, and with other clubs sniffing around, the club anointed Buckley as the man to replace Mick Malthouse, who by then was into the 10thyear of his own coaching stint. Under the plan, Malthouse would continue to coach until the end of 2011, after which he would be replaced by Buckley and continue on at the club as ‘director of coaching’. It seemed like a ‘best of both worlds’ scenario for Collingwood – at least initially.

The trouble was (and it was a nice ‘trouble’ to have) that we won a flag in 2010, and went to a Grand Final the next year. Then Malthouse, who had spent much of 2011 making it clear he wasn’t really that keen on going after all, reneged on his part of the deal and decided to quit entirely.

All that meant that when Nathan Buckley finally took over as Collingwood coach at the end of 2011, he was in an unusually invidious position. Firstly, he was taking over a team at the top – so he was afforded none of the usual settling-in period that most new coaches get. Most coaches take over when their team is down the bottom or struggling and even small improvements are welcomed, but Bucks had the reverse problem: the only way, really, was down. Secondly, he had a predecessor who made his unhappiness clear, publicly and frequently. And thirdly, he inherited what quickly became a divided fan base – those who believed in Bucks, and those who felt Mick should have been retained. The end result was a uniquely pressured situation.

That situation was made worse in the first few months of Buckley’s coaching tenure when a bunch of senior players went down with season-ending injuries. It was to be a recurring theme of Buckley’s time: the club rarely had a decent run with injuries, especially in his first six years.

Despite the injuries, Bucks’ Brigade started well, making it to a preliminary final in his first year, followed by a disappointing first-week finals exit in his second. The club then set itself for a rebuild, trading out favourites such as Heath Shaw and overseeing the retirements of Luke Ball, Darren Jolly, Ben Johnson, Alan Didak and others.

The next few years were bleak, with the team missing the finals from 2014-17 and frequently being criticized for uncertain attacking moves and an at-times porous defensive structure. Bucks, who had been intensely driven as a player, initially brought the same level of intensity to his coaching and was a frequent advocate of the need to work harder and longer in order to get better.

But by 2017 it was clear that approach wasn’t working. Most observers felt Buckley would be sacked. Instead, as part of a club-wide review carried out by later Board member Peter Murphy, he was given a two-year extension – and a raft of new assistants. But the biggest change came from Buckley himself. He became more relaxed, delegated more often, and let go of some of the micro-managing aspects of his behavior that had apparently caused some internal stress. He brought eastern philosophies into his messaging and seemed to adopt a much wider world view.

The changed approach worked better than anyone could have imagined. With Justin Longmuir overhauling the defence and an unpredictable forward set-up showcasing the ‘swoop squad’ of Jordan De Goey, rookie Jaidyn Stephenson, Josh Thomas and Will Hoskin-Elliott alongside Brody Mihocek and Mason Cox, the Magpies came from nowhere to being just two minutes and one freakish chain of West Coast possessions from the most unlikely of Premiership wins.

Nathan Buckley the coach had been reborn, and rebranded. He was now regarded not just as a masterly media performer (he’d always been outstanding with the media, and was widely admired throughout the football world for the dignified way he had held his tongue despite the occasional potshots from his predecessor) but a genuinely wise and caring man who loved his players and wasn’t afraid to show his vulnerabilities. He also looked to change the club’s culture – less self-aggrandising and lauding ourselves as the biggest and the best, with more emphasis on letting actions do the talking. The players loved the new approach, and him, and responded accordingly.

A successful 2019 season showed that 2018 had been no fluke, although a preliminary final loss to the Giants was a deeply disappointing way to end it. But the COVID-hit 2020 was arguably the most challenging season ever faced by coaches and players, and the team just snuck into eighth spot before turning in one of the greatest finals wins in its history, beating the Eagles on their home deck by a point. A thrashing at the hands of Geelong the next week was a sour end.

But that was nothing compared to the off-season that followed. A salary cap-inspired firesale saw three top players unloaded for little return, and Buckley himself was caught up in the mixed messaging that followed. A string of other off-field issues culminated in Eddie McGuire resigning, and when 2021 turned out to be a horror story on-field as well, petitions began circulating for a Board challenge and Extraordinary General Meeting. It was, to put it mildly, a chaotic atmosphere.

Through it all, Buckley continued to present as the public face of the club and carry himself with dignity and measured composure. But the on-field results were not good, and there was widespread criticism of the team’s slow and at times turgid ball movement. Talk inevitably returned to his future. By mid-season, with finals out of the question and the club officially in rebuild mode, Bucks was told his contract would not be renewed for 2022. He decided to leave the post mid-season, and the players showed how much they still loved him with a stirring win over eventual minor Premiers Melbourne in his farewell match.

The outpouring of emotion after Bucks’ farewell said much about the esteem in which he was held not just at Collingwood but also within the wider football world. The footy gods were not kind to him in his coaching years, but he still went within a whisker of a Premiership. It seems almost inevitable that he will get another chance to coach, somewhere else, a little further down the line.