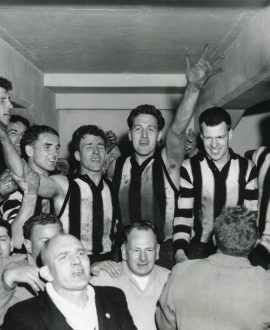 Collingwood’s 1958 premiership is arguably the greatest in the club’s history.

For a magical, against-the-odds, fairytale triumph, nothing compares with it. The Magpies of ’58 were not the best side in the competition that year. They lost more matches than any other Collingwood premiership team, and struggled with a late-season form slump that saw them lose four games out of six. Plus they were opposed to one of the all-time great VFL/AFL teams.

So the win was highly improbable. But what makes 1958 reallyspecial, however, is not just that the team somehow found a way to win in all those circumstances; it’s that, by doing so, they allowed the club to hold on to one of its most cherished records, the four-in-a-row of The Machine.

That’s what gives the 1958 flag its added romance, its sense of destiny, and elevates it above so many others. Even beyond Collingwood, this is one of the most famous, and fabled, premierships in VFL/AFL history.

To understand the significance of what the Collingwood players achieved that year, you first have to understand the force they confronted. The Melbourne teams of the mid-to-late 1950s were some of the most formidable football has ever known. The Demons played in seven successive grand finals, winning five, and finished on top in six of those seasons. They were led by one of the game’s greatest coaches, Norm Smith, and included one of the game’s greatest players, Ron Barassi, in his prime.

The Magpies seemed to have no answers to them: by the time of the ’58 grand final they hadn’t won in their previous 10 encounters, including the 1955 and 1956 grand finals, and had not beaten Melbourne in a final for 20 years. In the second semi-final we had been smashed by 45 points, and even that margin flattered us.

The Pies made all sorts of changes to their team after the semi-final – the line-up included five teenagers and two others with barely a handful of games – and looked a vastly improved outfit in getting over North in the preliminary final. But when it came to the grand final, the Demons were unbackable favourites.

The Agedescribed the Magpies as ‘the greatest outsiders in a finals game for many years’. Barrie Bretland, in The Sun, said Collingwood simply didn’t have the class to beat Melbourne and it would take a miracle to even get close. Even Lou Richards described Melbourne as the ‘hottest favourites since Phar Lap’ and admitted they looked ‘certainties’ to win the flag.

The only things Collingwood had in its favour were the glorious uncertainty of football, and the emotional pull of protecting the club’s four-in-a-row premiership record.

The day didn’t get off to the most promising start when the club’s reserves side went down in its grand final by four points. But there was better news on the weather front, with the cold, wet conditions expected to favour the Pies.

Despite an emotionally-charged pre-match address from coach Phonse Kyne that had all the Magpie players fired-up, Melbourne produced a five-goal first quarter and charged out to a 17-point lead at quarter-time. It looked like the game was going to expectations.

As the players returned to their positions after the break, acting captain Murray Weideman and Barry ‘Hooker’ Harrison decided to ramp things up a notch. Upon the restart, Weed almost immediately crashed into several Demons, and Harrison flattened Melbourne’s most important player, Ron Barassi. Bill Serong decked Ian Ridley. There were spot fires everywhere.

And this is where the game turned. The Demons began hunting for retribution, while the Magpies quickly returned their attention to the ball. Having sucked Melbourne in, they focused more on the footy while their Demon opponents ran around trying to belt Magpie players left, right and centre. Dick Fenton-Smith gave away a free to Thorold Merrett and crashed the ball onto his head in disgust. Laurie Mithen ran 20 yards to flatten John Henderson after he’d marked, then a few minutes later swung a wild left hook at another Magpie, sparking a melee that involved trainers as well as players.

There were skirmishes everywhere, but in the midst of it all, Kenny Bennett, the youngest and smallest player on the field, twice tore through packs for two goals. Then Mick Twomey goaled with a long bomb from a free kick. By half-time the Magpies were – remarkably – two points to the good.

The Collingwood players weren’t used to being in front of Melbourne at half-time of any game, let alone a grand final. And they drew great confidence from what had happened in the second quarter. In the Melbourne rooms, Norm Smith was imploring his own players to stay away from the fights and return their attention to the ball.

Any resolve Smith had instilled in his players quickly evaporated, and the argy-bargy began again within minutes of the restart. Much of the rough stuff was coming from Melbourne players, clearly unhappy and frustrated at being behind. ‘It was a pity to see the Demons’ attitude to the game,’ wrote The Sporting Globe.

The play was fierce, and some Melbourne players seemed to become hesitant about putting their head over the ball in the packs. Collingwood players, on the other hand, were more than willing to take part in the physical exchanges, but also seemed more capable of playing footy in between the fights. And in the third quarter they played some great footy, their magnificent defence keeping Melbourne goalless for the term while the forwards piled on five goals.

Collingwood went into the last huddle for the year with a stunning 33-point lead.

The team spent the last quarter focused almost entirely on defence, forcing ball-ups, kicking to the boundary at every opportunity, wasting time wherever they could. Reeves, Sullivan and Gabelich fought superbly in defence and closed down every Demon surge. Melbourne grabbed a couple of goals, while Collingwood could manage only a single behind, but it didn’t matter. The siren sounded with those mighty, magnificent Magpies 18 points in front – and the four-in-a-row record safe, hopefully forever.

Phonse Kyne and the rest of the officials on the bench leapt high into the air in jubilation. Players were carried from the field on the shoulders of teammates and support staff, and there was complete chaos in and around the rooms, as thousands of fans crammed the walkways underneath the MCG.

About 1000 attended the celebration dinner that night, where Kyne and his wife led the dancing with a fox trot to ‘Alexander’s Rag Time Band’. ‘I still can’t realise we’ve won it,” he told the happy crowd. Another 750 crammed into the clubrooms on Sunday morning and there was a further dinner on Monday night. On Tuesday, players and officials left by train for a two-week holiday in West Australia, and the celebrations resumed almost as soon as they returned, with half a dozen more functions, including a massive dinner at the Collingwood Town Hall.

Those celebrations honoured an extraordinary team performance. While Weideman and Harrison played their ‘tough guy’ roles superbly, it’s often forgotten that we played by far the better footballthat day.

Ken Turner and Thorold Merrett were magnificent in the wet, as was the diminutive Kenny Bennett. Graeme Fellowes and Ray Gabelich were outstanding in the ruck, and Gabbo, Harry Sullivan, Mike Delanty and Ron Reeves impassable in defence. Bill Serong added muscle to speed. Young players like Beers, Henderson and Rose, as well as Reeves and Bennett, all stood up when needed. Every single player did his bit to ensure that Collingwood held onto its most cherished record.

It was a staggering result, and still remains the greatest grand final upset in VFL/AFL history. Critics were unstinting in their praise. Alf Brown in The Heralddescribed Collingwood’s performance as ‘courageous and amazing’. St Kilda coach Alan Killigrew said the premiership was ‘a triumph of courage and spirit – the will to win’.

Percy Beames in The Agewrote:
“The deciding weapon in [Collingwood’s] win was something Melbourne simply could not match on the day – the fierce desire of Collingwood’s players to win Saturday’s honour for their club. Those Collingwood players had something more than courage and determination behind them. They were defending the League record of four successive premierships … and they played throughout the grand final as though their very lives depended on keeping that record.”

But perhaps the final word should be left to the great Syd Coventry, the man who piloted the team to those four successive flags, and who was president of the club in 1958. ‘This was the greatest performance in the history of the Collingwood Football Club,’ he said. 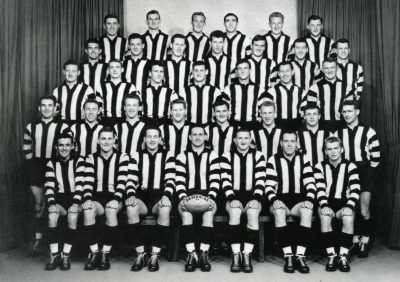