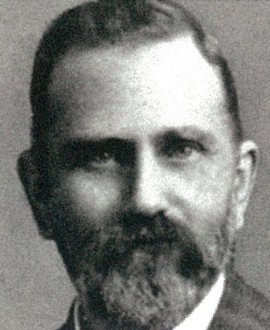 It might seem an odd thing to say, but Collingwood’s shortest-serving President had a truly profound impact on the club.

His name was Alfred Cross, and he served only one year as President. But his service both before and after his short stint at the helm marked him as one of our greatest officials, for he played a pivotal role in the club’s formation and its earliest days.

Alfred Cross was born in Daylesford in 1856. At 24 he married a woman named Hannah Verey, and their surnames would become famous around Collingwood for the tailoring business Verey & Cross that Alfred and his brother Joe established in Smith Street in the early 1880s.

That business soon spread to other locations, including Williamstown, North Melbourne and Bourke Street in the city, turning Alfred into a prominent and powerful businessman. He had a strong connection with the suburb of Collingwood and regularly provided trophies and awards to local sporting teams and competitions, especially football and cricket. He was a strong supporter of the Capulet Cricket Club, which played at Victoria Park, and the Collingwood Imperials footballers. But he also supported art shows, local community fairs, horticultural displays and the like.

He was also, importantly, one of the officials of the Britannia Football Club. But he, like a number of other prominent local businessmen, believed Collingwood needed a team of its own, one that bore the name of the suburb. So he became a key player behind the push to form the Collingwood Football Club, and it was no surprise when he was named one of the Magpies’ four vice-presidents in their inaugural season.

Cross was revered as one of the club’s founding fathers, and he played an important role on the committee, presiding over most meetings. He was also the Chairman of Committees for many years, where, according to the club, “his mature judgement, diplomacy and strict impartiality have, as occasions arose, been exercised with the very best results.”

So significant was Cross’s involvement in those early days that he was chosen to receive the club’s first ever honorary Life Membership, in 1901 – a huge tribute.

The Cross family connections with Collingwood remained strong. It was brother Joe who donated the gold medallions that were presented to the players and officials after the club’s 1896 VFA Premiership triumph. And Alfred’s sons continued the tradition of family involvement – albeit in a slightly peculiar way.

One of his sons, Vivian, joined the team on its trip to South Australia in 1905 and even played in the game against a Broken Hill combined side. Alfred’s youngest son, Harrie, went one better, playing an official game for the Magpies in 1917 when another player pulled out at the last minute. Harrie pulled on the boots at short notice and acquitted himself capably, kicking a goal. He even appears in the official Premiership photo for that year. (A third son, Charles, was a champion rifleman who represented Australia in shooting competitions.)

Alfred remained as vice-president until after the 1911 season, when founding President William Beazley retired. The committee wanted Cross to assume the role – in part as reward for his 21 years a deputy – but he was reluctant. “Since the old Britannia junior days Mr Cross has held office, and has constantly devoted his energies to the welfare of the club,” noted the 1912 annual report. “With his natural modesty, Mr Cross at first refused, but yielding to the unanimous wish of his fellow officers, eventually accepted the honour.”

But Alfred Cross’s reluctance was real, and after little more than a year in the job he passed the baton on to Jim Sharp, despite the rest of the committee wanting him to remain in the job. Instead he returned to a vice-presidential role until his retirement in 1921.

Upon his retirement, the club paid him a fulsome tribute in its annual report. “Whenever the history of this Club is related, the name of Alfred Cross naturally recurs. He was intimately associated with its foundation, and until he retired from office during last year maintained a very active and prominent interest in its work. During the Presidency of the late Mr. Beazley, Mr. Cross presided at all Committee meetings, as also during his own brief term as President … A copper tablet has been placed in the Committee Room to commemorate his remarkable service, and Mr and Mrs Cross were presented with a handsome sideboard, suitably inscribed, to remind them of the high esteem in which he was held by the Club.”

But that wasn’t the end of Alfred Cross’s contribution to the Collingwood Football Club. Through Verey & Cross he remained one of the club’s major donors every year from 1892 until his death in 1934. And one of the last things he did before he died was to provide a cup for the fledgling Collingwood schoolboys competition.

In the end, it is an impressive CV for an official: vice-president for 28 years, President for one. The club’s first ever Life Member. A sponsor, benefactor and provider of trophies. And most importantly of all, one of this club’s founding fathers. Alfred Cross’s name may not be well known today, but he was a huge figure in the club’s first 40 years.