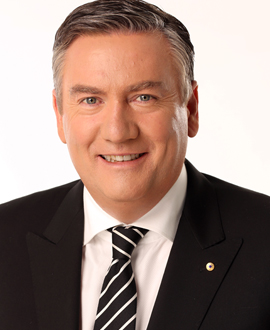 He and his three-man team comprising Alex Waislitz, Ian McMullin and Brad Cooper joined the Collingwood board at an extraordinary general meeting at the Camberwell Civic Centre.

McGuire replaced Kevin Rose as President, though Rose remained on the board until 2007.

A long forgotten footnote is that the Collingwood members had to alter the club’s constitution to allow Waislitz and McMullin to be eligible for the board.

Previously, the pair was ineligible as neither had been social club members for the previous 24 months.

The Age’s Greg Denham reported that one of McGuire’s priorities was “to lift Collingwood from the bottom half of the ladder. However, he was clever enough not to predict when Collingwood again be a finals series contender.”

“We hasten slowly. The future of the Collingwood Football Club is going forward and we are going north on the AFL ladder from now on,” – Eddie McGuire, 29 October, 1998.

Denham said that McGuire’s wish was to “put a bit of passion back into the place.”

“People will have to be accountable, but our main focus is the need to start winning games again, and some tough decisions have to be made and will be made. At the end of the day it doesn’t matter if you’ve got the best marketing and the best sponsors, unless you win when you go out and play football,” – Eddie McGuire, 29 October 1998.

“From now on, let there be a clear message go out to the opposition and to us, that only the best from now on will be accepted at Collingwood. There will be no more mates’ rates, or anything like that; people will be accountable and we are really going to start to make things happen off the ground,” – Eddie McGuire, 29 October 1998.

Ahead of the extraordinary general meeting, The Age’s Jake Niall forecast the influence McGuire would have on both the club and the competition:

“Tonight, he will achieve a much less contentious constitutional rearrangement that will change his busy life, the Collingwood Football Club and perhaps football forever.”

Niall reported that McGuire would “accomplish a rare feat – a bloodless coup at Collingwood.”

A result of McGuire’s tenure has been stability at board level into the new millennium.

“I don’t think that I have got all the answers, by any stretch of the imagination. My philosophy has always been that you get the best people around you and that gives you the best chance. I’ve been in the lucky situation for the last 15 years where I’ve not only been able to watch but to analyse everyone in football. I think I have a reasonable idea of who is alright. At the end of the say I think we’ve picked up a couple of gems. The next step is to pick up a few more who can play!” – Eddie McGuire, In Black and White Magazine, March 1999.

“I think we’ve taken a realistic approach. It’s a tough caper this footy business. Only one team a year wins. But there are a number of other measuring sticks (such as) supporter and member satisfaction, for a start. I think the financial viability of the club, long term stability, club structure, all these type of things are what we should be measured on as well. The ultimate measure, of course, is results on field,” – Eddie McGuire, In Black and White Magazine, March 1999.

“My one ambition in coming in as President of this club (is) that this club is a lot better and a lot more secure than when I took over in October 1998. I had real fears last year that for the first time ever, Collingwood supporters were dropping their heads and giving it away. And I felt shattered last year,” – Eddie McGuire, In Black and White Magazine, March 1999.

“This is a good way to do it (saying goodbye to Victoria Park). What a perfect way to end the Millennium. The last football home and away match of the Millennium will be at Victoria Park, and in the new Millennium we’ll have fantastic facilities, a new approach, a new attitude,” – Eddie McGuire, In Black and White Magazine, March 1999.

Tony Shaw’s departure, 1999 – With only one win from the first 12 games, the time had come for Shaw to depart the club after four years as senior coach. McGuire oversaw a dignified end to the club legend’s tenure that saw Shaw see out the season and blood several youngsters who would become the backbone of the club’s charge up the ladder.

Last game at Victoria Park and collecting a wooden spoon, 1999 – The game was rapidly evolving and the much-loved Victoria Park was being left behind in the modern world of Australian football. Collingwood brought the curtain down on Victoria Park with a match against Brisbane in the final round of a season that produced only the second wooden spoon in its history.

Mick Malthouse arrives, 1999 – McGuire was a key factor behind Mick Malthouse’s decision to depart West Coast and take the reigns at Collingwood ahead of the 2000 season. Coupled with the recruitment of highly rated youngsters Josh Fraser, Ben Johnson, Shane O’Bree and Leon Davis, it marked the rebirth of the club, one that would eventually culminate in a premiership a decade later.

Life in the box, 2002 – Although he was the logical front man for the first year of Channel Nine’s football coverage, as club President, McGuire created controversy when he called Collingwood’s Friday night matches. His first match was a loss to Richmond in round one, but he managed to have a laugh when, after getting excited about an Anthony Rocca goal from 58m out, he yelled “I don’t care who’s watching tonight, I’m excited about that one!”

Grand Final heartbreak, 2002 – As much as the nine-point loss to Brisbane in the 2002 Grand Final stung the club, it marked its return as a respected and feared presence in the football landscape. Only three years after claiming the wooden spoon, McGuire watched on as a young Collingwood outfit surprised Port Adelaide in the Qualifying Final, outlasted the Crows in the Preliminary Final and stuck with the all-conquering Lions all afternoon in wet conditions in the Grand Final.

A Grand Final trouncing, 2003 – Hell-bent on redemption after finishing agonisingly close to its 15th premiership 12 months prior, Collingwood flew home in the second half of the season and looked set to reach the top of the mountain after knocking off Brisbane and Port Adelaide in the lead up finals. Unfortunately the club’s dream transformed into a nightmare before its eyes as the Lions mauled the Magpies by 50 points on the biggest stage of all.

Shift to the Olympic Park Precinct, 2004 – Under McGuire, Collingwood became one of the first clubs to shift from its spiritual home and start a new life at a cutting-edge training facility – a trend that has been followed by several clubs across the competition in the years since.

Two years in Sydney, 2006-2007 – McGuire shifted to Sydney to become the CEO of the Nine Network. He stepped down from his on-air commitments on The Footy Show and Who Wants to Be a Millionaire? as well as his AFL commentary.

A decade in charge, 2008 – McGuire’s 10th year at the helm arrived at an interesting juncture for the club. Having suspended Heath Shaw and Alan Didak for an off-field indiscretion late in the season and finishing eighth on the ladder after the home and away season, the Magpies drew a line in the sand and quickly bounced back up the ladder. They would reach the Preliminary Final in each of the next four seasons.

The coaching succession plan, 2009 – Ending months of conjecture over the coaching future of Malthouse and the recently retired Nathan Buckley, McGuire oversaw a deal that would see Buckley join Malthouse as an assistant coach in 2010-2011 before taking the reigns in his own right in 2012. McGuire called it “a humbling experience as a Collingwood person.”

The ultimate glory, 2010 – Twenty years on from the 1990 premiership, Collingwood finally scaled football’s Mt Everest in claiming its 15th flag against St Kilda on 2 October. But there was so much more to it than that. The Magpies had to survive only the third drawn Grand Final in history a week earlier before backing up to claim the ultimate prize seven days later.

Thirty minutes from back-to-back, 2011 – Collingwood trailed Geelong by only seven points at three quarter time in the 2011 Grand Final. It would not score a goal in the final term as the Cats ran out 38-point victors. The match marked the end of the road for Malthouse as coach and ushered in the Buckley era.

Bucks takes charge, 2012 – Nathan Buckley’s time as Collingwood coach started with a loss to Hawthorn in the first game of the 2012 season but the year ended with a Preliminary Final appearance against eventual premiers Sydney.

Fifteen years at the helm, 2013 – McGuire marks 15 years as Collingwood President on his 49th birthday.

Biography
Eddie McGuire is one of Australia’s most accomplished and versatile television personalities.

Twenty-five years of award-winning television experience led to his appointment as CEO of Nine Network Australia in December 2005, before deciding in May 2007 to return to his favourite place in the industry – in front of the camera as a consummate presenter.

Eddie’s meteoric rise to fame escalated when he joined the Nine Network in 1994 as a sports commentator after starting out at Network Ten as a sports journalist in 1982. One month after moving to Nine he was hosting The Footy Show (AFL). His vision to create an entertaining and informative AFL program has seen The Footy Show become a six-time Logie winner and certified ratings phenomenon over 13 years.

In 1999, the Nine Network capitalised on Eddie’s popularity and cast him as host of Who Wants To Be A Millionaire.

By 2007, Eddie McGuire was considered to be Australia’s ultimate quiz show presenter when he headlined another ratings blockbuster – 1 vs 100.

His hosting roles took on an international flavour when he anchored the 1996 American NFL Gridiron coverage which was judged the best overseas coverage of the Superbowl. Ed also co-anchored the 1998 Commonwealth Games from Kuala Lumpur and for four consecutive years co-hosted the Australian Formula One Grand Prix. He also showcased his diversity by welcoming in the new century hosting the Nine Network’s New Year’s Eve Millennium telecast, the opening of Melbourne’s world renowned Crown Casino and was the guest host of The Midday Show and Today Show.

McGuire hosted the number one program of 2002, Test Australia: The National IQ Test, and when Nine made history by securing the AFL Football Rights, he spearheaded the Friday Night Football commentary team in its debut season with the network.

After forming McGuire Media in 1997, Eddie’s own production company has produced a number of football specials and Centenary of Federation specials for Nine, as well as the children’s program Screema! for pay television and the Art & Identity documentary for the ABC.

Eddie was responsible for bringing AFL coverage to FM radio and McGuire Media packaged Triple M’s top-rating football match coverage. More recently he has been amongst the action calling AFL games for Melbourne’s SEN radio station and currently hosts Triple M’s Hot Breakfast which can be heard between 6-9am weekdays in Melbourne.

In 1998, McGuire represented the Australian Republican Movement at the historic Constitutional Convention in Canberra- a move to have an Australian as head of State. He was elected with more than 400,000 votes by the people of Victoria.