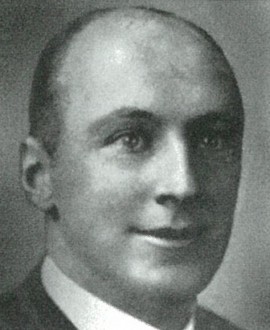 Harry Curtis served the club as president for a record 26 years.

Even now it seems unfair that the man who holds the record as Collingwood’s longest-serving President had his tenure ended via one of the most bitter internal disputes the club has ever known. Harry Curtis deserved a much more dignified end than that.

Curtis was a wonderful club leader who presided over the most successful period in Collingwood’s history. He took over the job immediately after he’d ended his highly successful 10-year stint as a player – a retirement that had in part been brought on by the pressures of Curtis’s business life.

Harry was a qualified accountant who worked as the secretary of the Berry & Roche Cycling Company. He took his business role very seriously, and the demands of his job had seen him devote less and less time to training, so in the end he decided to give footy away after the 1923 season.

Jim Sharp, a former Fitzroy player, had been President since 1913 but resigned during 1924. Curtis was chosen as his replacement, the rest of the committee having been impressed with his leadership qualities while captain in 1923, and his obvious business acumen. He’d also filled with distinction the important post of secretary of the ‘Pie and Saveloy Club’ at Collingwood, where his consumption of each was at record levels.

Harry Curtis might have been the youngest club President in League history but he was regarded as the right type of man to have around a football club. He was popular with the players, respected by the officials and a “straight goer” in every sense of the word. He was also an outstanding public speaker (he was a keen amateur actor) who took to making regular speeches after matches. Importantly for the role as President, he also possessed a delicacy for handling tricky situations.

He also quickly proved that he could make the tough decisions necessary to make the club successful. After his first two years at the helm yielded successive runners-up finishes, Curtis and the rest of the committee got rid of four players – including the captain, Charlie Tyson. Those moves led directly to the Machine team era, with the Pies grabbing four flags in a row and six in 10 years.

By now, Collingwood was considered a byword for stability and sound management. Curtis, Frank Wraith (secretary) and Bob Rush (treasurer) were considered as good an administrative team as any in football. The three were at the forefront of some memorable off-field battles, including one with the cricket club for control of Victoria Park in the early 30s, and another with the seconds’ committee which precipitated the fiery 1939 elections.

But perhaps the most far-reaching achievement of Curtis’s reign was securing a liquor licence for Collingwood at the start of the 1940s. The Pies became the first League club to have their own liquor licence, and the financial benefits that flowed from the move – and the subsequent development of the Social Club – set the club up for decades. It was the far-sighted thinking and brilliant political work of Curtis & Co that made it happen.

From his ascension to the role in 1924, all the way through to early 1950, Curtis carried out his duties with firmness, sound judgement, impartiality and a high respect for the office, the club and the fans. But the 1940s were a difficult time for the club, and rumblings had started even before coach Jock McHale quit on the eve of the 1950 season.

The tumult that followed divided the club. Half the committee wanted popular captain Phonse Kyne to replace McHale; the others wanted reserves coach Bervin Woods. Curtis had the casting vote and opted for Woods, amidst claims that promises and deals had already been done. But the fans rebelled, forcing out Woods after less than a week in charge. The recriminations at board level were fierce, with Curtis, Rush, Wraith and the rest of the Woods supporters thrown out at a special meeting weeks later.

It was a messy and wholly unsatisfactory end to a Presidential reign that had lasted nearly 26 years, and which had produced a string of extraordinary achievements both on and off the field. Add in another 10 years as a player and it’s easy to see why Harry Curtis holds an exalted position in the history of the Collingwood Football Club.