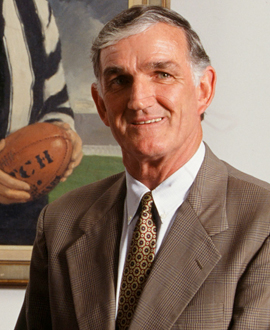 The one word you think of when trying to sum up Kevin Rose’s contribution to the Collingwood Football Club is selfless.

As a player, he gave his all for the team. As a president and board member, he always aimed to do the same, even if the latter would prove more arduous.

A self-effacing person, even Rose would admit that his three years as president came at an extraordinarily difficult time for the club. And his tenure during the mid-to-late 1990s coincided with a changing environment in the AFL, at almost the juncture when clubs went from traditional, semi-professional teams to fully professional national brands.

And even if he didn’t have the team success as president, he remained on the board of his successor, Eddie McGuire, for several years after, which would prove to be more fulfilling.

Rose always seemed a natural fit for the Collingwood board after 159 games with the club, between 1958 and 1967. He was a successful businessman, who founded and ran Kevin Rose Food Services, but he resisted the temptation until he received a phone call from Magpie president Allan McAlister in late 1995, pleading with him to take over the role McAlister had had for 10 seasons.

Rose’s sense of duty meant he answered in the affirmative, though he was under no illusions about the task at hand. Only five years had elapsed since the 1990 premierships success that was meant to safeguard Collingwood forever, but the club was under significant pressure – financially the club was under a significant strain, its home ground was all but falling down around them, and new coach Tony Shaw was taking on a battling playing list.

He insisted he had “no magic wand” to cure the club of its issues, and made it clear he would not be the outspoken and often controversial leader McAlister was.

“I would think every area of the club has to show some improvement,” he said. “I don’t think we are performing as well as we’d like on the administration side and, obviously, neither is the football side.”

At 56, Rose said he did not want to be a long-term president. He would stand to that word, serving for three completed seasons, during which time he faced a range of difficult issues, and yet confronted them with integrity.

He and his board sought new revenue streams and opportunities. Some flourished, and others, such as the joint partnership to set up the Collingwood Warriors soccer club, didn’t.

Rose desperately wanted to improve the club’s financial bottom line, and began selling off the many properties that had been bought under McAlister’s reign.

An embarrassing situation arose in late 1997 when Collingwood’s chief executive John May struck a deal with telecommunications company Viatel that had been promoted as “the most lucrative in football”. It later emerged that the company was unable to meet its financial obligations. Rose promptly arranged Primus and Spicers Paper as replacement sponsors, but the damage was done from a publicity point of view.

But it was the football side of things that was causing the club as much angst as anything else.

There was success, though, in keeping a champion. The Magpies were able to retain Nathan Buckley, thwarting a lucrative bid from the newly-formed Port Adelaide to recruit him. It would prove to be a critical moment.

Shaw had been re-appointed for two more years at the end of 1997, but along with it a provision from Rose that the coach needed more help, and the club’s recruiting philosophies needed to be addressed.

But a damaging leak from within the club that it had sounded out Sydney assistant coach Damien Drum in late 1998 as a coach came to public light, which infuriated Rose and embarrassed Shaw, who still had a contract.

At the time, Rose said: “I would feel very annoyed and disappointed if it (the information) was coming from our board or an area close to our board … I would feel extremely let down if that’s the case.”

Drum would chose the vacant Fremantle coaching position, and Shaw agreed to see out the last year of his contract, 1999.

After Collingwood’s 55-point loss to Carlton in the penultimate round of 1998, a new candidate for the presidency emerged. Media giant Eddie McGuire, yet to turn 34, but already one of the most influential men in football, offered a new vision for the future and was determined to drag the Magpies into the 21st century.

In keeping with what he had done throughout his time at Collingwood, Rose took the selfless approach, and embraced McGuire’s interest, knowing it would be good for the club that he loved so dearly. At a club in which bitter elections are almost a tradition, Rose paved the way for a smooth, bloodless transition and even remained on the board to help out.

He acted as a board member and sounding board to McGuire until 2007. But he also remains almost a patriarch of the club to this day, serving in a number of roles, including on Collingwood’s Hall of Fame selection committee.

Rose might not have had the success he wanted as president, but he will be remembered as a man who had a hand in preparing the club for its departure from Victoria Park, looking towards a new training base.

When he was granted AFL life membership in 2013, McGuire summed up his selfless qualities – “His service and passion for the club is now into a sixth decade, a wonderful contribution few could equal.”