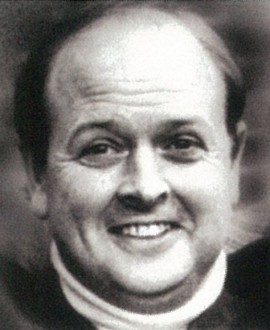 Ranald Macdonald and the ‘New Magpies’ were swept into power in late 1982 with a massive mandate for change, but in the end, that change was so sweeping and so costly that it took the club almost to breaking point.

No one, least of all Macdonald, wanted that. But it was the by-product of a period of modernisation during the mid-1980s that changed Collingwood’s outlook forever.

The seeds of the ‘New Magpies’, and indeed Macdonald’s presidency, were sown from the failure during the Hickey years to secure the club’s elusive 14th VFL premiership, and also the sacking of coach Tom Hafey midway through what was a disastrous 1982 season.

There had been talk of a board challenge even before Hafey’s controversial axing, but that only added fuel to a gathering fire of dissent from those who felt the club needed to start asserting itself more aggressively.

Ranald Macdonald, a well-known media identity and one of the last members of the Syme family to run The Age newspaper in Melbourne, became the face of the ‘New Magpies’ – a group consisting of seven businessmen and former players who argued that a different approach was needed to transform one of the most traditional VFL clubs.

Among the ‘Magnificent Seven’, as they were dubbed, were three former players in Len Thompson, Terry Waters and Brian McKenzie, as well as businessman and one-time accountant Allan McAlister.

Collectively, they promised to cast off some long-held traditions that had formed part of the club’s DNA for generations, with Macdonald’s team suggesting the Magpies had become too staid and conservative.

Macdonald didn’t quite promise a flag, but he did say: “Collingwood … can be organised to win premierships on a regular basis.” But he did guarantee that, if elected, the ‘New Magpies’ would embark on the biggest recruiting campaigns ever conducted. No stone would be left unturned in the chase for the club’s next flag.

A well-attended rally at Dallas Brooks Hall showed the enormous level of support the new group had and the incumbent board, led by John Hickey, had little chance of stopping the momentum. In the end, the ‘New Magpies’ convincingly won the election and Macdonald was the overwhelming choice as president.

Yet from the outset, there was tension at board level. McAlister sought John Kennedy as coach, while the football directors chased – and secured – South Australian coaching great John Cahill as the man to lead the Magpies. It was a significant appointment as Cahill was the first “outsider” appointed to coach the club.

Macdonald’s promise to attract the best talent saw Collingwood recruit the likes of Richmond pair David Cloke and Geoff Raines, as well as high-priced interstate players Mike Richardson, Gary Shaw and Greg Phillips, and other players of lesser note.  Shaw’s transfer fee alone was more than $300,000 – the price of a half-dozen houses in some suburbs back then.

The New Magpies even changed one of the most famous lines in Collingwood’s theme song – “All The Premiership’s A Cakewalk” – and replaced it with “There Is Just One Team We Favour”, even if fans didn’t warm to it.

But delivering the promised success proved difficult, especially given some recruits did not reach the lofty standards expected. The Magpies narrowly missed the finals in Macdonald’s first season as president, but rallied with a much better performance in the second season, making it through to the preliminary final against Essendon, only to lose by 133 points.

Cahill left the club after two years, amid suggestions of some tension, and disunity, while Collingwood’s financial situation had become a far more significant concern.

Macdonald looked to former club coaching great Bob Rose to take the club forward on the field. The club missed the finals in 1985, finishing seventh, and had great hopes for the 1986 season, with retired Hawthorn champion Leigh Matthews appointed as Rose’s assistant coach, with the promise of the main position when he was ready.

But Matthews’ elevation to the senior coaching role came sooner than anyone had anticipated after one of the most dramatic days in Collingwood’s history. Following a poor start to the 1986 season, and reports the club’s debt had spiralled to almost $3 million, Rose resigned as coach to hand over to Matthews; the players were asked to take a 20 per cent pay-cut; general manager Peter Bahen was sacked and Macdonald resigned from the presidency.

Bahen summed the mood up when he said: “Unfortunately, with everyone screaming for blood, there had to be a few bodies.”

Macdonald was initially going to dig in and fight, but realised the only alternative was to walk away. He would blame the crisis on two things – “first of all, the projections of money coming into the club after the last elections were overinflated, and secondly, there was such pressure on to get (recruit) players … the supporters were expecting more than just a long-term building effort.”

He explained further in a letter to members, saying he took full responsibility for the debt, which had been predominantly caused by the transfer fees that had to be paid out during the recruiting spree.

“As always, the Collingwood Football Club is far more than any one individual. The interests of the club are paramount,” Macdonald wrote. “With the strength and dedication of the Magpie Army, it would be wrong to underestimate the power of recovery of Collingwood – both as a team and as a club. We will quickly become competitive again, if we pull together.”

The club would do that, and one of the ‘New Magpies’, Allan McAlister, would take over from Macdonald, and would be the president who oversaw the end of the club’s embarrassing premiership drought four years later.