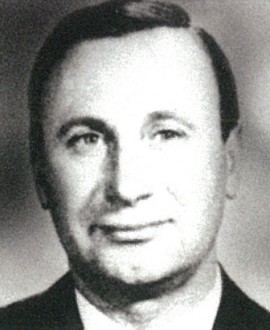 No one from the Sherrin family ever played a senior game of football for Collingwood, but the service to the club afforded by three of its members across more than 80 years was of enormous significance.

T.W. Sherrin was the famous manufacturer of footballs, and he was not only a founding member of the Collingwood Football Club, he was also the club’s first No.1 ticketholder. He served on the committee for two decades from the foundation of the club until his death in 1912.

His nephew, J.S ‘Syd’ Sherrin, a noted amateur boxer and boxing referee, took over the family business, having served as an apprentice in the Collingwood factory to his uncle. He would also assume a role with the Magpies as a committeeman and later a vice-president for almost 30 seasons – from 1914 until his premature death in 1942, after a long illness following an accident when he was struck by a car.

Syd’s son, Tom, would carry on the tradition his great uncle and namesake started a half-century early, first by running the company that made the family name famous, and also on the committee of Collingwood Football Club.

He assumed his father’s role on the committee after Syd’s passing and would come to serve the Magpies for more than 30 years in roles that included vice-president and, most tellingly, as president.

His time as president, from 1963 to 1974, was a controversial span of time for a variety of reasons, most notably because of the bitter election campaign that saw him rise to the role and divided the club into opposing factions.

Cruelly, those years would see Collingwood endure a number of Grand Final heartaches and give rise to the term ‘Colliwobbles’ to define the club’s agonising near misses through the 1960s and 1970s.

When Syd Coventry announced he was stepping down as president at the end of 1962, the search was on for a successor. Jack Galbally, John ‘Jiggy’ Harris and Sherrin were the three candidates and it was agreed that a secret ballot at committee level would determine the winner. In the end, Galbally was chosen, and that was meant to be the end of the process.

But Sherrin had been approached by prominent club members who were desperate for him to push the debate to an election and a petition was circulated. And the man with one of the most famous names in football decided to renege on the previous deal as he felt he was the best person to lead the club into the future.

It led to the ugliest election in Collingwood history as the Galbally group and the Sherrinites – as they were called – battled it out in a campaign that divided not only the club, but also put coach Phonse Kyne at odds with his players. The ramifications would haunt the club for almost a generation.

Kyne supported Galbally, but most of the players, including captain Murray Weideman, were in Sherrin’s camp. Some players were under the misapprehension that Kyne had stated that the coaches and the players had endorsed Galbally, though reserves coach Neil Mann alluded to that. So it proved that a number of players actively campaigned for Sherrin on election day, which was an election godsend for the man who wanted to be president.

It was, as the Age highlighted at the time, “the fiercest struggle” for the presidency in the history of a club that had long prided itself on stable administration, other than a few notable exceptions.

Sherrin, 48, was the clear winner of the election, scoring 1740 votes to Galbally’s 834, and the photo in the newspaper showed the protagonists shaking hands – with tension still clearly on display – after the result was tallied.

The new president was “chaired to the official stand on the Collingwood football ground, pale-faced and noticeably nervous”, as one newspaper recorded. He spoke to the crowd, saying: “I have spent many sleepless nights in the past three weeks, wondering whether I have been the terrible person who had betrayed the club.”

“I can assure members that from the bottom of my heart I will do everything to boost this club. Let us all forget the bitterness and quarrels that may have happened – they are all over now.”

Galbally offered Sherrin “the best of luck … may you work for the glory of Collingwood.”

But the bitterness, even if subsided for a time publicly, was always in the background for those who took sides in the fight, and it would re-emerge when that glory failed to eventuate.

Sherrin appointed Bob Rose as coach for the 1964 season and the Magpies lost two Grand Finals in his first three years by a total of five points, with both losses coming in heartbreaking fashion.

The cruelness would continue. In 1970 the Magpies appeared destined for that elusive premiership when they led Carlton by 44 points at half-time. But the Ron Barassi-inspired Blues produced the most famous football comeback in history to deprive Collingwood – and Sherrin – once more.

Ahead of that season, the club oversaw the recruitment of its first highly-paid interstate recruit, Peter Eakins. The lucrative deal saw Collingwood captain Des Tuddenham and star ruckman Len Thompson withdraw their services for three weeks of the pre-season in a pay dispute. Not even an act of brinkmanship from the Sherrin administration – bringing in a new match payments system under a sliding scale – could avert the action.

Both players came back to the club, but within hours of their return, they were replaced from the leadership roles by Terry Waters (captain) and Wayne Richardson (vice-captain).

The following season Rose tried to have Tuddenham reinstated as captain, only for the board to vote against his reinstatement, and the divisions caused by the incident damaged the unity of the team at the time.

Off the field, Sherrin and his committee sought to upgrade Victoria Park, and for a time, they wanted to create a “mini-MCG” for their home base. Two grandstands were built during this time – the first on the outer side of the ground that would become the Rush Stand (1966), and the other behind the goals at the Johnston St end (1969) which didn’t have a name by the time Sherrin decided to retire from the presidency at the end of the 1974 season.

It was fitting that it would become the Sherrin Stand, not only because of Tom’s time as president, but by acknowledging the incredible legacy that the Sherrin family had made to the Collingwood Football Club.

Sherrin left office a shattered man; his dream of overseeing a premiership unfulfilled. For a time, he stayed away from football, but his family ties meant that was never going to last forever.

Tragically, it was his love of the club that ultimately cost him his life. As a fan, he travelled down to Kardinia Park for the club’s Round 1 game against Geelong in 1978, and was delighted to see the Magpies win the match.

Sherrin told reporter Trevor Grant after the match: “That was a great day.”   On the way home from Geelong he was involved in a collision with a truck and smashed into a pole. He died soon after, aged only 60, and the incident cast a pall over Collingwood.

General manager Peter Lucas eulogised: “He was among the top bracket of football administrators and gave our club a lifetime of loyal and dedicated service. Tom was a quiet man who expressed his view forcefully.”