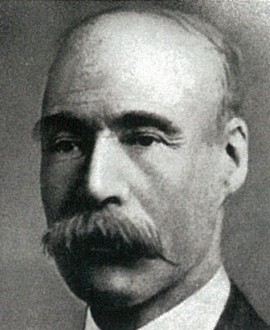 Collingwood’s founding President was a man of compassion, vision and foresight. William Beazley’s name might not be well remembered today, but his influence on the Collingwood Football Club was profound. In fact, without him, the club might not exist at all.

A local politician who had several stints as the mayor of Collingwood and also served many years as the suburb’s MLA, Beazley was born in London in 1855 but arrived in Australia just a few months later.

Young William became an apprentice saddler and harnessmaker, then later an estate agent. He was active in several local businesses (including the Denton Hat Mills) and with co-operative building societies, friendly societies, technical education, as well as local swimming and sporting clubs. He was also elected to the Collingwood Council, and as one of the two local representatives in the Legislative Assembly of the Victorian Parliament, and used his increasing political power to advance the working class interests of his constituents. Nowhere was that better demonstrated than his role in the creation of the Collingwood Football Club.

Beazley’s first major sporting involvement was as one of the leaders of the Capulet Cricket Club, which played on Victoria Park. He then became involved with the Britannia Football Club, which used the same venue. He lived with his mother in Bath St behind the ground, and as the 1880s unfolded became an increasingly strong advocate for the need for Collingwood to have its own football team – one that was truly representative of the suburb.

In 1889, a group of Collingwood residents and business leaders met in a Johnston Street hotel and formed what they called the Collingwood Football Club. But it really was a football club in name only. The group appointed Beazley and local entrepreneur and parliamentarian George Langridge as the men to approach Britannia about forming an alliance.

Initial approaches from the group to the VFA were rejected, with the Association reluctant to admit a team as disorganized as the Brits, especially when it had enjoyed relatively little success. The ground was also not up to the required standard. But the political clout of Beazley and Langridge ensured the issue didn’t die, and two years later it was Beazley who convinced the Council to spend £600 upgrading and extending Victoria Park, in order to impress the VFA.

Community, business and political leaders kept pushing to form the Collingwood Football Club, and Britannia eventually disintegrated under the pressure. After years of lobbying, the VFA finally relented and admitted the fledgling club for the 1892 season. Collingwood, the inner-suburban, working-class community that symbolised struggle, had won the battle. They could finally boast their own football team.

William Beazley had played a huge role in that battle. Without his influence and persistence it is almost certain the club would not have come into being. So it was an immensely proud President Beazley who stood in front of the crowd at a public meeting to endorse the creation of the club at the Collingwood Town Hall in February of 1892.

That evening, Beazley told the crowd that the new football club would be a boon for the city, that its matches would ‘draw immense crowds and be the cause of much money being spent in the district’. But he hosed down expectations of immediate success by demanding that fans remain ‘true to their colours, and not be dispirited if they at first lost matches, as they would require one or two seasons to lick them into first-class football’.

In hindsight, Beazley was laying the foundations for the ‘Side By Side’ ethos that remains a cornerstone of the club today.

But even more important than getting the club off the ground was keeping it going. The club was born in the middle of a major depression that hit the suburb of Collingwood harder than most. The 1890s were tough times. On the field, Collingwood’s fortunes improved gradually with each passing year. But the depression deeply affected all the VFA clubs, and Collingwood soon found itself in dire straits: it was more than £1000 pounds in debt and attendances and memberships plummeted.

Beazley was not a hands-on President in the day-to-day sense. His parliamentary commitments made it difficult for him to attend committee meetings, and much of the management of the club fell to his vice-president, Alfred Cross, and newly appointed secretary Ern Copeland.

But it was Beazley who provided the overall direction and, significantly, the power and influence to get important deals done. It was under his leadership that Copeland introduced a range of financial disciplines and fund-raising initiatives that saved the club from financial ruin, allowing Collingwood to outlive the depression.

Central to that was the growing importance of the footy club, and Victoria Park, as the hub of the community. The football club’s links with the community were already strong: they had helped propel the club into existence in the first place. But Beazley fostered and developed those links even further, forming a bond between the club and the suburb – the supporters – that was like no other. Many argue that the club’s famously fanatical support from its fans today can still be traced back to the spirit engendered in those formative early years.

As the club’s financial position improved, success followed. Beazley was ecstatic when the first flag came in 1896, and he oversaw the move to join the breakaway VFL in 1896/97. Two early VFL Premierships followed, and the Magpies were away. He also became President of the Collingwood Cricket Club upon its formation in 1906, just as he had become the founding President of the Collingwood Junior Football Club in 1893, which became the unofficial ‘feeder’ club for the senior team. He loved nothing more than to help guide local sporting teams.

William Beazley remained as Collingwood President until his death from pneumonia in 1912, aged 58. All the Collingwood players and officials walked at the head of the cortege as a sign of respect. They recognised it had been Beazley’s bold vision which ensured the Collingwood Football Club became a reality in the beginning, and his leadership that helped keep it afloat then allowed it to flourish. In the process, he ensured that the football club retained an intensely close bond with the community and the Magpie fans – something that endures today.