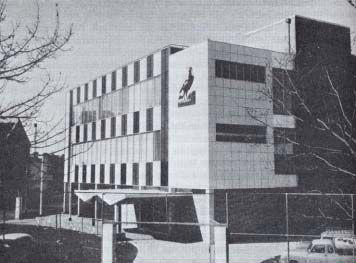 Footy fans have always liked a drink before, during and after games. And Collingwood fans are no exception. So the club took this connection and built on it, creating a social club and being awarded football’s first liquor licence – an extraordinary feat that changed Victoria Park, and the way VFL clubs operated, forever.

There had actually been a ‘liquor booth’ at Collingwood’s first game at Victoria Park in 1892. It was operated by the vice president and publican of the nearby Yarra Hotel, J. R. Bremner. Bremner’s hotel had doubled as the club’s first changing rooms in the opening weeks of competition before the first grandstand was finally completed. He ran the booth for two seasons, but quit the business in 1894, leaving a dearth of interested parties and plenty of thirsty football fans.

In the absence of a liquor booth, the black-and-white barrackers began to secure pass-outs at half-time of the club’s Victoria Park matches to rush off to the numerous hotels nearby. Collingwood Council then cemented the ‘half-time pass-out frenzy’ by deciding to ban alcohol altogether from the ground in 1903, making Vic Park just about the only teetotal ground in Melbourne. The club was frustrated by the fact that the money spent on beers went into the publicans’ pockets, not to the club or the Council. The club made many attempts to keep its fans in attendance at half-time by providing entertainment, including lacrosse, foot races and Aborigines displaying their skills with boomerangs. But all to no avail.

It took the club two decades to convince the Council to lift its prohibition at Victoria Park. In 1923, the Council belatedly restored the liquor booths at the ground, an action that went part of the way to halting the half-time trek to the local hotels. By the mid-1920s there were four booths operating at the ground between the first bounce and the final bell. They were always well attended.

When Frank Wraith took over as secretary of the club in the early 1930s, he was determined to make the most of this thirsty patronage. Wraith made the first tentative steps in trying to win the football club a liquor licence, something that was unheard of for a sporting club. It was a revolutionary plan and one that would take considerable time, effort and expense. But it was well worth the fight.

As the Second World War began, Wraith realised that the Tivoli (German) Club in Abbotsford would naturally lose its licence, thus creating an opportunity for the football club. The club initially offered to buy the Tivoli’s licence, but was rebuffed. Eventually, the Tivoli handed in their licence to the Liquor Commission. The club had to act, and quickly, and created the Collingwood Football Club Social Club as its vehicle.

The Liquor Commission queried the validity of Collingwood’s bid, arguing – not unreasonably – that it looked as if the Social Club had been created solely for the purpose of obtaining a liquor licence for the football club. But the Magpies lobbied hard, including using the services of the powerful and influential John Wren. Eventually, after much legal wrangling, the Collingwood Football Social Club was granted a certificate of registration on 19 February 1940. The club was officially opened on 23 April 1941 and proved an instant source of revenue. The small number of Social Club members flocked there, and it would continue to grow in importance over the years.

The 1940s was a bleak period in terms of on-field success, but the spirit seemed to return to the club when the war concluded in 1945. The team made the finals again, and supporters and members returned – so much so that, in 1948, a scarcely believable 47,224 fans crammed into the ground for a game against South Melbourne.

The football Social Club was also operating well. Membership had grown to 600 in 1947 and there was a 12-month waiting list. The club’s long-serving secretary, Gordon Carlyon, recalled the early days of the Social Club: ‘The club rooms were rather like a speak-easy often featured in the movies. At the door at the end of the Ryder Stand, people wishing to enter had to press a door bell. A voice rang out — name and number please! A few minutes elapsed before a steward let the person in.’ Carlyon said gambling and swearing were ‘strictly prohibited’ and a 2s bet on a game of billiards once resulted in a member being suspended for three months.

The Social Club was booming. And it would help spark a period of major redevelopment at Victoria Park.