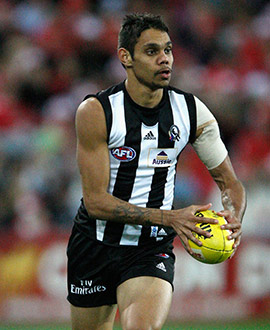 If it hadn’t been for two knee reconstructions and two shoulder surgeries, Brad Dick’s time at Collingwood might have been more significant than the series of cameos he provided across 27 games and 32 goals.

He might even have pushed to be a part of a premiership side.

Instead, each time the lightly-framed small forward and part-time midfielder showed great promise in a handful of his matches, including on a few big-occasion moments, injuries seemed to follow. Each time he looked to secure his position within the side, ill-fortune seemed to follow.

Dick fits perfectly into this one-hit wonder series, for his signature performance came when he kicked five goals on the Queen’s Birthday stage against Melbourne in 2009. But there were a few other moments that stood out, including the following year’s corresponding match against the Demons, and in the 2009 semi-final win over Adelaide.

There were times, when injuries continued to derail his momentum, he felt as if he might have to give the game away. Each time he worked to come back.

“Plenty of times I thought I’d chuck it in, but I always thought I needed to have a good crack at it,” Dick said about his injury issues. “I also wanted to play AFL football.”

Dick’s father, Kim, came from Goomalling, a small town just over 130km north-east of Perth (the town’s name is inked on the inside of his right arm). But Brad was raised and learnt his early football skills in Geraldton, more 400km to the north of the state’s capital.

He had a strong football pedigree. His uncle, Willie Dick, played seven games for Essendon in 1992 in a brief AFL career cut short by homesickness which saw him return to Perth, the city and the WAFL club.

Brad was small and scrawny as a young footballer, which saw him teased by some of those he played with and against. But when he left Champion Valley Football Club, in Geraldton, for East Fremantle, he was intent on making an impression. He managed that in a short time, and attracted the interest of Collingwood, who claimed him as pick 44 in the 2006 national draft.

It was the same draft which delivered future Magpie premiership players Ben Reid (pick No. 8), Nathan Brown (No. 10), Chris Dawes (No. 28) and Tyson Goldsack (No. 63).

Weighing 66kg at the time, Dick grew up as a Magpies supporter and watched the draft unfold on the internet, believing he was headed either to Fremantle or Collingwood.

“When Collingwood called up my name I was absolutely rapt,” he told the Herald Sun. “Collingwood rang me but the Dockers rang me, too, the day before, and said they might pick me up. But (Collingwood recruiting manager) Derek Hine called and said if I wasn’t taken by the time they came up, they’d take me.

“I thought I sort of wanted to stay home so Freo might be okay, but then I dreamed of playing for Collingwood. Nathan Buckley was my hero.”

Dick made his AFL debut as an 18-year-old against Richmond in round three, 2007 before more than 70,000 fans, alongside another indigenous player Shannon Cox. It was also Alan Toovey’s first match, and ‘Toovs’ kicked three goals in the game, while Dick managed two majors in the 25-point win.

It was the first of six games he played in his debut season, but nothing seemed to go right for him the following season. In 2008 he suffered a season-ending left knee injury, which naturally enough brought on a wave of homesickness which almost sent him home, accentuated by the death of one of his cousins.

He told The Age: “When I did my knee … I’d had enough … (I) got a bit depressed and thought, ‘I don’t even want to be here’ because I wasn’t playing football. When my first cousin passed away it was the lowest point.”

“I was really down at that time anyway, being away from home and not playing football, so when that happened I went back home for the funeral and I didn’t even want to come back, to tell you the truth.”

His parents, Kim and Rosalind, and older sisters, Melissa and Cherie, supported him in the only way they knew how – they moved across the Nullarbor Plain to Melbourne. It worked, for Dick produced his best AFL season in 2009 on his return from the knee injury, playing 16 games with his benchmark performance coming on Queen’s Birthday.

On the same day Demon No. 1 draft pick Jack Watts played his first game, and was targeted by a number of senior Magpies, Dick’s performance had some wondering if they had witnessed the birth of a new star – in only his 11thgame. He had 16 disposals, kicked five goals and two behinds, earned the weekly Rising Star nomination, and even won a lesson on post-goal celebrations from Leon Davis.

His captain Nick Maxwell was another who encouraged him to get pumped up after kicking his goals – “Maxi always comes up and says, ‘Do it – just do it’. When I get excited, they get excited.”

Dick encountered a few shoulder problems during the 2009 season, though he kept playing on through to the finals.

In a semi-final clash with Adelaide, the Crows led by more than five goals just before half-time. But the young Magpies turned in a stunning second half, with Dick kicking two goals in a game-defining third quarter.

His coach Mick Malthouse said of Dick: “He has matured terrifically and for a young kid who doesn’t say a lot off the ground, he says a massive amount on the ground in terms of structure. He is a delight to coach and he understands the game structure beautifully and he’s prepared to work it.”

The Magpies ended up winning the match against the Crows, though Dick was held goal-less the week after as Collingwood lost to Geelong in a preliminary final.

Dick suffered another serious shoulder injury early the following season, but managed to get back – as a late withdrawal for Alan Didak – for the 2010 Queen’s Birthday clash. Just as he had the previous year, he hit the scoreboard, kicking four goals in a dramatic draw with Melbourne. Frustratingly, his shoulder gave away the following week against Sydney, which ultimately required surgery which kept him out for the rest of the season.

It was a costly injury. He had to sit back and watch the rest of the year as Collingwood went onto win the 2010 premiership. It was a shattering experience, and he couldn’t quite bring himself to attend the match, having asked Malthouse if it was OK if he could watch the game in television with his family.

“It was really good for all my mates and I was happy for the boys and the club, but inside I was pretty sad,” he said. “Now I just want to do whatever I can and give all I’ve got to get back into this team.”

Dick managed to play three AFL games in 2011, with his last one coming against Geelong in round eight. Bad luck intervened again. He suffered a second serious knee injury – this time to his right one – in a VFL game against Casey, another shattering blow as the Magpies went on to play more finals, including the losing Grand Final against the Cats.

He was delisted by Collingwood, but offered the chance to train with the club over the preseason in the hope of winning a spot on the rookie list. But frustrated by his run of misfortune, and eager to seek a change of fortune, Dick opted to return to Western Australia in an effort to reignite his AFL career.

He trained with Fremantle, though he was overlooked by the Dockers.

Enter Malthouse. With West Coast considering taking him, the club rang Malthouse in an effort to find out more about Dick’s capacity for hard work. The call convinced the Eagles he was worth a shot, and he was picked up as a rookie and was later added to the primary list. But sadly he couldn’t crack it for a senior AFL game in his two seasons at the club.

Dick played for East Fremantle in the WAFL – once kicking eight goals against West Perth. Despite on-going knee issues, he would go on to kick 47 goals in 2014 with Rumbalara in the Murray Football League; spent time with Southern Districts in the Northern Territory; once signed to play with his good mate and former Collingwood teammate Jaxson Barham at Lorne; and has played football recently in Kalgoorlie.

But, for Collingwood fans, he will always be remembered for his two Queen’s Birthday games (he got a Brownlow vote in one of them), and his 2009 semi-final efforts, more so than the injuries that hindered his career.