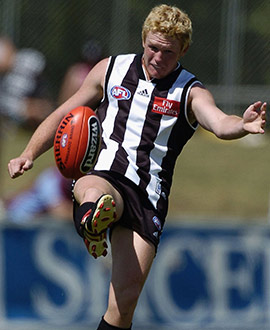 Collingwood’s David King had a much shorter league career than his North Melbourne namesake, yet his brief strut on the AFL stage wasn’t without a few attention-grabbing moments.

But the kid with the mop of blond hair and an uncanny knack of kicking a goal at the right time made an impact far exceeding his time in the black and white jumper.

Even before his debut game, this one-time Australian under 16s basketball representative who had once toured Mexico was a surprise draft selection for the Magpies. Then recruiting manager Noel Judkins plucked him out as pick 58 of the 2002 national draft as a 17-year-old, having played for Sacred Heart and in a few games with Glenelg under 17s and under 19s.

He moved across to Melbourne with two of his mates from Adelaide, who had also been drafted – Andrew Mackie, who was picked up by Geelong, and Jared Rivers, who was taken by Melbourne.

King spent the 2003 season playing with Collingwood’s VFL affiliate Williamstown, slotting into a team that at times included a kid called Dane Swan and a young rookie called Nick Maxwell.

His timing was almost impeccable. Not only was he one of Williamstown’s best players in the VFL Grand Final, playing a big role in the club’s premiership win, but it also put his hand up potentially for an even bigger call-up.

Collingwood coach Mick Malthouse ended King’s relative anonymity in the leading up to the 2003 AFL Grand Final when he suggested the 18-year-old could be a shock inclusion for the clash with Brisbane Lions. Never mind the fact he was still a teenager and that he hadn’t played a senior game, Malthouse suggested he was right in the mix.

During Grand Final week, Malthouse said of King: “His form has warranted being selected, we’ll certainly consider it. He wouldn’t be the first and won’t be the last picked in a Grand Final to play (his first game). I don’t think the birth certificate tells you anything. But you have to weigh up, is the player mature enough to take on the responsibility on that day?”

“Physically he is equipped, otherwise he wouldn’t be training. He’s a very tough-minded person and, at the worst, he gets an experience of training at a level that’s intense prior to a Grand Final.”

King would say the experience of training in front of so many Magpie fans at Victoria Park in the lead-up was “pretty exciting … there were more people at training than at half the games I’ve played in.”

No player had made his debut in a Grand Final since Collingwood’s Keith Batchelor in 1952.

Ultimately, Malthouse ultimately chose not to select King for the big match. He didn’t play, and the Magpies lost.

No one can definitively say how close King was to being chosen, though the fact he was in the mix showed the sort of impact the 82kg, 183cm utility had made in a relatively short time.

He spent most of the following preseason training for a defensive role. It was in that role that he made his debut – along with Luke Mullins – in the Round 4 clash with Fremantle. He spent most of the game on the bench, but gave a few glimpses in the second half, which saw Malthouse say after the game: “”I think David’s got a chance to play 50-100 (games) and he could play in excess of that if he gets his confidence.”

Most of his four games in a row came off the bench, and he returned to the VFL. He returned to the AFL side in Round 17 against the Western Bulldogs – as a forward – and he managed to kick the first of his eight career goals at the elite level. When he kicked his maiden goal, Collingwood players came from all areas of the ground to celebrate with him.

The high point of King’s career with the Magpies came in his next two games.

The first came against Richmond in Round 18. He spent most of the game biding his time on the bench, then came out and lived every kid’s dreams by kicking the match-winning goal. It was his second of the game, and it came with less than a minute left in the game to put the Magpies back in front.

The final siren sounded soon after, leaving Collingwood five points in front. Interviewed by Andrew Maher on the field, King said: “It’s what dreams are made of, really … Growing up as a kid; you always want to kick the last goal in a winning side. My heart is going; my heart is going really fast.”

Then he spoke to the waiting media in the rooms: “Brodie gave me a good handball. I’d much rather kick them on the run from there than a set shot from 40 metres.”

Malthouse said of King after the game: “We were bringing him up as a forward because he had a couple of weeks at Williamstown and kicked a couple of bags. He’s come up and kicked a very important goal today, so it’s good.”

King’s parents watched his goal on television. They had travelled across to Melbourne the week before, for the Bulldogs game, but had returned to Adelaide.

The Herald Sun said of King: “He became an instant hero in the eyes of the Magpies army when, on the run, and at the end of a succession of handballs, he booted a major from the goal square to put his side five points in front of Richmond with fewer than 20 seconds remaining.”

He kicked three more goals the following week against Fremantle at Subiaco. It was “a spritely performance” with his best goal coming in the last quarter when he snapped one over his head which halted the Dockers’ run.

He kicked another goal against Essendon the following week. His ninth – and final – game in black and white came against Port Adelaide in Round 21, where he spent only minimal time on the field.

Sadly, persistent knee injuries and a lack of opportunities meant he could not break through for another game in 2005. He was delisted at the end of the season, and later played for Box Hill.

It was a short career highlighted by two magic moments – his match-winner against the Tigers and his three majors against the Dockers – in what was a two-week streak that Magpie fans won’t forget in a hurry.