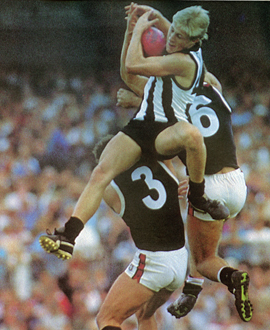 Heath Shephard's debut game against St Kilda was the highpoint of his career.

It was the sort of debut that left Collingwood fans expectant for what might come next.

Nineteen-year-old Heath Shephard, the son of 46-game Magpie Graeme and father-son selection from the 1988 National Draft, turned an otherwise routine rout against the Brisbane Bears at Victoria Park into a standout debut performance that few Collingwood players could ever hope to emulate.

It was round three, 1989, and Shephard had been elevated into the senior team after kicking nine goals in his two reserves games after some good practice match form earlier.

By game’s end, the blond forward from Burnie in Tasmania, via Mackay in Queensland and Robinvale in country Victoria, had kicked 5.5 from his 18 possessions, dragged down a couple of spectacular marks, secured a Brownlow Medal vote, and managed with his family to keep the Collingwood Social Club open well beyond its normal operating hours that night.

“I reckon they kept her (the social club) open until we went to sleep,” Shephard would recall to the Herald Sun years later.

It was Boys’ Own Annual stuff. A long career in Black and White seemed if not assured, then the most likely option.

But almost within the blink of an eye – at least in football terms – Shephard’s AFL career was over. Like a comet that flashed brightly but all-too-briefly, he played a further 10 games for the Magpies – for eight more goals across two seasons – before re-emerging as a Brisbane player for four more games and one more goal in 1992.

By his own admission, Shephard was unable to turn his undoubted natural talent and freakish skill set into the consistency of performance that league football demands.

“I suppose you could say I was a bit of a party boy back then,” he admitted. “Looking back, I reckon I set a target to play in the VFL because Dad did, and once I achieved that, I was happy.”

“After the first game and the next week against St Kilda (where he kicked two goals), I started to think it was nice and easy. Then we played a few good sides like Essendon and Hawthorn which brought me back to earth.”

However brief his time was in black and white, Shephard’s first match sits forever in the minds of those who were there, especially for his first quarter of football. In the space of half an hour, as the Sun News-Pictorial documented, he “took two memorable marks, kicked two goals, two behinds, put two shots out on the full, and had the crowd murmuring expectantly every time the ball went into the Collingwood forward line.”

Coach Leigh Matthews said after Shephard’s debut: “He’s got a bit of goal kicking flair and doesn’t seem to decide until the last minute which foot he’s going to use even from set shots.”

“He’s a real forward, picks up the flight (of the ball) well and he’s an opportunist.”

Shephard’s father, Graeme, who had played in 1970, and again in 1974-75, flew over from Tasmania for the occasion in 1989, explaining that his own father had down the same – albeit landing at Essendon Airport – when he had made his debut for the Magpies. Graeme had also debuted in round three at Victoria Park, and although he didn’t captivate the crowd like his son would a generation later, he still kicked a goal and had 17 touches.

One of Heath’s big grabs – he could drag down an impressive mark for a player standing only 179cm – made it into the sports sections of the newspapers of the time, though nothing could quite beat the live action of his snap on his opposite foot from a near-impossible angle in front of the Collingwood Social Club.

“The snap from the boundary was something else,” Shephard said. “I knew I could do it because I can kick both feet. Even though I am a natural right-footer, I’d back myself more on my left when I’m kicking for goal.”

Matthews tried to keep Shephard’s performance in perspective, though he was feted from the moment he left the field. Fan mail flooded into Victoria Park for him from early the next week.

“You can’t afford to keep dwelling on those moments,” he said at the time. “Afterwards everyone comes up to you and congratulates you and calms you down. They (the club) let me have the glory for a few days and float on cloud nine after my first game and then they dragged me back to where I belong.”

But football can be a great leveller, as Shephard found out within weeks. He kicked two goals in his second game, then a single goal in his third. In his fourth, his housemate at Coventry House, Colin Alexander, shone as a small forward in the round six game against Melbourne, kicking four goals as his teammate was banished to the bench without a goal.

Shephard kicked three goals against Carlton in round eight, and three more against West Coast in the last game of the home-and-away season, but tellingly he was overlooked for the finals.

Only two more games followed for him in 1990, but inconsistent form and a mid-season broken arm meant he was never in consideration for the side that would go on to end Collingwood’s 32-year flag drought.

He was delisted by the club in the afterglow of the premiership success, on the same day that Wes Fellowes departed, but insisted the Magpies had been fair to him – “I’m not upset, I’m not unhappy with Collingwood.”

After a year with Burnie Hawks in Tasmania, Shephard was granted one last AFL chance with Brisbane – the team he had cut apart in his first game in Collingwood colours. But he was only afforded four games for the Bears in 1992, his league career ending in frustration at the lack of opportunities granted to him with the struggling club.

Matthews said Shephard’s highlights reel, however brief, had few “mundane moments”. One-time teammate Brian Taylor said he was “very flamboyant with great skills, and should have played a lot of football. But like a lot of young players who start off well, I think Heath thought it was all going to happen for him.”

His AFL career was over. But Shephard played on in lower leagues, including with West Preston in the Diamond Valley Football League, providing plenty more highlights for the crowds at grass-roots level, as he did for such a fleeting time at Collingwood.