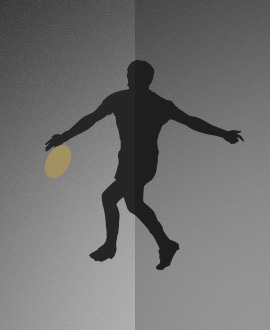 There aren’t many pairs of brothers who have found themselves on opposite sides of the Collingwood-Carlton divide.

But that’s what happened with Bill and Charlie Hammond – and a third brother, Jack.

All were born and grew up in Collingwood. Charlie found his way to Carlton first, in 1905, and was joined there the next year by older brother Jack. Jack only managed two games before crossing to Melbourne for a futher two, but Charlie turned out to be a champion – a rough, tough defender-turned ruckman who ended up playing in no fewer than five premierships.

Somehow, though, the pair’s younger brother, Bill, ended up at Victoria Park. And by the time he started with Collingwood Districts in 1909, observers were already comparing him with his famous Carlton brother. Tall and strongly built, Bill was “reputed to be a fine ruckman”, said one newspaper while he was still playing with the Districts.

He was finally selected for the Collingwood seniors in 1911, against South Melbourne in Round 5. He started in defence but was moved forward after he got injured as the Pies lost by a point. The next week he was injured again, this time so seriously that he was confined to bed for a week and missed the next two games.

He returned for two further games later in the season, and managed his first and only goal in the return game against the Swans. Then he capped off his debut season by winning an umbrella as a prize from the club for regular attendance at training throughout the season.

Four games wasn’t a lot to go on, but Bill – or ‘Chock’, as he was known – showed undoubted promise. During the 1912 pre-season, he was bracketed alongside former Districts teammate ‘Doc’ Seddon as a pair of big, strong followers from whom big things were expected in the year ahead.

Seddon, of course, went on to great things. But Bill never played senior football for the Magpies in 1912, or again. And it’s not clear where he played at all. His football after 1911 remains a mystery.

What is known, however, is that before too much longer, he was dead – a victim of the Spanish Flu pandemic that hit Australia in 1918-19, and which would prove to be the most deadly natural disaster in human history. Bill passed away in February of 1919, aged just 31, in the Exhibition Hospital, a dedicated influenza facility that had been set up at the Exhibition Building to handle the growing number of cases. His death came just four days before brother Charlie received his Life Membership certificate from Carlton. One of the tributes to Bill in the newspapers came from then Collingwood youngster Bill Twomey Snr. It read: “A message of respect and esteem in the memory of my dear pal William (Chock), who passed away Feb 16. One of the best. Deeply regretted.”

The best of the Hammond clan was undoubtedly Charlie – of that there can be no doubt. But his younger Bill obviously had plenty of promise. Why that promise was never realized may be something we never know.