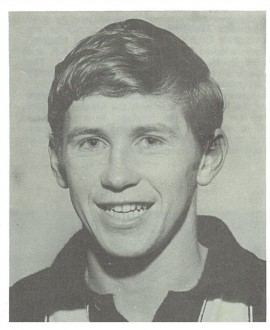 Gary Wallis was always destined to play with Collingwood – but boy the club made him wait for that moment.

The son of former player Tom Wallis, a solid defender in the 1940s, Gary first appeared at Victoria Park with the under-19s in 1962 as a slight, skinny rover. In the end it took him until his fifthseason before he finally cracked it for his first senior game, and by the time his Magpie journey ended just two years later he had racked up some 79 games in the lower grades.

Wallis came to the club from Lalor’s under-age teams at the age of 15, and his pathway to the under-19s was smoothed a little by the fact that Tom was coaching them at the time! Gary played eight games with the thirds in 1962, returning to the Lalor under-16s in time to help them to a flag. In 1963 he played all 18 games with the reserves, kicking 23 goals and establishing himself as a smart, tenacious rover with a keen eye for goal.

At this stage it looked like a straight linear progression was underway – thirds, seconds, seniors. But instead Gary spent the next two seasons yo-yoing between the reserves and under-19s. In 1965 he even captained the under-19s to a Premiership – an honour, no doubt, but not where his career trajectory had seemed to be taking him.

Early in 1966, it looked like happening again. The boyish-faced Wallis turned up for senior training but coach Bob Rose told him to go back and train with the under-19s again. When it was pointed out that Gary was no longer eligible to play with the thirds, Bob told him to instead turn up to the senior practice match that weekend. Gary did, played well, kept his place, was named on the senior list and got his senior debut four weeks into the season against Richmond. Quite the turnaround.

Another young rover, Wayne Richardson, debuted on the same day, winning rave reviews for amassing more than 30 possessions in his first game. And while Gary didn’t have quite the same impact, he kicked a goal and generally showed plenty of promise.

That promise only built in the weeks that followed. He kept his place for the rest of the year and managed 27 goals – the fourth highest total at the club. Along the way he kicked a bag of four against eventual Premiers St Kilda, and four other bags of three.

Wallis was always slightly built but had excellent skills on both sides of his body, and had a real knack for finding the goals. He was a great reader of the game, and seemed adept at knowing where the ball was going to go before his opponents did. He wasn’t super quick, but quick enough to use that advantage to get the break he needed.

The Herald described him as a “competent and clever second rover and forward pocket with good goal sense”. “Not short of pace but doesn’t try any fancy runs with the ball. Prefers to get his kick and can get his boot on the ball very quickly under pressure.”

After such a promising debut season, Gary’s career unexpectedly tailed off in 1967 – not helped by a pre-season bout of glandular fever. He managed 11 games but only five goals, with another handful in the reserves. He played five more games in 1968, but after eight rounds and with virtually no warning he was surprisingly cut from the list – still aged just 22.

St Kilda picked him up mid-season and he played three further games there before spending two years with West Adelaide in the SANFL (where he won a best and fairest), followed by time with Brunswick and Diamond Creek. His brother Glen followed him to Collingwood under-19s in 1969.

In the end, Gary Wallis finished his VFL/AFL career with 36 games and 38 goals. Given the Pies had spent so long developing him, it seems a little odd that he was let go at just 22 years of age. A second rover who can kick 27 goals in a near-Premiership season as a 20-year-old just might have been worth persevering with.