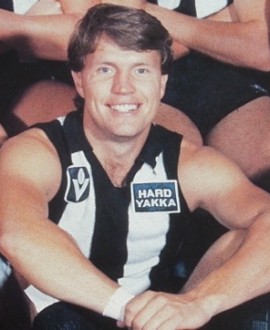 A clever centreman-utility, Allan, affectionately known as ‘Gubby’, showed great skill with both his VFL clubs after starting his football career with VFA club Sunshine.

He reached football infamy for kicking across goal late in a match against Footscray at the Western Oval, only to pinpoint Bulldogs forward Simon Beasley who duly slotted the match winner.

Commentator Tim Lane, on the ABC, had said: “Graeme Allan is hanging his head, but he did what I think his coach would expect…It was a super effort by Beasley. He could write a new chapter in the Boys’ Own Annual.”

Beasley did not miss and put the Bulldogs in front by five points, with Collingwood’s 13.17 (95) to the opposition’s 15.10 (100) leaving them short when the siren rang soon after his kick.

Allan represented Victoria and, at the end of his playing career, started an administrative career with Collingwood, playing a vital role in the 1990 premiership triumph (and the quarter time brawl in the Grand Final against Essendon).

He subsequently took the reins at Brisbane where he oversaw the 2001-2003 premierships, two of which were against Collingwood.

His son, Marcus, later played for the Lions.