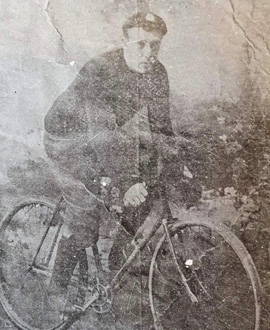 Next time you worry about how our players cope with travelling interstate to play footy, spare a thought for Jack Denning, who holds a unique place in our history – as the only Magpie ever to cycle from Fremantle to Brisbane, via Adelaide and Sydney.

This extraordinary achievement took place in the middle of 1898 and still stands as one of the most remarkable individual feats ever accomplished by one of our players outside the football field.

Denning was born in Melbourne but moved to Perth with his work (he was a tinsmith by trade). He arrived in WA with a growing reputation as a cyclist, and did some track racing as a member of the West Australian Cycling Club.

But transcontinental racing (also known as overland racing), in which competitors would ride from one side of the country to the other, was becoming a bit of a ‘thing’ in the mid-to-late 1890s, and Denning was drawn to it. Early in 1898 he arranged with the Austral Cycle Agency to make an attempt on the Australian record.

But his early attempts failed disastrously. He initially set off in March but made it only as far as Coolgardie before being recalled by his company for work reasons. He set off again in April but his chain smashed near Fraser’s Range, about 900km from Perth, and he had to walk two days to get back to Norseman, most of it without food and water. His ‘disappearance’ was reported in all the newspapers, and there were fears for his safety as trackers and police searched for him.

You might think such an experience would have deterred him from trying again, but Jack Denning was clearly made of sterner stuff than that. He set off again less than a month later – and this time there was no stopping him.

This wasn’t just a leisurely ride across the country either (if there even is such a thing) but also a race. He was trying to break the existing record, but also trying to beat his nemesis H A White, who was being sponsored by a rival cycling firm and had left Fremantle a day before. The two would go hammer and tongs at each other as they crossed the country over nearly two months.

Riding a ‘Swift’ road racer, Denning struggled through the heat and sand of the desert, sleeping outside and often having to carry his bike and luggage when the sand was too deep and soft to allow riding. He suffered extreme fatigue but set a cracking pace, overhauling White at Penong (a small town on the Nullarbor) and setting a record for the time to Adelaide.

The two rode together for long periods between Adelaide and Melbourne, but both suffered accidents that delayed their progress. Denning still hit Melbourne first, at which point White despaired and nearly gave up, being nearly a day behind. He would have been glad he carried on though, because after days of riding through torrential rain Denning had a nasty smash as he neared Sydney that badly damaged his bike and left him lying unconscious in a ditch. He was forced to seek repairs both personal and mechanical over four days, and the time lost allowed White to comfortably overtake him before Brisbane.

Jack Denning ended up completing the trip in 58 days, two inside the old record. Had it not been for the days lost to accidents it would have been closer to 50, and he would almost certainly have defeated White. He caught a steamer back to Perth while White, incredibly, chose to cycle home again! (albeit at a far more leisurely pace than the outward journey).

But that wasn’t the end of Jack Denning’s story. He moved back to Melbourne, and in March of 1899 fractured his arm in yet another cycling accident. But a few months later he ran out with the Magpies to make his footballing debut against St Kilda, billed as ‘the overland cyclist’.

He was obviously fit and strong, weighing in around 74kg, and played mainly as a forward or on the ball. The Age said afterwards that his first-up performance “proves that he knows the game”. “With a little practice he will make his mark. More is likely to be heard of him.” He played again the following week against South Melbourne, kicking the only goal of his career early in the game, and newspapers again noted a solid display that was even better than his first.

But he was still demoted to the Juniors the next week, and never played for the Pies again. Midway through 1900 he was cleared to Brunswick, but cycling remained his first love and he continued to compete in many competitions. Unfortunately he required major surgery in 1902 to fix a severe case of varicose veins (common among cyclists in those days) and that seems to have curtailed his sporting activities. He ended up living in Thornbury, and died there in 1949, aged 73. His nephew, Clen, played more than 170 games with Carlton and Fitzroy in the 1930s & 40s, making football history along the way by kicking six goals with his first six kicks in League football.

Jack Denning’s football CV is brief, and unremarkable. But his time as one of Australia’s great overland cyclists marks him as one of the more extraordinary athletes ever to have represented the Collingwood Football Club.