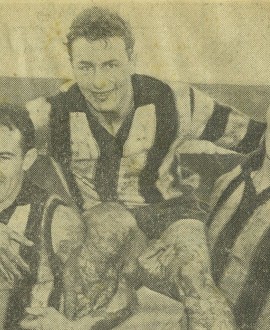 A tough, nuggetty and skilled rover from Preston who narrowly missed out on a spot in the 1958 grand final side but ended up making an even greater contribution to Collingwood as a long-serving coach of the club’s under-19 team from 1978.

Keith Burns was a local Preston lad who initially wanted nothing more than to play with Preston Wanderers. After some good form there he was invited to play with Collingwood under-19s early in 1957.

But after just a handful of games he found himself elevated – not to the reserves but straight to the seniors! He barely knew any of the players, let alone senior coach Phonse Kyne, but still managed to make a reasonable fist of his first outing, kicking a goal after lining up alongside future Collingwood coach Tom Hafey, then playing in a back pocket for Richmond.

Burns managed only four senior games in 1957, one in 1958 and four again in 1959, as a combination of injuries and competition consigned him to long periods out of the first 18. Even so, he was unlucky not to play in the 1958 premiership, as the one game he played for the year came in the final round, when he kicked two goals. Had it not been for a concussion suffered in that game, he might well have kept his place for the finals (instead it went to his good mate Kenny Bennett).

In 1960, however, Burns finally found form, opportunity and consistency. He kicked a career-high five goals against Carlton in his first game for the year in Round 8, and kept his spot for the rest of the year.

“He is a nuggetty ball of energy who will go fearlessly into packs for the ball,” wrote The Sunnewspaper. “Has had to battle for his place in the side but tenacity earns him his kicks. Could do with more pace but turns smartly. Dumpy build and strong legs help him to absorb bumps well.”

Burns kicked 25 goals for the year (equal second highest among Magpie players), but none were more important than the late snap against Fitzroy in the preliminary final that saw the Pies into the grand final. He was named in the best players that day for his three goals, just as he had been in the first semi-final when he kicked a wasteful 2.4.

That was the high point of his Collingwood playing career. Just over a year later he was the victim of an end-of-season purge by the selectors. He went to Sandringham in the VFA, got fitter and won the Liston Trophy in his first year.

But rather than contemplate a return to the VFL, Burns instead threw himself into coaching, taking over the reins at Sandringham at just 23 years of age. In the late 1970s he was coaxed back to Collingwood as coach of the under-19s side, a role he filled until the under-19s competition was abandoned in 1991.

He also led the under-19s to one of only four flags in the team’s history, with a 1986 victory over North Melbourne. More importantly, however, a unusually large number of players from that team would go on to play senior football with the Pies and four – Brown, Monkorst, Crosisca and McGuane – would play key roles in the drought-breaking 1990 senior premiership.

After the under-19s competition ended, Burns continued coaching with the Northern Knights in the TAC Cup under-18 competition, where he enjoyed further success. In 2015, having coached more than 750 games in all competitions and developed more than 100 boys who played senior football, Burns was awarded the AFL’s Jack Titus Award for services to football.

He continued to remain involved with his beloved Pies, too, having a long involvement with the Past Players Association and acting as their president for an extended period.

As both player and coach, Keith Burns has been one of the great servants of the Collingwood Football Club, and of football in general.