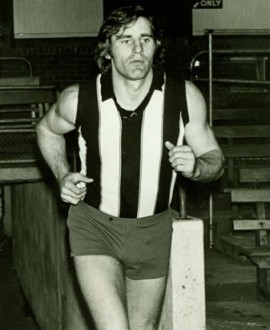 Ex-Myrtleford. “Slamming Sam” was a footballing powerhouse whose name is usually equated to a great talent wasted. Still he managed to play in North Melbourne’s first flag side in 1975 and represent Victoria despite a litany of dramas that included throwing his boots into the Yarra during a training session under North Melbourne coach Brian Dixon, being photographed at the races when he should have been training at Arden Street, and appearing in a nude centre spread in “Truth”.

He was born in Manjimup, WA, to Yugoslav parents who had emigrated to Australia after the war.

He won North Melbourne’s best and fairest in 1969, but in the years ahead the relationship was fiery.

Kekovich was deeply affected by the death of his 17 year-old brother Michael in 1971 and he admitted that afterwards he pushed the party button for 25 years.

His flirtation with other codes involved offers to play gridiron in the US and rugby league in Sydney, and there were constant approaches from other League clubs.

In the end North Melbourne’s patience ran out and he was cleared to Collingwood where his League career fizzled to a quiet end.