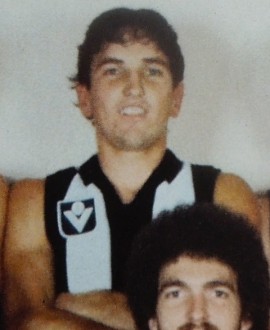 As the son of a former Collingwood Premiership player, Tony Beers’ arrival at Victoria Park might have been expected to attract plenty of attention. Especially so when he’d captained the highly acclaimed school team Parade College, while simultaneously getting his first taste of action with the Collingwood under-19s.

But oddly, Tony Beers managed to slip largely under the radar in his years with the Magpies.

The son of ’58 hero Brian Beers got his first taste with the under-19s in 1979 when he played half a dozen games as a 16-year-old. He continued to develop in the under-19s over the next two years, also making his reserves debut in 1981.

But it was 1982 that seemed likely to be Tony Beers’ breakout year. He managed 17 games and 12 goals in the reserves, eventually finishing runner-up in that team’s best and fairest.

More importantly, he finally managed his senior debut, named at full-forward against Essendon in Round 7, wearing the number 50 guernsey. He had only five touches that day and went back to the reserves until the Round 18 game against Sydney.

Still, it was a start, and the club was content with his progress. He was well built, at just over 6 foot tall and 13 stone, and a good enough mark to hold down key positions or play as a tall flanker. He had plenty of pace too, and loved playing in the centre or on a wing, or perhaps as a ruck-rover.

Tony played more good footy in the reserves in 1983 (wearing 39), but had to wait until Round 18 for his next senior chance. He then played three games in four weeks, including a career-high 17 disposals and a goal in a 10-goal win over Sydney at Victoria Park in Round 20.

But after one more reserves game early in 1984 his Collingwood career came to an abrupt halt and he headed west to join Claremont in the WAFL. Younger brother Mark Beers was already at Victoria Park by the time he left, and carried on the family name with 40 senior games.

Tony had a huge impact with Claremont, playing 107 games and kicking 89 goals across seven seasons, as well as captaining the club.

Despite his prowess as a goalkicker – he’d kicked a few ‘bags’ while at Collingwood, including one of seven in the under-19s and one of five in the reserves – he eventually found his niche at centre half-back with Claremont, and he filled that position in their premierships of 1987 and 1989. He also represented WA against the VFA at Subiaco in 1988. He later played with and coached the North Fremantle Amateurs.

His former clubmates were shocked and saddened when Tony Beers passed away early in 2018, aged just 55.