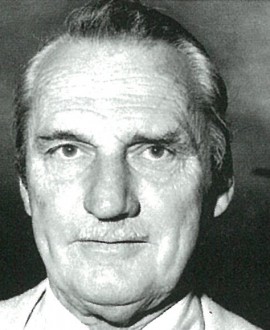 The appointment and sacking of Tom Hafey were almost the bookends to John Hickey’s time as Collingwood president. In between those momentous decisions sat four agonising Grand Final losses and a dramatic draw.

It was a cruel return for a man who gave so much of his time to the club – and the sport – that he adopted well into his action-packed life. Hickey deserved a better reward, even if the Collingwood faithful voted him out of power at the end of the 1982 season, in the desperate chase for that elusive premiership.John Hickey hadn’t always been a Collingwood fan. In fact he was born in Toowoomba, in Queensland, and spent much of his early years devoted to rugby and cricket.

But it was aviation that became one of his greatest passions, and he gained his commercial pilot’s licence before enlisting in the RAAF at the start of the Second World War.

While Collingwood has a rich tradition of its players serving their country in times of war, few people realise that one of its presidents – Hickey – would serve with distinction long before he came to be at Victoria Park.

Hickey was a member of the 22 Squadron and would be awarded with the Distinguished Flying Cross for his courage in an enemy raid during the conflict. By the end of the war, he would be a Wing Commander.

He would devote much of his working life to the aviation industry, predominantly working with TAA.

In moving to Melbourne to further his career, Hickey instantly knew he had to choose a football team, and fortuitously, that team would be Collingwood.

He started out helping on the reserves committee, and then served on the senior’s committee before being elevated as one of the club’s vice-presidents.

When Ern Clarke resigned from the Collingwood presidency in May of what was a tumultuous 1976 season, Hickey was elevated to the role and was charged with trying to unite what had been a fractured club.

The Magpies “won” their first wooden spoon in 1976, but Hickey was all about building for the future, and that included chasing the best available coach in the pursuit of that long-awaited flag.

A chance encounter with four-time premiership coach Tom Hafey later in the year sowed the seeds of what would be a masterful coaching appointment. Hickey had Hafey installed as the new Collingwood coach – the first time an outsider had been selected – and he would take the Magpies from last to a Grand Final appearance in his first season.

The appointment almost delivered the ultimate prize. The Magpies led by 27 points at three-quarter-time of the 1977 Grand Final before North Melbourne responded. The game ended in a draw, but the Kangaroos would win the replay by 27 points the following week.

Further Grand Final losses would come in 1979 (five points), 1980 (81 points) and 1981 (20 points) as Hafey took what were considered modest teams almost to the point of being a premiership side.

There was constant debate about whether Collingwood was doing enough from a recruiting point of view to deliver the players Hafey needed to take his team to the ultimate prize. And as the club continued to come so close to success, and yet not close enough, there was criticism that Hickey and this board were too conservative in actively pursuing stars from rival clubs and not aggressive enough in unleashing the purse strings to allow it to happen.

The 1981 Grand Final loss was a turning point. The relationship between Hafey and many of his players – which had been so tight in those early years – became frayed and it resulted in a miserable start to the 1982 season.

After eight consecutive losses – and nine defeats from the first 10 games – Hickey and the board felt they had no alternative but to sack Hafey, believing the players did not want to play for the coach any longer.

The move to sack Hafey, and failure to achieve the ultimate success when it had been so close, brought the inevitable challenge to Hickey. The seeds of a new revolution were grown as the Magpies’ miserable season rolled on.

There was a groundswell for change, and media proprietor Ranald Macdonald was the headline name on a seven-man ticket which called itself the ‘New Magpies’. They promised to modernise the club, to embark on a recruiting blitz previously unheard of in football, and to put the club into a position where it was capable of winning premiership on a regular basis.

Hickey had no chance against that sort of rhetoric. As much as he had worked passionately for the club, as close as he had come to tasting the ultimate success, and despite a 55-per-cent win-loss ratio in his presidency, he was swept out of power by the biggest landslide the club had seen. It wasn’t the sort of exit he wanted, or deserved, but he remained a passionate supporter until he passed away, aged 88, in 2009.