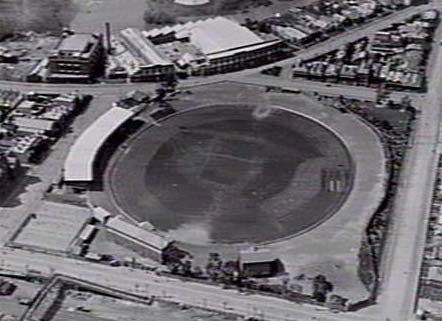 An aerial shot of Victoria Park from 1929.

The Magpies were justifiably proud of their beautiful 1909 grandstand. But in terms of club pride, nothing comes close to the way the club came to feel about the stand that would be added to Victoria Park’s northern wing 20 years later, the Ryder Stand.

It wasn’t as aesthetically pleasing as the detailed, ornate 1909 structure. But it was born in the Depression, was built by the local unemployed and came to symbolise all that is good about the bond between club and suburb, and the club’s commitment to the community. It’s a commitment that continues to this day.

There had been no major developments at Victoria Park since the 1909 stand had been added. The ground had seen many great moments, including the opening round in 1911 when the players climbed into the new stand to unfurl the 1910 Premiership pennant. During the First World War, the ground played host to a number of fund-raising events and patriotic carnivals that generated important funds for the war effort.

But by the late 1920s, it was again becoming clear that Collingwood was almost too popular for its home ground. This was, of course, the time when the suburb and the world began to slide into the whirlpool of the Great Depression. One historian noted: ‘It seems to have come early for the industrialised suburbs, hit them hardest and left them last.’ In 1927, while the world’s economic collapse was still two years away, the citizens of Collingwood began to endure tough times. This happened just as the football club was beginning to awake from a slumber that had seen it go seven years without a flag. To Collingwood in those days, that felt like a drought.

That mini-drought ended spectacularly, of course, with the club winning a still-record four successive flags between 1927 and 1930. The fact that this success came amidst the backdrop of the growing Depression made it even more enjoyable. Most of the 38,000 Collingwood residents followed the club’s fortunes with an abiding passion. The ordinary supporters in the community – those who scrimped and saved to attend the football each week and even those who could not afford the admission fees – lived vicariously through the achievements of the club.

Ironically, the onset of the Depression was one of the main reasons behind the Council’s decision to push for a new grandstand at Victoria Park in the late 1920s. The Government Unemployed Relief Fund, set aside to promote capital works conducted by the growing ranks of the unemployed, was the catalyst for this move. The Council decided to use £1200 from the Relief Fund and borrow £8000 at almost 6 per cent over 15 years to begin construction of a new stand on the site of the old pavilion known as the ‘Cowsheds’. Local unemployed people were used to help build the new grandstand, meaning just about everyone who later sat in it knew someone who had helped build it.

Work began in late 1928 with the aim of having it finished for Collingwood’s first match of 1929. It seemed an ambitious deadline, but both the suburb and the club were justifiably proud when the new grandstand was finished well before the completion date – and under budget.

There was a big blue between the football and cricket clubs over rights to the new stand. In the end, the grandstand was dissected by wire fencing from top to bottom with one-third of the stand being allocated to the 300-member cricket club, while the football club had two-thirds for its 3100 members. The football club was outraged by that inequality, and became even more annoyed when a cricket club proposal to name the new structure the Jack Ryder Stand – after the district’s leading cricketer – was agreed to by the Collingwood Council.

The new stand was opened at the first game of what turned out to be the most successful home and away season in VFL history (the Magpies won every one of their home and away games in 1929, a record that has never been equalled). And the club continued to support the struggling community during the lean, hungry years of the Depression, offering hope, help and inspiration to the unemployed and their families. The district had 31.2 per cent of its male population out of work, the second worst of all the city suburbs.

The club held a large carnival at Victoria Park where goal-kicking competitions and foot races between the players were put on for the crowd’s amusement. The club also became one of the first VFL clubs to allow sustenance workers (or ‘sussos’) into Victoria Park matches for free. They had to be at the ground in the ground 15 minutes before the 3 o’clock kick-off to qualify. There was no shortage of takers.

Victoria Park was the centre of the universe for many Collingwood residents in those dark times. The team’s success was the one thing many had going for them. And Vic Park – and especially the Ryder Stand – came to be a symbol of community spirit, and resilience.