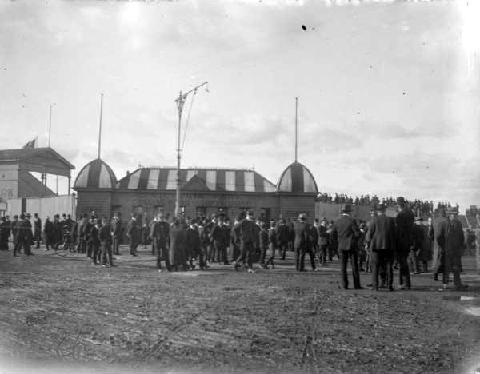 After the land on which Victoria Park now sits was acquired by the Collingwood Council in 1878 came the dilemma: what to do with it?

Almost on cue, local sporting identity and politician George Langridge lodged a proposal, suggesting the reserve be used as a sports facility, primarily as a cricket ground for the district’s teams. Langridge, president of the Yarra Yarra Cricket Club, was desperate to find a new home for his team, and several other clubs in Collingwood needed a home base, too. He argued the district’s sporting stars were frustrated by a lack of facilities, forcing them to play elsewhere. Their talents, he feared, were being lost to the Collingwood community.

Langridge’s proposal divided both the Council and the community as a whole. Some argued passionately that the suburb needed to foster its sportsmen, as its suburban neighbours did for the sake of social development, while others used as much venom to declare that the reserve should be for the entire community. They argued sporting teams at the Park would disenfranchise Collingwood citizens.

Even two of the local newspapers were at odds. The Collingwood-Fitzroy Mercury confidently predicted Langridge’s proposal would fail. It argued: ‘Now we do admire the game of cricket as much as anyone, and we do regard it as a fine, healthy and bracing exercise, but for the life of us we cannot see the expediency or wisdom of allowing a sports club to utilize the park.’ The newspaper predicted: ‘We are fully satisfied that the ratepayers will never endorse – and if we are not mistaken the councillors of Collingwood will not make – such a disposition of the land in question as the deputation has had the effrontery to ask.’

The Collingwood Observer’s view was the complete opposite. Targeting the community pride of its readers, the newspaper said: ‘Of all the principal Melbourne suburbs, Collingwood (although the pioneer of municipal independence) is really the greatest laggard in the role of social progress and it is with this view of making a step forward that a few gentlemen have urged us that the conversion, by private effort, of the Victoria Park into an attractive place of public resort.’

The Observer said the reserve would undergo little development if left solely in the hands of the Council. It argued: ‘As long as there is a gutter to channel, or a path to asphalt, certain municipal minds will not hear of work savouring the ornamental; therefore the two (other) recreation reserves (in the area) – the Mayor’s Park and Darling Gardens – have been declared solely for the recreation of cows, and local athletes are forced to seek playgrounds out of the district or use any rough piece of unoccupied land they can find.’ Victoria Park, it argued, was likely to suffer a similar fate. ‘To obviate this, and to provide a rallying point for pleasure, it is proposed to hand over the park to a club, the membership of which will be open to the residents of Collingwood.’

It was pointed out that the club’s subscriptions would ‘increase and ornament the ground and, in time, the Victoria Park will become a great attraction to Collingwood, the people of which will thus be able to enjoy themselves within their own boundaries’. In answer to critics of the Langridge proposal, the Observer said: ‘Well, if said people wish to retain their rights and decline to have a beautiful park created for them, without expending the ratepayers’ money, they are welcome to roam unchecked for years to come over a piece of paddock.’

After great debate the latter argument prevailed. The Council called a public meeting at St Phillips Hall in Hoddle St to ‘consider the proposal to hand over the caretaking of the Victoria Park to a senior or leading Collingwood cricket club’. The overwhelming response to the meeting in December 1878 and the swelling of community feeling forced the Council’s hand. By the middle of 1879 they had set a part of the recreation reserve aside for cricket. And Victoria Park was born.