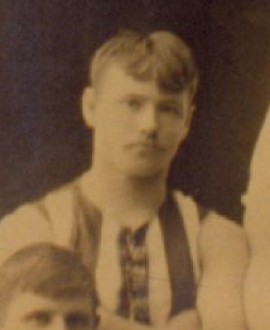 The heroic comeback from injury is one of the oft-repeated storylines that would be familiar to any footy fan. George Callesen offered one of the earliest examples of a Collingwood player having to make that journey, and unfortunately he had to do it twice. Even worse, the second one ended disastrously.

George holds a place in football history as the first Preston player who can be clearly identified as having moved on to play senior football. He played at least 30 games with Preston, winning a name for himself as a wingman who could kick a goal.

George was born in Chewton in 1874, his Danish father having arrived in Australia 12 years earlier (the surname Callesen has often appeared as ‘Calleson’ throughout the family history, most often in newspapers but sometimes even in official records). After playing with Preston, George joined Collingwood in 1896 and made his debut in the very first round, named as part of the midfield group known collectively as ‘the ruck’. He was named among our best players in just his second game and immediately became a regular, playing 17 games and kicking two goals in that debut season. Sturdy, quick and with a good eye for goal he played mostly as either a winger or midfielder, but also spent plenty of time forward. In one game he even played on the ball when the Magpies had the wind, and in defence where they were kicking into it! He lined up in a forward pocket in the Grand Final against South Melbourne, and was widely regarded as having played an outstanding game.

He was similarly consistent in our first season in the VFL, 1897, adding a further 15 games and five goals and regularly being named in the best players. He played one of his finest games against Geelong early in the season, kicking two goals, being best on ground and standing up late when the pressure was at its fiercest. “Whether forward or following Calleson was equally prominent,” noted The Sportsman. “He played splendidly throughout a very gruelling game.”

“Calleson showed very fine football all over the field,” noted The Argus after another game that year. “Calleson was showing rare play— sound and smart with good, long, telling kicks,” observed The Sportsman. Nevertheless, he still had his critics, as one opposition fan yelled at him while he was shooting for goal, “He can’t kick over a cherry-nut.”

But George was about to face bigger problems. He wrenched his knee in the opening quarter of a game against Melbourne late in the 1897 season. He missed the next two weeks, returned in the finals and played a rattling game, kicking two goals.

He started the opening game of the 1898 season against Geelong on fire, having been best on ground in the early phases of the game. But he wrenched his knee again in the second term, then again when he tried to kick the ball in the second half. He missed the next 11 games, and his return five weeks before the end of the season was eagerly anticipated.

“The familiar form of George Calleson was hailed with pleasure as he stepped into the arena, after an enforced absence of some time,” noted The Mercury. “George was much needed in the finals, and great things were expected of him, but before the bell rung for the start he was led off the field, his leg having given away again, rendering him hors de combat for the rest of the season.”

Yes, in the most disastrous of results, his gammy knee had given way yet again while having a gentle kick around with his teammates on the ground before the start of the game. “This was a grave misfortune,” wrote The Australasian, “not alone for Calleson but for his club, who reckoned upon having his fine services in the important games that still remain to be played before the premiership is decided.”

That proved to be the end of George Callesen’s VFL career, aged just 24. A brick maker by trade, he stayed on Collingwood’s list and was officially cleared to Northcote in May of 1901. He played both there and with Rose of Northcote after that. He and his wife Elizabeth made headlines in 1912 when they sued their neighbour after she was bitten by his pet monkey!

One of George’s brothers, Johannes, played with Coburg and Brunswick. One of George’s sons, George Jnr, played for Williamstown in the mid-1920s and later became a boundary umpire, while another son played for Oakleigh. The football lineage continued to produce results decades later, when George Snr’s great grandson, Michael Browne, played with the Pies in the 1970s.

George Callesen played only 34 games (for seven goals) with Collingwood. If not for the succession of knee injuries that cruelly derailed his career, he would surely have played many more.