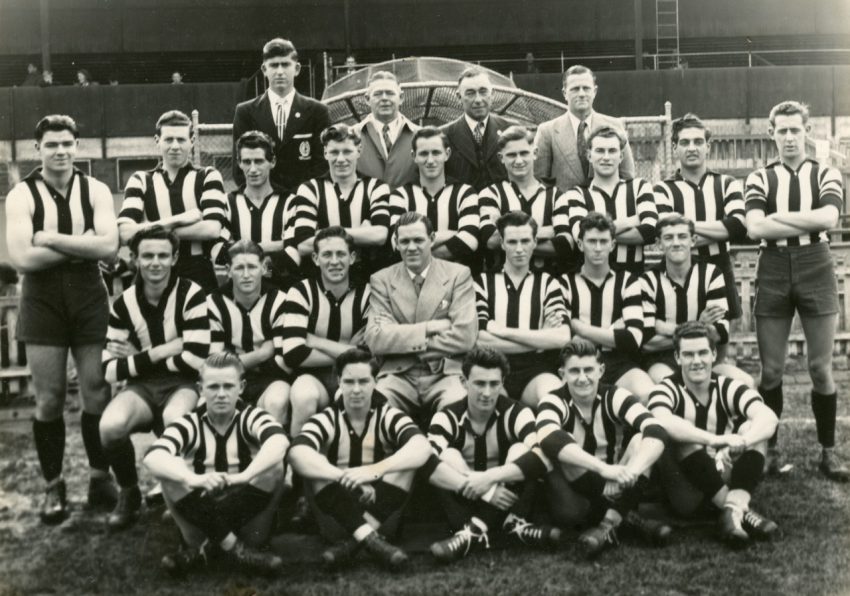 Our under-19s in their very first year of operation, 1951, with coach Jack Pimm in the middle. Pic courtesy former player George Beasley (second back row, fourth from right)

The Collingwood Football Club launched its own under-19 team to act as the club’s thirds team in 1951.

The VFL had started an official ‘Thirds’ competition in 1946, although only seven clubs initially took part. Collingwood was one of those that resisted, partly due to cost and partly to the club’s commitment to its own Schoolboy competition. That competition had started in 1934, providing teams from local schools with the opportunity to strut their stuff on Victoria Park before Collingwood home games.

The games were highly popular and also produced some extremely good footballers, including Des Fothergill, Bill Twomey and Len Fitzgerald.

The club’s decision to field its own under-19 team in 1951 spelled the beginning of the end for the schoolboy competition, which folded a few years later.

The first coach of the Collingwood Thirds was former player and Second World War hero Jack Pimm. Another former player, Eric Cock, acted as team manager. The team’s purpose was to provide recruits for the senior team, and a number of the first intake went on to play senior VFL football with Collingwood, including the winner of the first best and fairest award, Les Smith, Neville Waller, Bill Jones and Laurie Rymer.

The thirds would go on to win four Premierships for the club before the AFL disbanded the entire competition in 1991, to make way for a new Under-18 competition. Many Magpie stars of that era got their start in the Under-19s, including names like Murray Weideman, Len Thompson, Peter Daicos, Denis Banks, Damian Monkhorst, Gavin Brown, Mick McGuane, Gavin Crosisca, Sav Rocca and many more.