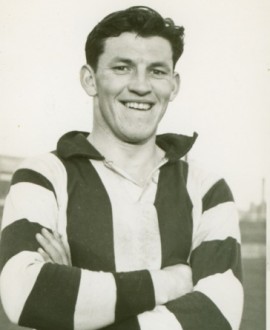 The role of ‘specialist back pocket player’ is something that has gone the way of high-cut boots and ankle bandages in today’s football. But for a long time it was considered an important, if decidedly un-sexy, position.

In the early 1950s, Collingwood had one of the best going around, in George Hams. And he was good because he was adept in all three aspects of the job.

The first is that you had to be good at working in with the full-back who stood alongside you. And Hams was fantastic at working with Jack Hamilton – they knew each other’s games and formed a great partnership. The second was that you had to be able to quell the impact of the resting rover, and George mastered that art early in his career. He was strong and close-checking and not afraid to throw his weight around to unsettle an opponent. And the third was the need to be able to attack when required, and George had that nailed too.

The last of those was perhaps the least surprising of the lot, because George was actually a midfielder/forward when he came to Victoria Park from Ivanhoe Amateurs in 1946. He began playing with the seconds and by the middle of the year had begun attracting attention as a forward/centreman. One newspaper predicted that impressive performances with the reserves would soon see both George and another newcomer called Bob Rose elevated to the seniors.

The journo was only half-right.

Rose was indeed given his chance soon afterwards, but George had to wait nearly two more years before he finally got his opportunity in the seniors. It wasn’t as if George didn’t do all that could be expected of him in the meantime: he’d finished second in the VFL reserves best and fairest in 1946, then second in the Collingwood reserves B&F in 1947.

So by the time he made his debut in Round 6 of 1948, named on a half-forward flank against Richmond, he was more than ready. He held his place after debut but was moved to the half-back flank for his second game. By his third game he was in the back pocket – and that’s where he stayed (by and large) for the rest of his career. From debut he played 57 consecutive games: he didn’t miss a senior game again until 1951.

By this time he was already regarded as one of the best back pocket players in the game. He’d finished third in Collingwood’s Copeland Trophy in 1950 (no mean feat for a humble back pocket player) and drawn plaudits from many observers.

“George Hams is the ideal type, and, in my opinion, the best player in his position in the League,” said The Argus in 1950. “His fearless dashes … gave South many headaches.” A year later the same paper wrote: “Hams is a back pocket player with pace, judgement and, above all, determination. He has settled down to being one of the best players in the League at a difficult position. He is intelligent and thoughtful, as master of a neat and well judged defence. He is one of the most consistent players of his type in the game.” Hec de Lacy in The Sporting Globe said: “Hams is of the nuggetty build and makes the most daring interceptions. His sense of anticipation is very highly developed. At 12st. and 5ft. 8in. he is the ideal build for a job he does most consistently, determination and good judgment being his chief characteristics.”

As the newspapers noted, consistency was a real strong suit for George. He was almost always in the back pocket (apart from the odd, largely unsuccessful experiment forward or in the centre), and always reliable. But injuries began to bite more frequently across 1952-53, to the point where he was only 19thman for the 1953 Grand Final. Injuries again restricted him to only nine games in 1954, several off the bench – including the rare treat of his first ever goal, when he came off the bench in his 100thgame to replace Bob Rose (he followed with a second goal before the end of the game).

By 1955 he knew the end was near when he was appointed captain of the reserves. He was still recalled for one more go in the seniors but after returning to the seconds and playing a few more games he retired from footy. He’d been interviewed for a coaching role at Camberwell earlier but had knocked them back because he didn’t feel he would have been able to get to training early enough. He had a Bachelor of Science and was an engineer with the PMG, and that is where he devoted most of his energies post-footy (he was also a fine golfer).

But even if he didn’t continue with football, George Hams had already done more than enough. A Premiership player in ’53, a runner-up in ’52 and more than 100 high quality, highly consistent games from the last line of defence. You couldn’t ask for much more than that.