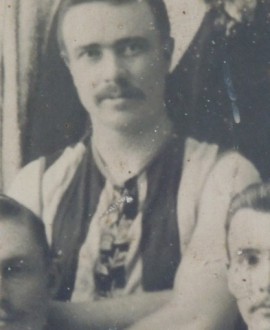 There aren’t too many footballers who make headlines for being beaten up after testifying against a teammate who had taken a bribe to throw a game.

But such was the lot of hard-working defender George Williams in the 1890s.

Williams had been a good player with Carlton in 1891 and 1892, finishing second in that club’s goalkicking in 1892. But the next year, when Blues skipper Bill Strickland crossed to Victoria Park, his young teammate Williams came with him. And while Strickland’s transfer attracted all the headlines, the Magpies would also receive outstanding service from Williams.

He played a dozen games in his first season, mainly across half-forward, where he had spent most of his Carlton career. He played 13 more in 1894, but during the season made the switch to a half-back flank – and it was that move which would cement his standing as a fine senior player.

Over the next six years, Williams came to be regarded as one of the game’s most solid and dependable defenders. He missed only one game over the next two seasons, and was on the half-back flank for the 1896 Premiership decided against South Melbourne. He was also there as the Magpies made their first appearances in the newly formed Victorian Football League in 1897.

He was an excellent defender, renowned for his shrewd play and hard work in defence. He was strongly built and not afraid of physical contests. But he could also be an attacking force, and he was an excellent long kick. The Australasian once described his rushes out of the back half as “irresistible”.

In 1895, The Mercury said he was known within the team as ‘the solid man’, because he was always hard to pass. The newspaper also noted his “quick and judicious in passing to a friend.” “Williams never failed to make the best use of the ball every time he got his hands on it,” wrote The Australasian in 1895.

“Another Carlton veteran, George Williams, continues to fight under Strickland’s banner,” wrote the same paper two years later, “and to fight withal so brilliantly that his fame as a defender can scarce be overstated. For vigour, pace, and reliability he ranked in this game next to his captain.”

Yet for all his outstanding and consistent on-field contributions, it was something that took place in the back streets of Collingwood that really brought him to public attention.

‘Squaring’ and bribery were rife in the mid-1890s, and Magpie rover Jack McInerney was strongly suspected of being involved in an incident in 1895. Williams was one who gave evidence against him, saying the rover had approached him both before and during the game with offers to join in the deal. McInerny was subsequently dismissed from Collingwood as a result.

Soon afterwards, on the same night that the club held its ‘plain and fancy dress ball’, a gang of thugs – thought to be friends of McInerny – attacked Williams at a Johnston Street hotel and ‘laid him out’. As The Mercury reported: “It is stated that Williams, a Collingwood football player who refused to play “stiff” during the season almost over, and who was a witness in a recent charge against a player in the same team, was laid out in a Johnston Street hotel … now friends of Williams are stated to be waiting their turn, for those who assaulted the ‘straight’ player.”

It’s not recorded whether the feared retribution ever took place, but Williams won himself many friends inside the football world with his highly principled stance.

And he continued to win friends through his football, too. He ended up playing 55 games in the VFL, to add to the 61 he’d played in the VFA, making him one of the earliest Collingwood players to chalk up 100 games for the club.

George Williams enjoyed a wonderful career across two clubs, and his role in our first ever flag should not be underestimated. But neither should his role in helping to establish the standards of behaviour so important in a young club’s development. In both areas he was prepared to literally put his body on the line.