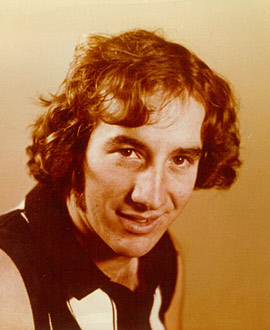 SOME footballers have an uncanny knack of simply knowing where the goals are.

Even though he played only 71 games for Collingwood across six seasons at Victoria Park, the highly-talented, neatly-balanced Graeme Anderson was one of those who always looked dangerous with the ball in his hands. A superb kick and a dynamic player when his confidence was sky high, Anderson could be almost unstoppable on occasions, like the day he dominated with eight goals against Essendon in 1977.

He had a rare talent for finding space when others couldn’t. Whether he played as a half-forward, or a ruck rover, or even as a wingman as he did early in his Magpie career, Anderson played his best when given a free hand and he could punish teams with pinpoint accuracy and a cool and composed manner. And there have been few better, or more reliable, kicks for goal on the run than the slightly built Anderson.

Anderson was born and bred less than a mile from the Port Melbourne Oval, and always enjoyed a strong residential connection to the suburb with a rich football pedigree. He lived only four doors away from Port Melbourne’s famous administrator Norm Goss Sr.

Graeme’s father, Claude, played two games for South Melbourne in 1947. His brother, Syd, represented the Swans in four games in 1976 – one against his sibling. His uncle, Syd, had been a triple premiership player for Melbourne, playing 52 games from 1939-41. His career was tragically short, with the Flying Officer being killed in action on May 20, 1944 when his plane was shot down off Wewak, in New Guinea.

Anderson played his first game for Port Melbourne as a 17-year-old, and soon became known as a player who had the capacity to find the football and find the goals. One early article said of him: “Graeme Anderson grabbed the ball in the centre of the ground, took one step and then calmly slammed it through the goals – about 65 metres away. Anderson, 20, Port’s elusive rover, is regarded as the best torpedo punt kick in the VFA.”

The Sun’sStephen Phillips described Anderson as: “an adept handler of the ball, he can take a hand pass, bounce the ball three or four times while sprinting over 40 metres and then punt kick a magnificent 65-metre goal. Anderson is the type of player who stands by himself on a wing and looks totally uninterested until he takes a pass and then bursts into action.”

Anderson won Port’s best and fairest – as a 20-year-old – in 1973, and was a member of their 1974 premiership side. He was residentially bound to South Melbourne and ended up training with them during the 1974 and 1975 preseasons, but didn’t stand out. He was also not that interested in the Swans, despite his family connections. So he just returned to Port.

In a radio interview years later, for SEN, Anderson said: “I worked at Ansett and a couple of people at Ansett came to see me one day and took me to (lawyer) Frank Galbally (who had played six games for Collingwood in 1942). I explained the situation to him and within two weeks I had a clearance via Port Melbourne and South Melbourne to Collingwood.”

It created the opportunity that his talented warranted. He wasted little time in making an impression for the club he barracked for as a kid, thanks to his mum Phyllis.

Anderson made his Collingwood debut in Round 9, 1975, having 14 disposals and kicking a goal. It was the first of 11 games in the second half of the season, and he followed it up with 20 games in a wooden spoon side the following year, as he enjoyed a more permanent presence within the team.

Anderson spent most of those first two seasons on the wing. But Hafey’s arrival as Collingwood coach in 1977 provided Anderson with a new licence, playing mostly at half-forward with spells on the ball. He also got decidedly fitter under Hafey, as most players tended to do.

Anderson didn’t play in the opening two rounds, but turned in a career-best performance in Round 3, 1977, booting 8.2 from his 26 disposals against Essendon on a day when “everything went right”. “I just had one of those days,” he would say. “Everywhere I went the ball seemed to go my way. ’Jerker’ (Jenkin) was at Essendon then and he (even) handballed to be at one stage.”

It developed a benchmark from which fans would judge him – rightly or wrongly – deep into the future, one that he couldn’t hope to live up to. The attention he gained from that breakout game – his 32nd overall – brought about a feature interview with Lou Richards, where the Sun columnist said he was “the best man on the ground by a mile, turning on a classical display of ruck rover.”

Richards questioned Anderson about his reputation as a player who preferred to inhabit the fringes of contests. The player answered honestly, saying: “I’m a bit of a receiver. I prefer to put myself in the position for the handball or a tap-out. (But) I don’t think I could ever be called a scared footballer. I suppose I am more of an opportunist than anything else.”

There were plenty of opportunities – and goals – in 1977, as he and Collingwood stormed towards the finals. He played in the club’s three finals that season – including the drawn Grand Final and the replay, kicking a goal in each while being shadowed by Ken Montgomery (he actually lined up at full-forward in the two Grand Finals).

Anderson’s nickname was ‘Arms’, which most believed came from his penchant for long sleeves. But the nickname actually started at Melbourne High School, and had nothing to do with footy. “We were mucking around in the corridors and pushing people around and waving our arms up and down,” he recounted. “A few of my mates nicknamed me ‘Arms’ and it has stuck ever since.”

After his strong 1977 season – the Football Record described him as one of the “finds of the year” – he seemed set for a great career. But he would have to wait a full season before playing another senior VFL game.

A talented cricketer who played at district level, Anderson would often miss the early Collingwood practice matches, which sometimes resulted him in starting the year in the reserves. He did that in 1978, but suffered a medial ligament strain in the first quarter of the first reserves game. He had his leg in plaster for six weeks and effectively lost the whole season.

The 1979 season threatened to be the same. He broke his hand in the opening game of the year – against Fitzroy at Victoria Park – which cost him almost three months on the sidelines before he returned in stunning form with six goals and 22 disposals in Round 13 against Hawthorn.

Anderson kicked 29 goals from his 13 games in 1979. He didn’t play in the qualifying final loss to North Melbourne, but kicked five goals against Fitzroy in the first semi-final and three goals (opposed to Keith Greig) in the preliminary final win over the Kangaroos. He had 16 disposals but was held goalless in the five-point Grand Final loss to Carlton.

By 1980, he started to feel a bit on the outer at Collingwood and played only four games, most from the bench. He wasn’t invited back to training for 1981 and was instead offered a coaching job in Ararat, which he flatly rejected. Almost inconceivably, his VFL career was over before his 28th birthday.

He trained with Essendon for a period, but Collingwood requested a $20,000 transfer fee that the Bombers were unwilling to pay. Instead, the 28-year-old went back to where it started – Port Melbourne. He would go on to play in two more VFA premierships for ‘the Borough’, kicking five goals in the 1981 and 1982 Grand Finals.

Anderson’s uncanny knack of knowing where the goals were never wavered at whatever level he played, but Magpie fans wish they had been able to see it for longer.