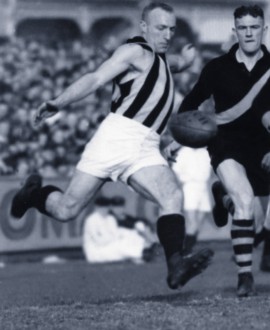 In the first nine years of the Copeland Trophy’s existence, it was won only once by a player who was NOT part of either the Coventry or Collier households. That player was dashing defender Harold Rumney.

Rumney’s triumph in the 1931 Copeland was a stunning tribute to the quality of his play. In those halcyon days most players were happy just to find a spot in the Collingwood team, so strong and stable had it become. With the Coventry and Collier brothers carrying all before them at both league and club level, there appeared little room for anyone else to get even a look-in when it came to end-of-season trophies. But Rumney dispelled those theories with his 1931 victory.

What made that victory even more remarkable was that it was achieved by a player who was primarily a half-back flanker — not the sort of position where you expect to find someone outshining the acknowledged stars of the team, who were usually key position or on-ball players.

But Rumney was himself a star — albeit an underrated one.

Although born in Kyabram, Rumney was a product of Collingwood Technical School. He and his family were forced to move to Melbourne due to an illness his mother was suffering. “The local doctor gave my father two choices: bury your wife here or get out to better climes,” Rumney once said. Not surprisingly, they chose the latter option.

The family settled in Fitzroy, and Harold later went to Collingwood Tech where he captained the school team. He played junior football at Kensington and Brighton and spent a year with Brighton seniors before joining Carlton — to whom he was residentially bound — in 1925. He played 13 games in his first year with the Blues and did reasonably well, but was not at all happy at a club beset at that time by internal bickering.

Rumney also developed an unenviable reputation for running too far with the ball. Carlton could not rid him of this habit, so rid itself of him. ‘They told me I was too old (at 19!), too weak and too gutless — a no-hoper in fact,” said Rumney.

On the advice of one of his brothers, he crossed to Collingwood, for whom he barracked anyway, and spent the rest of 1926 with the seconds. He had made such little impression during his time at Carlton that his clearance to Collingwood raised barely a murmur.

If his clearance attracted little attention, his performances for Collingwood were quite the reverse. Rumney quickly adapted to his new club’s style of play and, just as importantly, heeded Jock McHale’s advice about getting rid of the ball quickly. He was a late inclusion in the team for the first game of 1927 and performed creditably. He soon became a permanent and successful fixture in the Collingwood team, playing in 17 matches in his first year and booting 19 goals as a forward pocket/flanker. “Dasher”, as he was known to his teammates (though his family called him “Wal”), even took home a hat from Treadway’s in Smith Street as an award for the best first year player.

Despite his successes as a forward, the selectors decided to try him in a few other positions. Within a year he had established himself as one of the best defenders in the VFL. He played back pocket in the 1928 grand final and filled the half-back flank post with distinction in the last two of Collingwood’s historic four-in-a-row Premiership teams. Rumney played in all four of those teams and was a key contributor, regularly being named among the best players in finals’ games.

In 1930 he gained interstate selection for the first time, and his performances at the Adelaide carnival were such that he was awarded the trophy for the most consistent player of the series. That year he also won a trophy from the local Austral Theatre for best Collingwood player as voted by the public.

He was a player of exceptional speed who was capable of matching it with the best, most elusive and quickest forwards of his day. Importantly, his explosive pace was also accompanied by great ball control. Though he was only 170 cm (5ft 7in) tall and weighed only 71kg (11st 2lb), he could also match it with the bigger players. He was quite muscular, with a sturdy physique and broad shoulders that allowed him to tackle even robust opponents vigorously.

Despite his apparent lack of inches and pounds, his strong and determined play enabled him to regularly beat bigger opponents. And if they were at all sluggish, Rumney would use his pace to run off them, creating opportunities for his forwards with long, accurate kicking. His kicking to position was a feature of his game, as was his handball — considered to be unusually clever and accurate for his time. He was also a model of consistency, rarely turning in a poor game.

Rumney became one of the players who were crucial to Collingwood’s success during the late twenties and thirties. This was partly because of the important role he played in the renowned Collingwood defensive unit but also because of his adaptability, which allowed Jock McHale to swing him into any number of positions where his speed, skill and fearless determination were needed. Although best known for his work on the half-back flank and back pocket, he also spent time at half-forward, across the centre line and even on the ball. It was this flexibility that may have led Collingwood to “discover” the position of ruck-rover, when Rumney was thrown onto the ball in a game against Richmond when the recognised followers had been tagged out of the game.

Later in his career Rumney moved back a further notch in defence, to the back pocket. In the 1935 Premiership he formed part of a highly regarded back line, playing alongside the great Jack Regan and Charlie Dibbs, who had moved from full-back to the back pocket to accommodate Regan.

Rumney returned to Victoria Park for the 1937 season in order to secure his ten years service, but played so well when given his chance that he played 13 games that season, finishing up in the grand final against Geelong.

Harold’s on-field athleticism carried over into his off-field activities as well. He was a fitness fanatic who, like quite a few VFL players of his era, took up footrunning during the summer months. He ran professionally at meetings around the State and was first over the line in a number of races, including the Shepparton and Frankston Gifts. With his devotion to physical fitness it was no surprise to find that Rumney was one of the most enthusiastic trainers at Collingwood, regularly winning training prizes.

Outside of sport, Rumney enjoyed the performing arts. He took part in many amateur dramatic plays, something which probably sprang from what he said was “an innate desire to show off” that he displayed as a child. He was also a first-class musician, playing the trumpet and cornet. Late into his life he still performed regularly for pensioner and community groups around the Mornington Peninsula, where he lived during his years in retirement.

It was a call of a different kind to which he responded when the Second World War broke out. An engineer by trade, he joined the navy and was one of the survivors when the HMAS Canberra was sunk by the Germans in the Indian Ocean.

For all the grand service he tendered his country, it is the service he gave Collingwood for which Harold Rumney is best remembered. Few who saw his strong, dashing play will forget it, or the key role he played in some of the finest sides Collingwood has ever sent on to a football field.