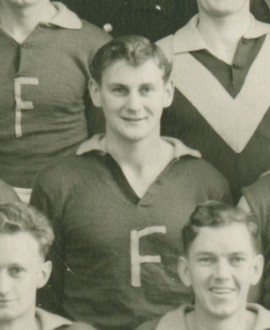 Not too many footballers can claim to have played their one and only senior VFL/AFL match before they’d played in either reserves or under-19 football. But Magpie big man Harry Paynter is one of the select few who holds that honour.

Harry had been playing with Fairfield in the mid-to-late 1940s when he started to come under the attention of League scouts. He lived in Collingwood’s zone, but that didn’t stop North Melbourne from inviting him down to a trial game ahead of the 1950 season. He did well too – so well, in fact, that the Pies immediately sat up and took notice, asking Harry to play in their practice match the next week.

It produced a similar result. “An interesting newcomer was Harold Paynter, who took part in North Melbourne’s practice game last week, but who is a Fairfield boy,” reported the Argus. “Collingwood asked him to attend, and he proved a likely looking follower. He will be further tested in the next practice game.”

Harry arrived at Victoria Park at a dramatic time. Young champion Len Fitzgerald (who Harry had played alongside at Collingwood Tech, together with Test cricketer Neil Harvey) left for SA in dramatic circumstances pretty much the day he arrived, and there was a wild internal revolt over the choice of coach to replace Jock McHale. One of the practice matches in which Harry starred was the one that became famous for the fan protest that saw Bervin Woods replaced after just a week as senior coach.

Harry performed so well in those practice matches that he was named on the bench for the first senior game of the season against South Melbourne, despite never having played in the seconds. He came off the bench and remembers an early clash with South ruckman Bert Lucas that left his shin with scars that stayed with him for the rest of his life, courtesy of the stops on Lucas’s boots. “It was kind of like a badge that I’d played VFL football,” he said later in life.

Incredibly, that was both the start and end of Harry Paynter’s VFL career. He got his first taste of reserves football the following week and stayed there for the rest of 1950, totaling nine games. He was troubled by frequent injuries, and again in the lead-up to the 1951 season. He went back to Fairfield in ’51, and was cleared to Northcote in the VFA in 1952, at the same time as two other Magpies, Jack Purdon and Bill Nolan.

He played more than 70 games with Northcote, where he was better able to showcase the strengths that had seen him given his VFL opportunity in the first place: strong marking and long kicking. He played mainly in the ruck or back pocket and was a reliable performer.

He also had great stamina and could run all day. While at Collingwood he’d played as an amateur so that he could compete at athletics with Collingwood Harriers. He was a decathlete of some renown, and later took up cross-country running.

Late in the 1950s he was given the opportunity with his work to manage a new factory in Adelaide. With just 24 hours to think about it he decided to take up the offer – and Victorian football was the loser.

Harry himself decided to give the game away (despite playing one game with Norwood under an assumed name), but his son, John, went on to become one of the finest SANFL footballers of his generation, playing more than 300 games and winning four club best-and-fairests with first Glenelg, then Sturt. John’s son, Will, also played senior SANFL football.

It’s frustrating to think that a player as good as John Paynter could maybe have been residentially tied to Collingwood had Harry not shifted to Adelaide. It certainly would have given the family name a higher profile at our club than it’s enjoyed on the back of Harry’s solitary game in the opening round of 1950.