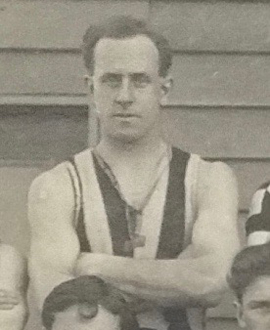 In the early years of the 20th century, footballers wanting to play with Collingwood often got their start with the Collingwood District Football Club: it was effectively the Magpies’ reserves team, and seemed the ideal way to come under the notice of senior selectors.

But it didn’t work for everyone. Horrie Jose, who was born in North Melbourne and lived in Carlton, joined the District team in 1912 and spent a couple of seasons there. But he felt he wasn’t getting the results he wanted, so shifted to the rival Melbourne Districts team in 1914. That proved to be a good move, because his performances at Melbourne drew him an invitation to train with Collingwood seniors in 1915.

In April of that year he made the most of his opportunity, shining in several of the intra-club practice matches (played between the ‘Blue Birds’ and the ‘Magpies’) and won a place not just on the senior list, but in the team for the first game of the season, alongside fellow debutantes Sam Mortimer (who would serve with Jose at the Front) and Con McCarthy, who would later captain the Pies to a flag.

The Football Record reported that all three recruits had made “excellent” debuts, but only McCarthy, who had starred, survived into the second week. Jose made six other senior appearances in 1915, the Sporting Judge describing him as “a ‘baller of some class”, but never looked like commanding a regular place.

Jose stood around 5’ 10″ tall and was well built, but also quite athletic and capable of strong bursts out of defence. He played mostly in the back half but was also capable of stints forward, or following. He reminded one reporter of ‘Doc’ Seddon in both physique and style, and that is how Collingwood saw his possible role – a follower/defender/forward who could be played in a variety of positions. But there were, it seems, too many rough edges to his game, and consistency was a problem.

He had one thing in his favour, however: he was a tireless worker on the training track, something that was reflected when he won the team’s main training prize for 1915 (a suit of clothes from Treadway) and figured prominently again in 1916 (winning two guineas).

That hard work looked to have paid off early in 1916 when he surprised many onlookers with a near best-on-ground effort against Carlton in Round 2 – a performance highlighted by one memorable passage where he repelled three dangerous attacks in quick succession, the last of which finished with him charging down the ground to set up the Pies’ first goal.

“Jose has immensely improved as a footballer, both his marking and kicking being reliable,” noted the Leader. “The inclusion of Jose was a striking success, his defence all through being sound and brilliant,” said the Australasian. “Jose, although inclined to be a trifle wild and erratic, yet was ever in the thick of it – making mistakes, certainly, but rectifying them immediately by his determination and persistency.”

Unfortunately for Horrie, misfortune struck just as he looked to be settling into VFL football. He injured his leg against Fitzroy the week after his stellar performance against Carlton and missed seven of the next eight games. When he returned late in the season, he failed to have the same impact.

By the time the 1917 season kicked off, Horrie Jose had already joined the Australian Flying Corp. He was 24 by this time, a woodworker living in Carlton with his mother, and he managed only three more games before heading into camp. He spent most of his time in Egypt, but was also spotted captaining a football team playing scratch matches in the English countryside while waiting to be deployed (South Melbourne’s Jim Stewart led the opposition).

Horrie returned to Australia in 1919, just a couple of days before his fellow soldier and similarly-styled footballer, Seddon. He began training with Collingwood almost immediately, resumed playing with Collingwood District and was called in for a couple more senior games late in the year, the Football Record noting his “good reappearance”.

But that was to be the final chapter in Horrie Jose’s VFL career. He crossed to Brunswick in the VFA in 1920 and played some good football, still mainly out of a back pocket. He was a determined, hard working and committed footballer: qualities that served both Collingwood, and his country, well.