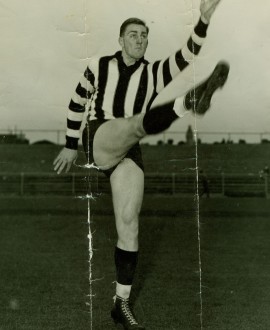 A highly-talented full-forward, Brewer topped the League’s goalkicking with 73 goals in 1958. He also topped Collingwood’s goalkicking in 1957 with 26 goals.

Brewer kicked six goals in the famous mid-1958 clash with Melbourne that attracted the biggest home and away crowd of all time (99,346).

His best haul in a game was eight.

He played in the famous 1958 flag side and was also in the losing Grand Final side of 1960, but he was still recovering from the after-effects of hepatitis which he caught in 1959 when the club inoculated players against the flu and re-used a needle in the process.

He crossed to St Kilda for a season in 1962 but could not get a senior game.

Brewer later played for WAFL club Claremont, where he became their leading goalkicker in 1963 and was part of their premiership side in 1964.

The following year he kicked 96 goals for Norwood to top the SANFL list.