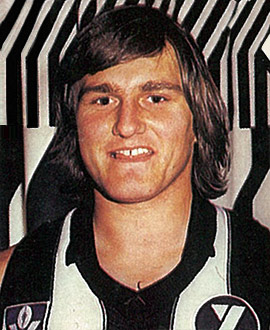 Most footballers have to go through serious levels of pain and discomfort if they’re to carve out a decent career. But it’s highly likely that no Collingwood player has ever had to endure the frustrations and hurdles that burly defender Ian Cooper had to overcome.

‘Strop’, as he was widely and affectionately known, missed the best part of five years of football through a succession of injuries, mostly due to chronically arthritic ankles. But he persevered and persevered and eventually managed to take his tally close to 100 games spread across 11 years.

In that time – and especially in the largely uninterrupted span from 1974-77 – he built a reputation as one of the meanest backmen in the game. Collingwood fans have always loved their tough, battling, no-nonsense defenders, and in Cooper they had a beauty.

He actually came to Victoria Park as a forward from East Reservoir. He kicked 13 goals from seven games in the under-19s in 1971, and seven from 10 games in the reserves the same year. By 1972 he was a reserves regular (indeed he finished second in the reserves best and fairest), albeit mostly as a defender, and in round 21 – still only 18 – made it to the bench for what proved to be an unremarkable senior debut against South Melbourne.

A few weeks later, the senior team was hit by a raft of injuries for the First Semi-Final against St Kilda. Lee Adamson, Ted Potter and Peter McKenna were among those missing, while Ron Wearmouth was suspended. Graeme Dunstan was brought in for his first game to fill McKenna’s shoes, while Cooper was named in defence for his first full game in what was described as a selection ‘bombshell’. Certainly not many had him on their radar as a likely replacement for any of the missing backmen.

The Pies were awful against the Saints and were knocked out of the finals. But Cooper and fellow new boy Dunstan both did well. The club presented Ian with a special trophy a few weeks later for ‘services in the final match’, while the Age named him among the club’s best players, saying he was “never outdone” and “kept battling on”. They were qualities Cooper would display often in the years ahead.

After such a promising debut, hopes were high for Cooper in 1973. But when the final lists came out he was mysteriously nowhere to be seen. He had contracted a type of rheumatic fever that caused swelling in his ankles and was diagnosed as arthritis. Doctors advised him to stand out of football for 12 months.

By the time he returned to football in 1974, Cooper had filled out physically and felt increasingly at home in defence. His critics said he was too short for a key defensive post, but he had no problems playing at full-back or in the back pocket. He made everyone sit up and take notice when he kept an admittedly ailing Peter Hudson goalless in round two, and went from strength to strength thereafter, playing 18 games for the year before ankle problems prematurely ended his season.

Something else had changed by 1974 too. The Paul Hogan Show had become one of the most popular programs on TV, and it featured Hoges’ dim-witted housemate ‘Strop’ (played by Hogan’s friend John Cornell, a successful businessman who later played a key role in the formation of World Series Cricket). ‘Strop’, it has to be said, bore an uncanny resemblance to Ian Cooper.

So, armed with a new nickname and an ostensibly fit body, Collingwood’s ‘Strop’ set about the golden years of his career. From 1974 to 1977 he was a regular in the Magpie defence. Tough, strong, uncompromising and fearless, he was a nightmare for opposing forwards. He could take a good mark and was surprisingly speedy once he had a head of steam up, his surging bursts from defence becoming something of a trademark. But his main strength lay in being able to nullify high-scoring forwards. He wasn’t afraid to get physical when he needed to, and alongside similarly rugged colleagues such as Phil Manassa and later Stan Magro and Kevin Worthington, he made the Collingwood back line a scary place to be.

Fitness was never his strong suit (he finished last in the 1976 pre-season cross-country run), but he was an assiduous trainer and won a television from Canberra TV in 1974 for “dedication to training”. The next year he was named the club’s most consistent player and awarded the J.F. McHale Trophy.

Late in Collingwood’s barnstorming 1977 season, Cooper went down with ankle problems that forced him out of the finals series. He initially thought it a recurrence of the 1973 injury, but it turned out to be a chipped bone and ankle spurs. That was bad enough, but recurring arthritic problems with his ankles, back and even a dislocated shoulder saw him miss all of 1978, play only one game in 1979 and miss all of 1980. He became a kind of ghost figure at Collingwood – often mentioned but rarely seen.

But Cooper never gave up. One game in three years and he never gave up. It was hailed as one of the great comebacks when he eventually returned to the team for a few games midway through 1981. He spent much of the year captaining the reserves and was set to retire at the end of the season, but when the senior team was hit by injuries to Peter Moore, Stan Magro and Andrew Smith, the Pies pulled a major surprise by naming him in their Preliminary Final side. At that point it had been 14 weeks since his last senior appearance.

Cooper responded by playing one of the best games of his career. Many critics chose him as best on ground, and credited him with piloting the Pies to another Grand Final.

“Cooper did a marvellous job of refuting the generally accepted view that he was an ageing backman with suspect ankles,” wrote Trevor Grant in the Age. “He jumped, danced and dodged his way out of strife so many times and made the Geelong forwards who had destroyed the Magpies in the Qualifying Final look remarkably inadequate.” “His courage and spirit typifies everything that is Collingwood,” wrote the Sunday Press.

The fairytale ending, of course, would have seen the Pies win the ’81 flag and Cooper retire with his Preliminary Final performance a fresh reminder of the qualities he brought to his football. But Collingwood lost, and Cooper decided to extend his career. He managed only eight games in 1982, then in the 1983 pre-season was suspended for four weeks for whacking a Footscray opponent during a charity match to raise money for the victims of the Ash Wednesday bushfires. He never regained a senior berth, and eventually left for Port Melbourne in the VFA.

Ian ‘Strop’ Cooper was one of those players that fans love. His whole-hearted, full-on (and sometimes aggressive) approach to footy endeared him to the Magpie faithful from day one. But his long and determined struggle to return to senior football after suffering such debilitating injuries made him even more popular. He was an underrated footballer but one of the finest Magpie defenders of his era. That 1981 Preliminary Final was just about the perfect footnote to his career.