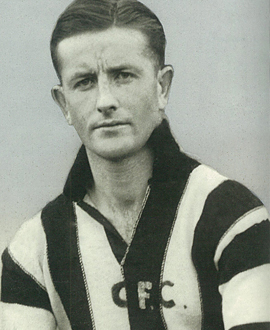 The simple black-and-white striped guernsey has become a part of Collingwood since day one, and has become the most instantly recognisable club symbol of all.

In the period when Collingwood was being formed, early in 1892, it became obvious that the club would need a different uniform from that of Britannia, the club which was the precursor to Collingwood.

Britannia’s colours were blue and white with a scarlet sash and it was considered that those colours too closely resembled those of Footscray, a team that was already in the VFA.

Williams Samuel Crawley was a supporter who had returned from a trip to South Australia, where he South Australia’s inter-colonial football team and was impressed with their black-and-white jumpers.  As a local, he also knew that magpies were abundant in and around Victoria Park.

The suggestion was readily accepted by the club and right from its very first match, the team has appeared in the black-and-white jumper.