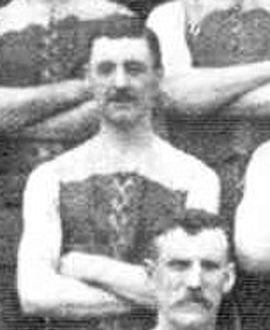 It’s safe to say that Harry Newbound holds a unique place in history as the only Collingwood footballer to have ever played against one of the world’s most famous baseball teams, the Chicago White Sox.

That remarkable feat came in 1914, long after Harry had retired from football and had instead devoted himself to another of his great sporting loves, baseball. The White Sox – along with the New York Giants and the man then considered to be the world’s greatest athlete, Jim Thorpe – had all come to Australia as part of a money-making world tour which was the brainchild of the owners of the two teams.

The teams spent weeks in Australia, playing in Brisbane, Sydney and Melbourne, followed by an aborted trip to Adelaide at the end. It was at the MCG in January of 1914 that Newbound lined up against them, while playing third base for the Victorian side before around 5000 fans (the Vics lost 16-3).

That was undoubtedly the sporting highlight of Harry Newbound’s life. But the rest of his CV doesn’t read too badly either, taking in games with two VFL/AFL clubs and a wonderful contribution to cricket as well.

His football career started with Collingwood Juniors in 1901, where he made a name for himself in the centre. From there he was plucked to appear with the senior Magpies for the opening round of the 1902 season against South Melbourne. He was named on a half-forward flank, though one newspaper later reported that he’d been badly beaten in the centre.

Either way, that was the end of his senior Collingwood career. He returned to play with local junior side Blenheim. In 1903 he returned to the Collingwood Juniors, where he enjoyed a brilliant season, playing 14 games and kicking nine goals, including three in the final against South Melbourne.

Presumably on the strength of that showing, he was picked up by Carlton for the 1904 season and he played 18 games there over the next two seasons. By this time the Collingwood Juniors team had folded, so Harry resumed playing with the newly formed Collingwood Districts.

When his footballing days were eventually ended by injury, Harry continued playing cricket and added baseball to his roster. He started playing around 1909 as a third baseman with Collingwood in B Grade, but when the club was promoted to A Grade he became captain and catcher. He would continue playing until 1923, representing Victoria against the White Sox in 1914 and again against South Australia in 1921.

He was heavily involved off-field too, becoming the first executive officer of the Victorian Baseball Union in 1915 and later its treasurer. He continued to serve in important off-field roles until 1937. He was similarly heavily involved with the Collingwood Cricket Club, becoming one of its earliest Life Members and still being a vice-president in the 1950s!

Harry’s brother, Arthur, would go on to enjoy a similar length League career as he had done, playing 24 games with Fitzroy and one with St Kilda between 1909-11.

Harry Newbound’s overall football career was not momentous – 19 games and two goals. But his overall sporting career was astonishing, with monumental contributions to both cricket and baseball. Plus, of course, that rare feather in the cap of having lined up at third base against the mighty Chicago White Sox.