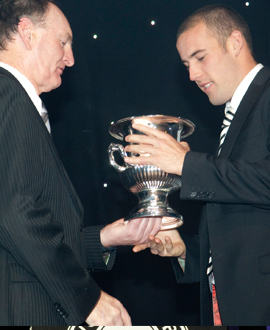 The trophy for best and fairest player in the club’s reserves team is only easily traceable from 1940 onwards. Between 1919 and 1939, the Collingwood District Football Club acted as our seconds team. But this was a stand-alone club, with its own committee, and it issued its own annual report. As such, records of award-winners are extremely difficult to find (if you have any old CDFC annual reports, please contact us).

In 1939, the Collingwood Football Club took back control of its reserves team as part of a bitter internal conflict. Its first couple of best and fairest awards carried no name, but in 1943 it was named after Jack Eastman, a local councilor who was an influential figure in the club’s early days and who spent more than 20 years as President of the Collingwood seconds. After a short hiatus in the 1980s, the award was in 1988 named after Joseph Wren, the son of legendary club benefactor John Wren.

John Wren was a legendary Australian businessman who was extremely influential in Victoria during the early decades of the 1900s and a patron of the Collingwood Football Club. Joseph became a club benefactor in his own right during the 1940s-60s, and was a key figure behind the scenes at Victoria Park.