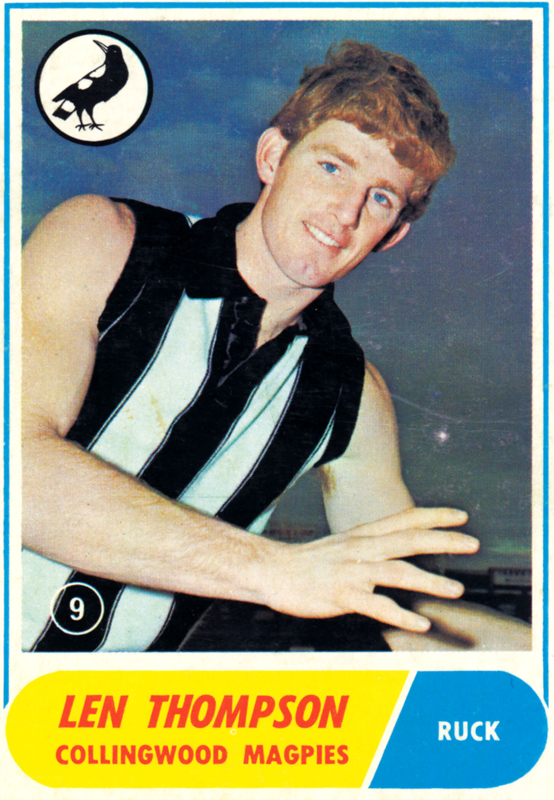 Collingwood ruckman Len Thompson ended the club’s longest Brownlow Medal drought – 32 years – at the 1972 count and was forced to wait until the last possible moment to secure it.

The Magpies had not had a winner since 1940 when Des Fothergill tied with Herbie Matthews, with Bob Rose (1953) and Neil Mann (1954) coming the closest as runners-up in their respective years in the meantime.

But Thompson was tipped as a huge chance – in performance and in stature – in 1972 after an outstanding season for the Collingwood big man.
And after a tense medal count, which was only the third to be televised live, everything came down to the last vote of the night.

As it was back then, the VFL would sort through the votes earlier to achieve what was almost always a tight finish, manipulating the release of the votes in order to build the climax for the viewers.

So when Melbourne’s Greg Wells drew level with Thompson late in the count on 22 votes, the crowd at Chaucer’s Convention Centre knew there was likely to be another dramatic twist to the count.

The announcer declared: “Ladies and gentlemen, there is one vote to come; it has all come to this, the final vote … Collingwood, L.Thompson”.

The three votes took Thompson, who had just eight days earlier celebrated his 25th birthday, to 25 votes, which put him three clear of Wells, who was left with his head in his hands.

And as the Collingwood big man was embraced by those around him, Mike Williamson screamed: “Thompson’s won it; he won it on the last of the votes with 25.”

It was a fitting reward for the footballer who had been recruited from Reservoir and who had debuted as an 18-year-old in the 1965 preliminary final loss to Essendon.

He had been, as his teammate Peter McKenna put it, “the first of the running ruckmen … he would run and bounce and kick with both feet. His palming of the ball was unbelievable.”

In a sense, he helped to revolutionise the role, even if he was not immune to a bit of controversy, most notably when he and Des Tuddenham went “on strike” for a period before the 1970 season.

But while that caused more than a few internal issues, Thompson would enhance his role as one of the game’s greatest ruckmen through the late 1960s and 1970s, with his 1972 season being his most impressive.

Thompson would only poll one fewer vote the following season, yet would finish fourth, six votes before the surprise winner, North Melbourne’s Keith Greig.

He would later recall the tension on the night when he won his Brownlow Medal, saying that a few people mentioned to him during the count that he would be the winner.

That night he went home to his house at Montmorency where the celebrations continued on until the early hours of the morning.

When Thompson decided to sell his Brownlow Medal to help his children in 1999, he faced a mixed response, though his teammates and friends understood what he was trying to do.

And the man himself articulated it best in the book, The Brownlow, A Tribute to the Greats of Australian Football, saying: “I think some people are confused as to why I did it, but it had a lot to do with the fact that I did not play in a premiership side. That had a dramatic effect on my life.”

“I have never really come to terms with it, and that’s why I could do something like that (sell the medal). If I had won a premiership medal, I would cherish it and never sell it.”

Sadly, that would never happen for Thompson or his Collingwood contemporaries.

But, as a Brownlow medallist, he knew the award changed his life – for the better.

And when he died, in 2007, just after his 60th birthday, it was in the lead-up to another Brownlow Medal count where he will be forever be remembered.