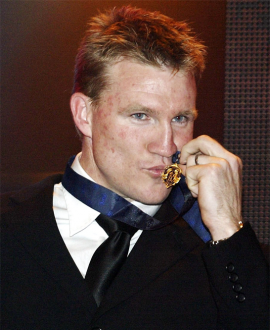 Few footballers of the modern era have been as decorated as Nathan Buckley, but for a time it appeared as if the only individual award likely to elude him was the Brownlow Medal.

The Collingwood midfielder had endured some agonising near misses in football’s most prestigious individual award – second in 1998, equal third in 1999 and equal fifth in 2000.

And Magpie fans were beginning to fear Buckley would not achieve what had looked like his destiny since first donning the black and white.
Before the 2003 season Buckley had polled 143 votes across his 10 seasons.

Many wondered if the 31-year-old’s last chance might have come with the 2003 season, when he went into the count as one of the favourites and with a 48-hour betting plunge on him to win the medal.

But his chances looked more than a little remote when he polled only eight votes in the first half of the season, leaving him six off the leaders.
It seemed as if his past run of near misses would come back to haunt him.

But just as Collingwood’s season took a turn for the better in the second half of 2003, so too did Buckley’s efforts as he polled votes in seven of the last 10 matches.

And his one-vote performance against Essendon in the final game of the season – a 27-possession, two-goal effort – was enough to bring about the first three-way tie since 1930.

Buckley shared the stage and the Brownlow Medal status with Sydney’s Adam Goodes and Adelaide’s Mark Ricciuto in one of the tightest counts in the history of the award.

The trio finished on 22 votes, with three past winners Shane Crawford, Ben Cousins and Gavin Wanganeen only one vote behind, and two more, Michael Voss and James Hird, one more vote further back.

“It’s a great feeling,” Buckley said. “I’m a big fan of ‘Roo’ (Ricciuto) and the way he goes about his footy. And Adam Goodes epitomises everything about the modern game.”

He was surprised that he had that one vote left in him in that final game, saying: “I didn’t think I had enough ‘vote-games’ on the way home, but I plucked one out of thin air. That’s the nature of the game.”

The Collingwood captain, who drank water on the night as he was preparing for the Grand Final on the following Saturday, had a most consistent season, polling in 12 games.

Incredibly, Buckley only polled two best-on-ground performances – in Rounds 13 and 15 – but he was judged as second best on the ground in six games, with four one-vote efforts as well.

Buckley’s speech after winning the medal told of a football journey that stretched across various state and territories, but one which always seemed destined to result in great success.

“I was born in Adelaide and had a fair journey around Australia, but I’ve always had the support of my family and my extended family,” he said after Ron Evans placed the medal around his neck.

Fittingly, it was his Collingwood president Eddie McGuire, who was hosting the night, with Channel Nine screening the medal count at Crown.
Buckley brought a smile to the room when he said: “Ed actually told me if I had got up tonight that he was going to pash me … I’m just thankful he hasn’t parted one on me yet.”

But it wasn’t just the Brownlow Medal that made the season an important one for Buckley. Having equalled Len Thompson’s record number of Copeland Trophy wins in 2000, he became the outright holder when he capped off the 2003 with his sixth and final Collingwood best-and-fairest award.

While Ricciuto and Goodes enjoyed the night and stayed long into the next morning, Buckley had more important things to concern him and left soon after the presentations and press conference.

He was up bright and early the next morning focusing on the premiership playoff scheduled for the next weekend. And he took his medal to training, stashing it in his mouthguard container.

Sadly, six days after winning the Brownlow, he was denied the other medal he desperately craved – a premiership one – when Collingwood was overwhelmed by Brisbane in the 2003 Grand Final.