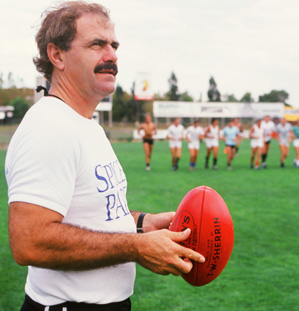 In the mad minutes after Collingwood broke the longest and most embarrassing drought in its history in 1990, its chairman of selectors Ron Richards summed up the feeling of so many at the club and of its legion of supporters in one sentence.

Asked what had made the difference after 32 years, Richards said: “We broke the drought because we employed the greatest footballer of the post-war era and watched him become the greatest Collingwood coach.”

Sure, there was a bit of hyperbole in this comment. After all, Jock McHale won eight premierships as a coach, while Matthews’ flag return from 10 seasons as Collingwood coach was one – albeit one of the most important in the club’s history.

But, in many ways, the sentiment was not too far off the mark.

Matthews helped to transform a football club anchored by the failures of the past into a modern team committed to one another and divorced from the pressure that had attached itself to so many other black and white sides.

The former Hawthorn champion was all about the present – and the future – rather than the past. He urged his team to make their own history, not to be burdened by a past that was not of their making.

Matthews was appointed as an assistant coach to the great Bob Rose for 1986 – having first been approached by Rose during Hawthorn’s 1985 series – with the view that he would take over for the 1987 season.

But after three losses to start the 1986 season – amid a tumultuous time on and off the field at Victoria Park – Rose called Matthews on the Sunday morning and told he was ready to hand over the reins immediately.

Matthews was excited by the challenge, but realistic. He told the media: “I make no promises whatsoever … Talk of premierships and the (top) five are pretty much folly. Let’s just take it a week at a time.”

He insisted he would look to build a side based on defence. And he wanted to indoctrinate the professionalism that had driven Hawthorn through the 1980s into those already at Collingwood, and those who come in the future.

Matthews had a win in his first game as coach and would oversee a debut season where the Magpies would win 12 games and miss the finals only on percentage.

In a sign for the future, the club’s under 19s side, comprising players such as Gavin Brown, Damian Monkhorst, Mick McGuane and Gavin Crosisca, won the flag.

Yet all the good work was undone the following season as Collingwood slumped to 12th, winning only seven games. Matthews would recall how some questioned his coaching that season – “there were some unhappy people … mainly in 1987 when things were going bad. Then I doubted – everyone doubted.”

The next two seasons brought finals campaigns, but more frustration. The Magpies finished the home-and-away season second in 1988, yet went out in straight sets with losses to Carlton and Melbourne. And a year later Melbourne once more proved a stumbling block in an elimination final as Collingwood finished fifth.

Few people saw what was coming in 1990, but Matthews knew his team – one he had carefully and sometimes ruthlessly constructed – was building towards something special.

In the first year of the rebadged Australian Football League, Collingwood had an outstanding home-and-away season, finishing second to Essendon, and yet Matthews’ team was able to produce an even more remarkable finals campaign.

Having drawn with West Coast in the qualifying final, the coach inspired his team onto a big win in the replay and a comprehensive victory over Essendon in the second semi-final.

Matthews kept his players insulated from the external pressure that was building on them. He would explain: “We’ve probably had to divorce the team from the club a bit … The club’s been here for a hundred years and it will be around for another hundred, but the team is the players who are here now.”

In a sense, Matthews had purged the ‘Colliwobbles’ tag from the minds of the players. And it paid dividends as the club won its first premiership since 1958, with a dominant performance to restrict Essendon to only five goals in the Grand Final and to win by 48 points.

That night, in the ebullience of the moment, president Allan McAlister basically guaranteed 38-year-old Matthews the Collingwood coaching job for life.

McAlister told the premiership gathering at the Southern Cross: “(Matthews) won’t get away from us until he is too old and decrepit to do anything for anyone else.”

But the next five seasons failed to produce another flag. A premiership hangover cost the club in 1991; it was unlucky in its finals campaigns of 1992 and 1994; and it missed out entirely on September action in 1993 and 1995.

At the end of 1995, that “job for life” guarantee was gone. Matthews was told that after 10 seasons – and despite bringing about the most cherished of all the club’s premierships – the board wanted to go in a different direction.

He was philosophical, saying: “I can see where they’re coming from, so there’s animosity. Sometimes you just need a change and sometimes the easiest position to change is the coaching position.”

McAlister, who was also about to leave the club, told the media he had no regrets about his statement from 1990. “Of course, I don’t. That was after a flag. Be realistic. Indeed, I’m so sad today.”

Matthews still had plenty of football life left in him. He would “get away”, coaching the Brisbane Lions to three successive premierships (2001-03), including wins over Collingwood in the latter two years.