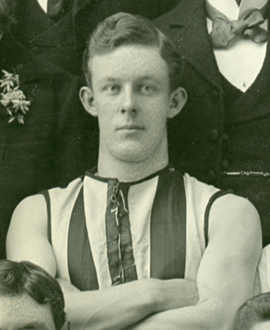 Among the most emotive of all sporting stories are those which tell of the game’s tragic young figures — those exceptionally gifted sportsmen who, for one reason or another, are fated to live only short lives.  Collingwood’s enigmatic centreman around the time of Federation, Fred Leach, is one such story.

Leach was a footballing phenomenon around the turn of the 19th century. He was widely considered the best centreman — and one of the best footballers — of his day. But he was a fragile champion, whose career was frequently interrupted by injury, illness and occasional bouts of indifference to the game over which he held such mastery. In the end that career lasted just 83 games, and was over by the time he was 25. His life was to last only a few more years.

John Frederick Leach was born in 1878, the second son of Englishman Thomas Leach and his South Australian wife Emma. It is not known if Thomas Leach had any sporting bloodlines, but he certainly sired three outstanding footballers. Fred Leach was part of one of Collingwood’s best performed, but least well- remembered, footballing families. His older brother, Arthur, played nearly 170 games in 11 years, while younger brother Edward also played with Collingwood, notching up 22 games in three years before crossing to Melbourne and later Richmond .

Fred was by far the most talented of the three. The boys’ father was a bank manager who lived in the suburb of Heidelberg, but he later moved into the country and became a grazier while his sons remained in Melbourne. Fred and Arthur both moved to Surrey Hills and began playing with the Boroondara Football Club in the Metropolitan Junior Football Association.

The two eldest Leach brothers performed well with Boroondara — well enough to gain selection in the Combined Juniors team which played Fitzroy prior to the VFL’s inaugural season in 1897. That was all the break Fred needed. His play in that game was so good that Collingwood, the reigning VFA Premiers, enticed him to Victoria Park for a training run just a few games into the season.

Several weeks later the 19-year old with the boyish face travelled to Adelaide with the Collingwood team on one of its mid-season trips, and showed enough promise there to be included in the senior side upon his return. In his very first game, against Carlton, he sprained his ankle and was forced out of the team. It was an unnervingly accurate portent of the misfortune that lay ahead for Fred Leach.

In those early games he played mainly in defence. But when Bill Strickland retired at the end of 1897 the centre spot became available, and Leach snared it. It was not long before he had established himself as one of the premier footballers of his time, and probably the game’s most dangerous centreman.

Fred Leach was a magnificent athlete with a superb build ideally suited to playing in the pivot position. He stood about 183cm (6ft) tall, weighed around 82.5kg (13 stone) and was said to be able to run 100 yards in almost even time. He was a vastly different type of player to his predecessor in the centre post, Strickland, wandering much further from home — something that was almost revolutionary in those days of strict adherence to position play.

“Contrary to all the traditions of successful football neither Leach nor Charlie Pannam (on the wing) troubles about keeping his place,” wrote “Observer” in The Argus in 1903. “In fact, they go with the ball and are really roving place men. That sort of thing is only possible to a very good or very cute player.”

Leach was a scrupulously fair player and, though it was said that he “did not spare his opponents” in bumping contests, he lacked Strickland’s vigour. Instead Leach created his own kind of mayhem — one based around an exceptionally high skill level. His height gave him an advantage in marking contests and his pace an edge in ground duels. His kicking was said to be “near perfection” and his ball-handling first-class.

Indeed, “perfect” is a word which often used to crop up when Fred Leach’s play was discussed. In 1899 one critic described his football as “the perfection of artistic cleverness”. In 1901 another scribe described a Leach display as “a perfect exhibition of all-round football that compelled the admiration of every individual by whom the match was witnessed”.

Even opposing fans were  in awe, as one Fitzroy fanatic revealed in 1900. “If we had Fred Leach we’d lick creation,” the man told The Herald’s “Kickero”. “He’s the wonder of the age.”

Nearly 50 years after Leach’s retirement, the former Collingwood trainer Wal Lee pronounced him to be the greatest player the club had produced. Former teammate Ted Rowell agreed. “He was almost irresistible in the centre, equally good in the air or on the ground,” wrote former teammate Teddy Rowell years later in The Sporting Globe.

A one-time opponent, South Melbourne’s Peter Burns, later rated Leach as the best centreman he had seen — a view also aired by The Herald in the 1920s and by former Carlton coach Jack Worrall. “The forwards ahead knew what to expect when Leach got the ball,” wrote Burns. “Let him get his foot to the ball and it was down the throat of a forward.” Even Jock McHale, renowned for his harsh judgements, could not suppress his admiration. “You haven’t seen a centreman if you haven’t seen Fred Leach,” he used to tell others.

Unfortunately, nobody could ever be too sure just when they were going to see Fred Leach. He suffered many injuries, but often just seemed interested in playing when the mood took him. In his seven seasons at Collingwood he retired three times and never once managed to string together more than ten games in a row — even when those games were counted over two seasons. Yet in 1898 he was so determined to play in one game that, for reasons that are unclear, he took to the field under an alias, “Wilson” (the same alias that was used several years later by Bill Proudfoot).

Contrast that with his approach in 1901, when he absented himself from three games in the middle of a career-best season in order to holiday in Sydney and Brisbane! Ironically this was the year in which, according to the club’s annual report, he was named by the press as the competition’s champion player of the season. He would later be named Collingwood’s Best Player in both that season and 1900.

He retired early in 1902, saying he “wanted to keep out of the bumps and bruises”, missing the first nine games of the year. Somehow he was persuaded to join the club on its historic “stab kick” trip to Tasmania in July, and recommenced his VFL career on the team’s return.

It is just as well he did, because he played a major role in the club’s first VFL Premiership later that year. The Magpies surprised everyone by playing  Leach at centre half-back on Thurgood in the Grand Final, and he did a superb job keeping the Essendon star quiet. With Leach blanketing Thurgood, Collingwood won the game comfortably.

But 1903 was to see the end of Fred’s erratic but brilliant career. He missed two of the first five games through illness, then broke his nose while playing against South Melbourne in Round 9 and promptly retired. Of course Collingwood had seen Leach’s “retirements” before, firstly at age 21 in 1899 (it lasted just two games) and then again in 1902. But this time it was permanent. Complications set in after his nose operation, compelling him to miss the rest of the season. Although he trained with Collingwood in 1904 press reports at the time said that Leach was “determined not to strip” for the club.

In 1905 he tried to go to Melbourne, but Collingwood initially blocked the move, saying he was still “a desirable player and fit for the team”. Leach then appealed to the League but his permit was refused. Collingwood did eventually grant the clearance, but the VFL then revoked his permit and he could not play anyway. Instead he returned to his old junior club, Boroondara, which had only that year amalgamated with Hawthorn and adopted the latter’s name.

Just three years later John Frederick Leach contracted typhoid fever and died. He was only 30. His life, like his football career, had been tragically brief.

Talents like Fred Leach are a rare commodity, and demand appreciation no matter how briefly they might hold centre stage. To this day he remains one of the most accomplished players in Collingwood’s history, and one of the most enigmatic. He was a reluctant star who promised even more than he delivered, yet his artistry was such that what he did deliver was memorable enough to leave an indelible impression.

It was this lasting impact that was touched upon in Collingwood’s annual report of 1908, which contained this simple tribute: “When the deeds of Collingwood are recounted, Fred must live in the hearts and minds of all old club members. Those who saw his play are not likely to forget him.”