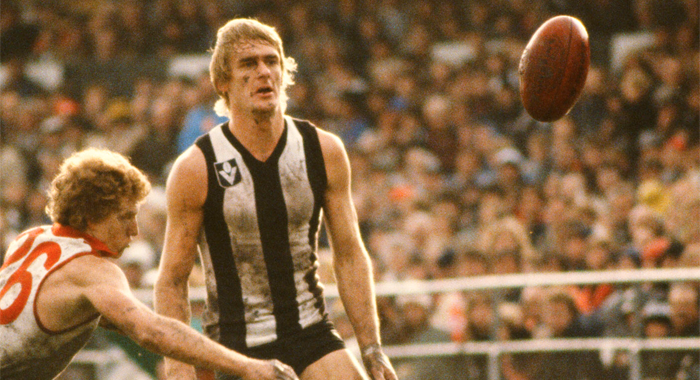 Collingwood ruckman Peter Moore credited the departure of the club’s previous Brownlow Medal winner Len Thompson for his breakthrough win in the 1979 award.

Thompson had been the Magpies’ No.1 big man for the better part of 14 seasons, winning the game’s highest individual honour in 1972.

But the decision of coach Tom Hafey to move Thompson on at the end of the 1978 season created the opportunity for forward-ruckman Moore to get a free run at the role he so desperately wanted in 1979.

And Moore’s reward was a stunning victory in the Brownlow Medal count with 22 votes, winning the award by a solitary vote from Fitzroy star Garry Wilson, with Melbourne’s Robert Flower a further two votes back.

Moore’s tally from his 21 games included five best-on-ground performances, with two second-best votes and three single votes. That meant he polled in 10 games, one more than Wilson, who played 22 games.

He led for most of the count, and in his acceptance speech he thanked his coach Tom Hafey for having the faith in him to take on the full-time ruck role after Thompson’s departure to South Melbourne.

“If Tom had not let Len Thompson go at the end of last year, I would not be standing here tonight,” Moore said.

But his focus when he stood at the podium looking out at the crowd at the Southern Cross Ballroom was the Magpies’ next game, the 1979 Grand Final, which was to take place six days later.

“Tonight is the greatest thrill I’ve had in my football life, and in my life anyway,” he said. “But the name of the game in football is to win premierships, and unfortunately we didn’t do that in 1977.”

“Collingwood and the Collingwood supporters have been waiting for 21 years for a premiership and to me, although this is wonderful and I am really honoured to receive it, I will be forgetting it and getting out there on Saturday to try and get best on ground.”

He would say later: “(After) not being involved in finals for four or five years in a row, then Hafey arrived at Collingwood and we went from bottom to top, making the Grand Final the first year (1977). That was probably my best period in terms of on-field performance. They were great teams and a terrific bunch of guys.”

Moore and Thompson had both been considered ruckmen ahead of their own time. Years later, Michael Horan, from the Herald Sun, would say: “Len Thompson, his Brownlow Medal-winning predecessor in the first ruck for the Magpies, was said to have been the new-age follower – tall, mobile and skilled. If that was the case, Moore was the superior sports model.”

Moore had been somewhat of a surprise winner, despite his outstanding season.

“But nobody can take anything away from Moore, who has unquestionable ability in the air and on the ground. At 22, he has the world at his feet. I think his best is yet to come.”

The ruckman would win a second Brownlow, though not in Collingwood colours. After a frustrating and divisive 1982 season, he left Victoria Park after receiving a big offer to join Melbourne.

In his second season with the Demons, Moore won the medal, polling 24 votes to edge out another Collingwood ruckman David Cloke, who finished second with 21 votes.