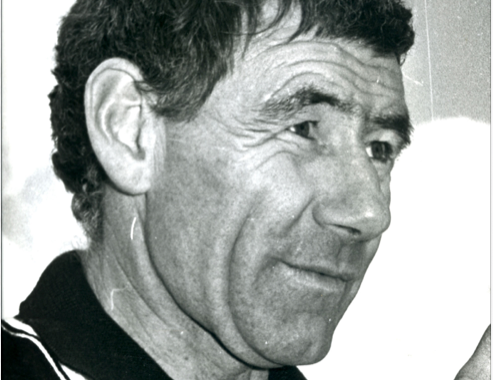 Tom Hafey coaching for Collingwood in the 1980s

TOM Hafey almost performed a miracle; maybe even a few of them. Sadly, in the end, he would join the luckless Bob Rose as Collingwood coaches who came so close to glory only to have it end in disappointment and despair.

When Hafey, a four-time premiership coach with Richmond, parted ways with the Tigers at the end of the 1976 season, it came at a fortuitous time for the Collingwood Football Club.

The Magpies were anchored on the bottom of the ladder after the worst season in the club’s history, and a chance meeting between Hafey and Collingwood president John Hickey brought about a perfect union.

Hafey had been a Collingwood supporter as a kid, and he passionately believed the Magpies’ team that had finished last under club great Murray Weideman in 1976, was a much better outfit than being the 12th-placed side.

Collingwood felt it had the right man, too, which saw them make the seismic shift of looking to an outsider – albeit a former black and white fan – for the first time in the club’s history.

No one, perhaps even Hafey, would have dared to dream just how fast the turnaround would be. By the end of the 1977 home-and-away season, the Magpies were on top of the ladder – the first time a team had gone from last to first in one year – and they were rightly considered as premiership favourites heading into the finals.

But Collingwood’s flag chances suffered a significant blow when one of its best players, Phil Carman, was suspended for two weeks for an unprovoked strike on Hawthorn’s Michael Tuck in the second semi-final.

It would cost Carman the chance to play in not one, but ultimately two Grand Finals. And Hafey would later declare the incident as one of the reasons why Collingwood did not win the 1977 premiership.

As it turned out, the Grand Final was a draw (only the second in history to that stage), but only after the Magpies had squandered a 27-point lead at three-quarter-time. After North Melbourne wrested back the lead, Magpie forward Ross ‘Twiggy’ Dunne levelled the scores after bringing down one of the most cheered marks in the club’s history, and kicking one of the most anticipated goals.

Unfortunately, Hafey’s men lost the Grand Final replay a week later, with some suggesting that the coach may have overtrained his team leading into that game.

Ray Shaw, who would become captain in 1979, later explained that Hafey’s simple philosophy and his insistence on hard work and hard training dramatically altered the philosophy at Victoria Park.

“He kept it simple. Get fit, be hard at the ball and get it down to the forwards as quick as possible,” Shaw said.

“It was basic, but inspiring. There was never any confusion. We got confidence from knowing we were fit, probably fitter than most other teams, and he preached the team over the individual constantly.
“He was tough, no question about it. You didn’t want to let him down.”

After making the preliminary final in 1978, Collingwood won its way through to the Grand Final a year later and took the game right up to Carlton. On a wet day at the MCG, the Magpies kept the Blues goal-less in the first term of the 1979 Grand Final, and fought hard to stay in the match when their opponent stole a march in the third term.

Gamely, Hafey’s Magpies fought hard in the final half an hour and for a moment looked like stealing the premiership that had been denied the club for 21 years.

Then, an act of inspirational brilliance from Wayne Harmes turned the game back in Carlton’s favour. His wayward torpedo was headed out of bounds before he launched himself and tapped the ball back to Ken Sheldon in the goal square.
No one knows for sure whether it was in or out, but the individual act helped to seal Collingwood’s fate – again.

It wasn’t even close in the 1980 Grand Final against Hafey’s former side, Richmond. The margin was 81 points, which was then a record Grand Final margin, but a quick glance at the Collingwood team that day shows a modest side that the coach was able to inspire enough to drag them into a premiership decider.

Another close call came in the 1981 Grand Final when the Magpies held a 21-point lead during the third quarter before the Blues launched a counter-assault, eventually depriving Hafey of another chance to end that Collingwood drought.

After being so consistent and plucky since Hafey’s arrival at Victoria Park, Collingwood slumped in 1982 and the coach paid the price. He was sacked midway through the season, which was a cruel way to end his time at a club that he took so close to that elusive premiership only to fall just short. It was a harsh call given the coach had won 89 of his 138 games at 65.22 per cent.