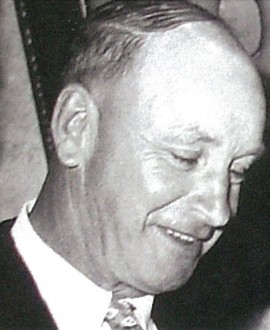 It is difficult to imagine a more difficult set of circumstances for a football club President to walk into than those that faced Syd Coventry when he assumed the post in 1950.

The club had been torn apart by the infighting over the appointment of a coach to succeed Jock McHale on the eve of the 1950 season. Club President Harry Curtis had been forced out, as had long-serving treasurer Bob Rush and a number of other board members. The members and fans were split and the whole club was in turmoil.

Syd, one of the club’s greatest leaders and players, had been acting as a vice-President since 1939. By 1950, with the club at arguably its lowest ebb since formation, the Magpies asked him to stand as President. After much consideration – he must have known how tough a job it was going to be – he said yes. And Collingwood will be forever grateful that he did.

It was a tumultuous first year. Every decision of the new committee was closely scrutinised by the press and the members. There were a number of contentious clearance applications, including one from young star Len Fitzgerald. There were the difficulties of handling the departure of Jock McHale and other long-serving stalwarts such as Curtis, Rush and ‘Rosie’ Dummett. And perhaps most of all there was the need to heal the wounds felt by friends of many years standing.

Somehow, under Syd’s calm, measured and reassuring leadership, the team was back in a Grand Final within two years and Premiers by the third. The club’s annual report described that 1953 flag as “a wonderful reward for [Syd’s] painstaking efforts of the previous three years of hard work, continual deliberation, and sincere application.”

But even bigger off-field victories lay ahead. Having succeeded in stabilising and reuniting the club in the wake of the 1950 fracas, Syd and his team now set about building for the future.

In 1956 the club won a long-term lease of Victoria Park from the Collingwood City Council, a move that secured the club’s future and also sparked a significant program of ground development and improvements, including the new state-of-the-art social club rooms that were opened in 1959.

“Our club has shown terrific expansion during the past 12 years, our team has been as successful in that period as in the previous 23 years, our members have facilities second to none in Victoria, if not Australia, and the club’s financial position, under wise management, has never been better,” noted the club’s annual report on Syd’s retirement. “Thanks for all are due to the most sincere, honest and genuine leader of our club – Syd Coventry.”

But Coventry was not only a big-picture President: he also did the basics well, missing only eight of the 370 committee meetings that were held during his 12-year reign at the top.

“As President, Syd always showed unfaltering faith and enthusiasm in the future of Collingwood, ever ready to offer encouragement to players and officials alike, whilst his ever-courteous manner and sincerity of purpose was always an inspiration to people to follow him unhesitatingly,” noted the 1962 annual report. “His outstanding ability and experience, his firmness and tact, mature judgment, diplomacy and strict impartiality were a tower of strength.

“In his dealings with players and members he must try to be as wise as Solomon and as impartial as a judge – he must be accessible to the Press day and night, take a leading part in framing of club policy, and in implementing important committee decisions, and guide and assist the club Executive Officers wherever possible.

“Our President fulfils his many tasks in the same accomplished manner in which he proved his famous and outstanding qualities of leadership on the football fields.”

Syd was at the helm for a second Premiership, the famous 1958 victory that preserved the club’s cherished four-in-a-row record – a record that had been established under Syd’s captaincy. In the wake of that success, one observer noted that Syd’s “heart and soul are Collingwood” and praised his “inspiring leadership, untiring energy and zeal.” He was also kind, engaging and had a delightful sense of humour.

But by 1962, even the seemingly indefatigable Coventry had had enough. The team missed the finals in both 1961 and 1962, and such back-to-back failings were as rare as they were unwelcome. With rumblings of a challenge from the Galballys in the background, Sys decided not to stand for re-election at the AGM in March of 1963.

Syd Coventry had been an outstanding footballer – a Brownlow Medallist – and an inspiring, four-time Premiership captain. He was already an icon of the club long before he took over as President. But what he achieved as President – especially in the circumstances in which he took over the role – elevated his standing with the Collingwood fans even further. He truly is one of this club’s most revered figures.