September success against the Blues 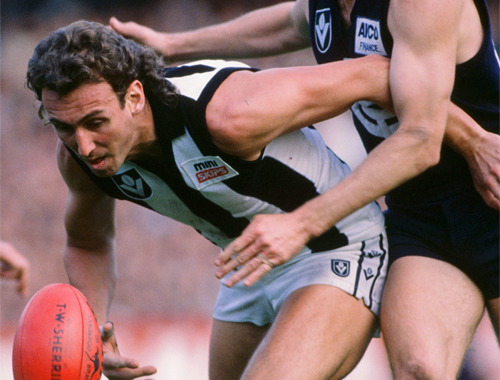 Peter Daicos up against Carlton in a match in 1988.

Peter Daicos had a message for his business partner and footy rival when he left their Balwyn North gym one Friday evening in September 1984.

He didn’t mean it literally, but it is fair to say that Daicos didn’t want Peter McConville to enjoy his weekend.

McConville ran the health club with Daicos, but more importantly happened to be a Carlton footballer.

By the time the pair met again, just under 24 hours later, Daicos would do his best to ensure that McConville and the Blues had a miserable spring afternoon.

It was 1984, and Australian football’s two biggest rivals, Collingwood and Carlton, were squaring off in yet another finals match – this time a semi-final at the ground formerly known as VFL Park, Waverley.

Thirty years on, this game remains the last time the Magpies beat the Blues in a final. And Daicos would play a key role in what was a remarkable Semi-Final victory over their old rivals.

The Magpies had beaten Fitzroy in the Elimination Final a week earlier, a game in which second-gamer Ian McMullin kicked five goals and successful South Australian coach John Cahill oversaw his first VFL finals win with the Magpies.

McMullin was a part of a young Collingwood side that looked a competitive force at stages of the 1984 finals series.

Carlton had lost to Hawthorn in the Qualifying Final, which set up a mouth-watering pairing of the Blues and the Magpies.

Incredibly, Daicos and McConville both posed for a photo together for the Herald newspaper in the lead-up to the Semi-Final, with both teasing each other about the likely outcome of the game.

Daicos insisted he had not had the best of seasons, but planned to have a big day against McConville’s Blues.

True to his word, the Magpie who would turn 23 five days later had an early birthday present that day.

Collingwood was confident it could beat Carlton in the knockout final, so much so that the players were prepared to put their money where their mouth was.

There was no league code back then that stopped footballers from backing themselves to win a match. And when the Magpie players congregated at Victoria Park the talk centred on how confident they were.

A group of players pooled together $3500 to place on themselves at even money to beat the Blues. They offered their coach Cahill the chance to join in, but he declined.

In his second season in charge at Collingwood, Cahill knew the Semi-Final would be tight – “Carlton is a tough finals side, so it will be a really tough struggle. There is a lot of tradition between the two clubs.”

As confident as the Magpies were, they lost veteran big man David Cloke and youngster Jamie Turner to injury.

Carlton had had its issues, too, with captain Wayne Johnston, who had not played since round 17, considered doubtful.

Yet on the Thursday night, as the Collingwood players were pooling their money to back themselves, Johnston was making an unlikely bid to resume in the semi-final, though few believed he would actually be able to play.

It wasn’t until 12.30pm on the Saturday afternoon – less than two hours before game time – that Cahill’s spies told him that Johnston would be running out to play.

Part of the Blues’ ruse was that another injured star, Ken Hunter, would carry a bag into VFL Park, to try and convince people that he was playing, not Johnston.

Collingwood made its own big call, with Ricky Barham overlooked and left to play in the reserves. His good mate, full-back Peter McCormack, rang to console him, but then had to quickly refocus on his own role in defence.

When you match up the two teams from that day, the Blues were older (by almost two years – 26 to 24) and more experienced (2000 games to 1336) than the Magpies. Collingwood had three players who had played less than 10 games. Ron McKeown was the youngest (17) in his fifth game; Darren Millane was 19 and playing his seventh game after joining the club from Dandenong midway through the season; while McMullin was 20 and in his third game.

But inexperience didn’t dampen Collingwood’s enthusiasm or confidence, especially when Daicos got the Magpies off to the perfect start in the opening term. Daicos gathered a loose ball and evaded Wayne Harmes to put through a left-foot goal from 35m. It brought rapturous cheers from those wearing Black and White, though the same sort of applause came at the 10-minute-mark when Johnston came on. Imagine the sort of pressure that followed for McKeown when Johnston ran deep into attack and onto the teenager.

After the game, McKeown said: “I got the shock of my life” at the roar of the crowd.

Cahill wasn’t worried: “Actually, I thought it was great because I knew there was no way Wayne couldn’t be fit as he had not played for (more) than a month.”

Johnston would end the game with 17 disposals, but the footballer known as “the Dominator”, who thrived on excelling against Collingwood, would not do the damage that he had intended to do.

Warren Ralph, coming off an eight-goal effort in a losing side against the Hawks, kept the Blues in the game with a fine first term goal. And Collingwood’s captain Mark Williams helped to secure an eight-point quarter-time lead for his team after evading Harmes and Bruce Doull and slamming home a major.

In keeping with the rivalry between these two sides, there was plenty of ill-feeling, with Ken Sheldon collecting Geoff Raines, while Harmes and Bruce Abernethy also involved in some push and shove.

But Collingwood’s hopes suffered a big blow seven minutes into the second term when Williams led out for a ball and landed heavily on his shoulder. He knew as soon as he landed that his shoulder had popped out.

“I just dived for a ball that has just a little bit out of my reach and as I came down I just made contact with the ground,” Williams would say after the game.

“It just popped out; it’s the first shoulder injury I have ever had.

“I’ve just stretched the ligaments around the collarbone. I’m an optimist, so if the boys do the right thing by me, I might be a chance (to play later in the finals series).”

Carlton grasped onto the lead when Carlton’s only teenager Peter Dean kicked his second goal, but it was short-lived as Collingwood kept coming up with the answers.

The second term was a 12-goal quarter with both sides adding six majors.

Perhaps the most telling came when Gary Shaw offered up a superb pass to Daicos at the top of the square, who had to put up with a knock to the midriff from his business partner, Peter McConville.

The difference at half-time was only 10 points. But Collingwood put a gap on their opponents in the third term and it was Daicos and Mike Richardson who did most of the damage.

Two superb goals in the space of two minutes set the scene.

The first came when Richardson cleared from half-back to Geoff Raines in the middle. He sent it to Denis Banks, who went long, and found Daicos who roved front and centre and nailed his fourth goal. That put Collingwood 17 points ahead.

Then from the next centre bounce Derek Shaw tapped it out of the middle before defender Greg Phillips gave it out to Millane who shoved his way around an opponent – as he would come to do so much more in the future – before the ball deep into attack. Richardson took the ball and even pushed Daicos out of his path before baulking and snapped with his left boot. The goal saw took the margin out to almost four goals.

It was a six-goal margin when the umpire bounced the ball for the last term, with Magpie fans praying the team could maintain their edge.

Daicos got another when he made the most of some good work from Richardson and Neville Shaw, feigning around Bruce Reid – the father of current Magpie Ben – and snapping back on his right foot. It sailed over Ron Andrews’ head.

The former Bomber got one back himself when he was gifted a ball in the goal square by Richardson. Incredibly, Andrews used a drop kick to slot the goal home from centremetres out. Typically, ‘Rotten Ronnie’, as footy fans used to call him, had to do things his own way.

He did the same when he was caught on Channel Seven cameras in the rooms after the game, not backslapping and celebrating as others were, but with his head caught in the form guide.

That drop kick goal was not his last passage of play. At the 31-minute-mark, with the game comfortably in Collingwood’s fans, he was struck by Reid, which would result in a two-game suspension for the Blues defender.

The final margin was 25 points in Collingwood’s favour.

Daicos finished with 7.4 from his 20 touches; Richardson scored 4.2 from his 27 disposals; while Abernethy was also damaging, having 27 touches.

Abernethy told Channel Seven’s Stephen Phillips in the rooms after the game that: “They (Carlton) seemed to have a purple patch for about 10 minutes in the second term when they got back in the game.

“I probably put it down to us lapsing. But I think we owe a lot to our backline, they made it easy for us the way they rebounded.”

Abernethy forecast a future professional for his skipper that day, saying the injured Williams was very vocal and instructive from the boundary line.

“His dad (Fos Williams) was a great coach and I think it has rubbed off a lot on him. He likes to get into the action,” he said of Williams, who would coach Port Adelaide to an AFL flag 20 years later.

Daicos said after the game: “Carlton had their little bit of a go, and we had our little go, and it was like that all day.

“I worked hard during the week with (strength and conditioning coach) Ray Giles, and things fell nicely for me. I got a goal really early and it was the good work of the players up the ground.

“And it is especially good in a final; to beat the old rivals is really good.”

Cahill would say after the game: “We have taken a punt on youth and blended it with experience. Some of the players have come out of the blue and their form was so good that it warranted selection.

“(We) are more ruthless and more aggressive than other (sides) in the past.”

But, unfortunately for the Magpies, a more ruthless and a more aggressive team was waiting for them a week later when the all-conquering Essendon ended Collingwood’s season in relentless fashion.

The more hardened, more experienced Bombers beat up on the Magpies to the tune of 133 points before going on to win the 1984 premiership with a fast-finishing effort to down Hawthorn.