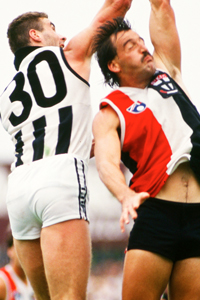 James Manson and Paul Harding lock horns in a marking contest during Collingwood's draw with St Kilda in round four, 1991 at Moorabbin.

It’s fair to say no one will ever forget the club’s 2010 tie against St Kilda. It came in the 2010 Grand Final when the Magpies and the Saints produced one of the most remarkable matches in VFL-AFL history for only the third premiership play-off draw.

The match was jam-packed with inspirational moments; almost unimaginable pressure, especially in the dying stages; wild momentum swings that ebbed and flowed with the game; and an intense, searching spotlight on all the participants.

A point to St Kilda midfielder Lenny Hayes levelled the scores at the 29-minute-mark of the last term – but the emotion experienced between that final score and the final siren will sit with Saints and Magpies fans for the remainder of their lives.

It was a different story the following week when Collingwood comprehensively won the Grand Final replay.

The other Collingwood-St Kilda draw is almost forgotten now.

It wasn’t in a Grand Final; it wasn’t even in a final.

That match can never compete with what happened 19 years later in the 2010 Grand Final – or even what happened 25 years earlier in the 1966 Grand Final when St Kilda edged out Collingwood to win its only premiership by a solitary point.

Yet it should never be consigned to history’s waste bin, especially with as many famous faces as this 1991 contest had.

Seventeen of Collingwood’s famed 1990 premiership side played in that Moorabbin draw six months later – and it also happened to be the first games for captain Tony Shaw and Gavin Brown since that famous October afternoon.

Shaw was coming back from ankle ligaments injury suffered in a pre-season practice match, while Brown was finally able to resume after his suspension arising from the wild brawl in the 1990 Grand Final.

Shaw had actually played the week before, but in the curtain-raiser match on a day that Collingwood unfurled its 1990 premiership pennant before the match against Fitzroy at Victoria Park, which the Magpies won comfortably.

Incredibly, the man who contributed as much as anyone to winning that long-awaited flag was actually sitting in the dressing rooms as Jock McHale Jr – son of the club’s legendary coach – unfurled the pennant to wild applause.

Shaw recalled: “I didn’t see the unfurling, I was in the rooms with the twos. That was my place, I played in the twos.

“It probably meant a lot to other people. But, to me, it’s part and parcel with the past.”

That 1991 season is often referred to as the “hangover” season for Collingwood as the players – and many of those who supported them – struggled to deal mentally with backing up after such a stunning high the previous season.

Six successive losses in the middle of the 1991 season all but buried Collingwood’s premiership defence, but when Shaw and Brown rejoined the team for the Round 4 match against St Kilda, the season was still very much alive.

The three missing Magpies from the ’90 flag team – Graeme Wright, Mick McGuane and Mick Gayfer – played in the reserves that day. Two of those unlucky not to play in the premiership – Alan Richardson and Ron McKeown – were back in the seniors.

The other relatively new face was a pint-sized rover from South Warrnambool, wearing the No.60 jumper. Stephen Anderson was playing the second of what would be four matches in black and white.

According to the statistical website, AFL Tables, only one other Collingwood player has worn a higher number in a senior game than Anderson’s No.60 (Terry Keays also wore No.60), and that was Andrew Witts (No.65 in 1985).

Nicknamed ‘Shorty’, Anderson was ironically first noticed by St Kilda’s 1966 premiership player Kevin ‘Cowboy’ Neale, who coached him for a short time at Central Districts in the SANFL.

The Pies picked Anderson up for the 1991 season.

“I’m just rapt to be given a chance,” Anderson, an apprentice electrician, said at the time.

And he took his chance that day, having 12 touches, kicking a goal for his side and showing some desperate tackling, including in the last few minutes.

Collingwood was an overwhelming favourite heading into the match, having won 19 of its previous 21 matches with St Kilda.

The Saints went into this match without two key stars Tony Lockett and Nicky Winmar, but they had a bevy of young stars, including a kid in his fourth season but with enormous potential in Robert Harvey. He would end up playing 21 seasons.

As the Herald Sun wrote: “(Collingwood’s) running players – Stephen Anderson, Darren Millane, Scott Russell and Tony Francis – had given St Kilda the run around early in the first quarter, but were let down by poor kicking.”

But by quarter-time the Saints had hit back to lead by eight points – 3.6 to 2.4 – after forward Stewart Loewe delighted the home crowd by kicking a goal after the siren.

The Magpies had cut the deficit back to seven points by half-time, kicking three goals to two. But a goal to St Kilda’s Brian Wilson was enough to raise the ire of Collingwood coach Leigh Matthews.

It came when Gavin Crosisca was penalised 50m, which allowed Wilson to score an easy goal. Matthews had little hesitation in ripping Crosisca off the ground as penance.

St Kilda had other issues though. They lost Mick Dwyer with a knee injury and then Tony Antrobus to an ankle strain, meaning they were reduced to only 18 fit men – which appeared to give the Magpies an advantage in the second half.

Brown kicked the opening goal of the second half for Collingwood, as the visitors regained the lead with the first of six goals of the term. The Magpies’ third term dominance was mainly through the marking power of James Manson and Brown.

By three-quarter-time, the Magpies led by a solitary point in a scoreline eerily familiar.

The Herald Sun summed up the tensions in the last term and a touch of the history between the two sides: “St Kilda and Collingwood seem to have made a habit of epics and Saturday’s thriller had more than a passing resemblance to a certain Grand Final, nearly 25 years ago.”

The paper added: “(It) was, in spirit, style and script, similar to the epic matches of the ’60s and ’70s – those matches where Mike Williamson excelled, revelling in the drama and boldly proclaiming ‘I tipped this’.”

The home side seemed to have the match in its keeping when Damian Kitschke put St Kilda 13 points in front 24 minutes into the final term. But Collingwood was not to be deterred – even though less than eight minutes was left on the clock.

Almost immediately after the Kitschke goal, Scott Russell kicked a reply after a handball from Manson. It was followed by behinds to Peter Daicos (after an uncharacteristic missed snap shot) and Jamie Turner (from a set shot he should have nailed).

Then, with two minutes left on the clock, Tony Francis gathered a loose ball out of a stoppage to snap truly from 35m to put the Magpies in front by a point.

But the free kick from the centre square went to St Kilda, after too many Collingwood players were in the square, and Paul Harding punted the ball long in the Saints’ attack.

As Bruce McAvaney said on Channel Seven: “What a mistake from Collingwood at this stage of the game.” It made for a desperate battle in the St Kilda forward line in the last minute and a half.

Craven almost snatched a point, but it was superbly smothered by Michael Christian. Ron McKeown  was lucky not to be paid a deliberate out of bounds after a punch over towards the boundary line with 53 seconds left.

Out of nowhere, a tackle on Denis Banks saw the ball fall out of his arms, and in swooped Robert Harvey, who had been an outstanding player on the day. He ran in and steadied, with McAvaney saying: “Surely a goal or a point.”

Normally, Harvey would have slotted it right through the middle. He was under pressure, but directly in front. McAvaney said breathlessly: “I think he will kick it … and he has.”

He hadn’t. The goal umpire signalled a miss with less than 30 seconds left and with scores locked together on 13.16 (94).

Channel Seven’s Ian Robertson said: “I’ve seen some great contests, physical, and this has been one of the best.”

Doug Barwick slammed the ball back into play as the final seconds ticked away. Russell Morris barrelled it back towards the forward pocket, and Barwick made a desperate attempt to spoil Kane Taylor as the ball trickled over the boundary line with eight seconds remaining.

The siren sounded before Damian Monkhorst and Damien Kitschke could contest the ruck.

McAvaney said: “The two teams have fought for two hours together, rarely has there been anything in the game, it’s been one of the classics, and it has finished line-ball, just as they started two hours ago.”

Brown, who kicked three goals, said: “A draw’s a funny feeling … because you haven’t won and you haven’t lost. But I suppose two points are better than nothing. Anyway, we’re getting used to it.”

Brown was talking about the fact that this Collingwood side had also played in a draw seven games earlier – in the 1990 qualifying final against West Coast.

That 1990 finals draw one was much more memorable than the 1991 tie – and so too was the 2010 Grand Final draw – but those who watched the Moorabbin match are unlikely to ever forget it.