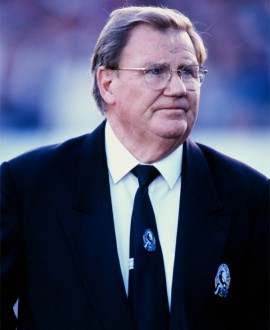 Allan McAlister looks on during the 1995 round 7 contest between Collingwood and Sydney.

Allan McAlister made a pledge when he became Collingwood president during the tumultuous month of April 1986 – “I want to be a low-profile president.”

It wouldn’t quite pan out that way as McAlister would spend 10 seasons as one of the most high-profile, hard-working, but at times controversial club presidents in AFL history.

He worked for Collingwood’s best interests as his only priority, even if at times it earned him – and sometimes the club – with the wrath of the outside football world.

He made mistakes – undoubtedly – but he brought a passion to the role that endeared him to most supporters and he helped to bring the club back from the financial precipice that for a time it looked like falling off.

McAlister’s legacy to Collingwood came in three parts – dragging the Magpies out of a debt of $3.5 million that took them to almost the point of bankruptcy in 1986; providing a platform for a period of administrative stability that allowed the club to concentrate on its football programs; and, ultimately, for helping to engineer the 1990 premiership success under coach Leigh Matthews that ended 32 years of heartache.

A successful businessman, McAlister had been a part of the ‘New Magpies’ group – with Ranald Macdonald as president – which came to power in late 1982. They had promised a revolution to modernise the club as well as embark on the most audacious recruiting campaign in the club’s history.

McAlister, as treasurer, believed he had secured John Kennedy as Collingwood coach, but was frustrated when others on the board overruled him and locked in John Cahill as coach for the 1983 season.

The revolution turned messy within three years. And when Macdonald’s tenure was doomed, and he resigned four months into 1986, McAlister saw his opportunity to become the president.

He came to the role at one of the most difficult times imaginable. The recruiting spree almost ruined the club, there was political infighting and the players were forced to take a 20 per cent pay cut just to keep the club afloat.

McAlister had helped to recruit Leigh Matthews as an assistant coach to Bob Rose, but the Hawthorn legend was elevated to the main role when Rose resigned early in the 1986 season.

Matthews and McAlister, along with football manager Graeme Allan, would prove to be a formidable off-field team for the next decade.

One of McAlister’s first tasks as interim president was to convince the banks to let the Collingwood Football Club trade its way back into the black again. He was also determined to show the league that Collingwood still had plenty of influence to assert, despite the difficulties it experienced in the mid-to-late 1980s.

“I never set out to be outspoken on issues because it is not in my nature, but I became sick of the way Collingwood was treated at some of the meetings (with the league),”McAlister said in reflection. “I was hurt that this great club had no influence or say in matters. I realised I had to assert authority and make sure we would become a force again.”

McAlister gave Matthews a free rein as coach, and the club began to build a list that could contend for that elusive premiership. Famously, he would walk the boundary line with Allan at training sessions, and was a strong support to the coaching staff, and to the players, which culminated in the 1990 premiership success.

That 1990 Grand Final would be something no Collingwood fan would ever forget. And at the time McAlister all but guaranteed the premiership coach a role for life, though the club would not win another final in his remaining five seasons as president.

McAlister took on the AFL and rival clubs in a number of different areas. He rallied for a time to keep Victoria Park not only as Collingwood’s home base, but also as a viable AFL ground, to the point of unveiling plans in 1989 that would have seen the ground turned into a 40,000-seat stadium.

Ambitiously, and some would say bizarrely, he dreamed of ‘Maggieland’, which was meant to be Collingwood’s answer to Graceland. Under his direction, the club bought up properties near the Victoria Park ground which was to designed to one day include a precinct that had an indoor sports area, a theatre, a boutique hotel, a new social club, a museum, and even a restaurant chain.

He talked tough with the AFL, refusing for a time to accept that the AFL could switch a game against Footscray from Victoria Park to the MCG in 1992, even threatening a boycott that never happened. He questioned the draft, he queried the viability of non-profitable clubs, and he even threatened drastic action if the AFL allowed Port Adelaide to come into the competition wearing black and white.

Importantly, he also gave the club the green light to recruit Nathan Buckley from Brisbane in late 1993, but lost out to a board vote over the plan to secure Tony Lockett at the end of the 1994 season.

His biggest gaffe came when he was embroiled in a racial storm after making remarks about Aborigines on television, which, for a time, did the president and his club serious damage. To try to repair some of the ill-will, he paid for a tour of the Top End in an effort to rebuild the bridges.

The on-field success that seemed assured after the 1990 flag sadly did not come. The Magpies finished seventh, fifth, eighth (twice) and tenth in the years after the premiership.

Matthews was replaced as coach. And with discontent surrounding the club’s football state, concern about the club’s off-field investments, and speculation about a challenge to his position, McAlister opted to step aside after the end of the 1995 season, saying it was time for fresh ideas and a fresh start.

“With Leigh (Matthews) gone, perhaps it’s time for a new regime,” he said. “It’s been a wonderful era for me. Getting Leigh to the club and winning a flag have been great achievements.

When asked at the time what he would like his football epitaph to read, McAlister had no hesitation in saying: “He only batted for Collingwood.”