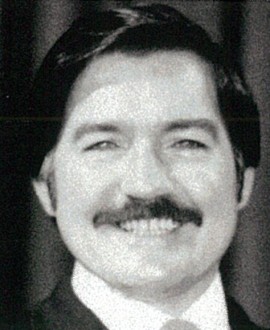 Businessman Ern Clarke’s tenure as president lasted only 17 months, but it covered one of the most tumultuous periods in the history of the Collingwood Football Club.
Clarke wasn’t the only reason for this; others within the club played their roles, too. But there is little doubt the tension and lack of cohesion between Clarke and Magpies coach Murray Weideman – who had inherited the job as one of the last acts of outgoing president Tom Sherrin in October 1974 – and a lack of unity between a divided board and the playing group played a role in the unseemly division and dissension.

All of those things combined to create an untenable situation that led to Collingwood’s first wooden spoon in 1976, albeit months after Clarke had been pushed into a resignation to avert further turmoil at the club.

According to Richard Stremski’s Kill For Collingwood, Clarke had come to the presidency “almost by default” after Jock McHale Jr. and Frank Galbally chose not to run for the role when Sherrin announced his resignation late in the 1974 season.

Clarke promised to be “part of a progressive movement in the club”, which was seen as the antidote to the overly traditional approach of the Sherrin administration which had endured several heartbreaking Grand Final losses. And members craving that elusive premiership favoured this “brash, young businessman” over former great Neil Mann, with Clarke easily winning the role when it was put to a vote.

As part of his promise to modernise the club, and free it from the shackles of the past, he oversaw the removal of the photos of past greats from the dressing room walls. He felt tradition weighed down the present, and wanted the modern players to be seen to make their own history.

There were tensions within the club almost immediately from the time he took over, though the first six months seemed to pass without too many incidents. Weideman had the team playing reasonable football that would lead to a finals berth in 1975; star recruit Phil Carman was on his way to a Copeland Trophy in his debut season; and Clarke’s modernisation program had seen the set-up of the first coterie within the club, the Woodsmen.

But not all was rosy. Secretary Peter Lucas resigned and the board was divided by some of the president’s actions, even though those strains were kept relatively in house in that first season.

Relations between Clarke and Weideman were unmistakably frosty, particularly with the coach’s belief that the president was having too much to say about football matters, predominantly about team selection.

As Stremski noted, Weideman and Carman signed a statement at the end of the 1975 season – after Collingwood had finished fifth – that they would quit the club if Clarke remained president. They withdrew it before it reached Clarke, and that all but guaranteed a showdown between coach and president the following season that only one of them could possibly win.

Clarke’s decision to chase ex-Magpie Des Tuddenham and get him to return to Victoria Park in 1976, and re-assume the captaincy, frustrated Weideman, but also Wayne Richardson, who had been the skipper the year before.

Petty jealous and divisions within the playing ranks about payment to certain players, with much of it directed at Carman, led to tensions at almost every level of the football club in that fateful 1976 season.

Carman summed up the mood when he later declared: “I just couldn’t be bothered; the administration wasn’t stable and they’d just lost me.”

Something had to give, or perhaps someone. The issue came to a head early in the season when Weideman issued a public statement, saying he could no longer continue to coach the club if Clarke remained as president. The wording of it showed the true depth of feeling when he stated: “I will not coach Collingwood until Ern Clarke resigns as president … it’s either him or me. I cannot work under this man again.”

“Even if I lose my job, which I am sure I will, at least I’ve let the players, members and supporters know what is happening at Collingwood under this president.”

The internal bickering was laid bare across the front page of The Sun newspaper with the headline: “Magpies: It’s Open War!”

Although some of the players had their own issues with Weideman, the group backed him over his showdown with Clarke.

The president and the coach were forcibly brought together to make a temporary truce for the sake of the club, but it was only ever going to cover the cracks for so long. Petitions from members called for Clarke’s departure, and in late May, he felt as if he had no choice but to resign from the presidency in order to save the club from further embarrassment, or perhaps worse.

Stremski concluded: “No one person or group of persons was responsible for the fiasco of 1976; everyone was culpable. The club had an impetuous president, an ineffectual committee … and an undisciplined coach.

To cap off a frustrating year on and off the field, the Magpies finished last on the ladder for the first time in their history, and while Clarke wasn’t there when it happened, the divisions within the club during his short-lived presidency undoubtedly contributed to the end result.