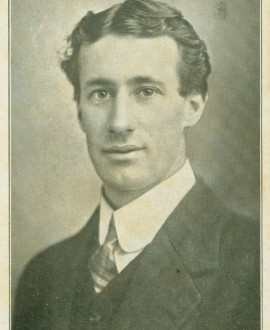 After the death of founding President William Beazley and the brief term of the reluctant Alfred Cross, Collingwood turned to its first ‘outsider’ to serve as its third President. And what an inspired choice Jim Sharp proved to be.

Sharp had been an outstanding defender with Fitzroy before he joined Collingwood as a player in 1911. His playing career at the Pies was cut short just over a year later by a seriously broken leg, but he had impressed so many people at Victoria Park in his short time there that he was immediately elevated to a vice-presidential position. The following season, 1913, he was elected by the Committee to take over as club President.

Jim had many qualities that stamped him as a man capable of leading a major football club. Chief among them was that he was one of the most admired and respected men in football. “It is men like Jim Sharp who bring honour to the pastime,” wrote the Football Follower.

He was well educated and well spoken. Indeed there were times when others around this “working man’s” club had to ask Jim to use words or phrases that were easier to understand! He was also successful in business, his family having for many years run the famed Allan Photographic Studio in Collingwood. After a short dalliance with teaching in Box Hill, Sharp became involved with the family business and, together with his brother Les, ran it until his death in 1945.

Jim Sharp proved to be an excellent President, his intelligence, integrity and knowledge piloting Collingwood through the difficult years of the First World War and into the dual Premiership successes of 1917 and 1919.

He was not only an outstanding leader but also a popular one. In 1917, ‘Chatterer’ in the Football Record claimed that “there has never been a more popular President’.

That was true not just of his fellow administrators but also the fans, with whom he was a favourite. Jim made no secret of his love for the club and, before one Grand Final, even allowed that passion to spill into verse:

“Two fast teams, a springtime day,
Who will win, ’tis hard to say.
The Magpies record is well known,
But Richmond’s fame has also grown.
So cheer them on, both teams good,
I tip to win bold Collingwood.”

Magpie fans also loved his commitment to the club, as shown when he pulled on the jumper again in 1917 for one game when the team was a player short. His knee crumpled in the first minutes, but everyone loved that he’d been prepared to put himself on the line.

He eventually resigned at the end of 1924, after Collingwood’s two least successful seasons to that point. The club’s annual report that year noted that his resignation had been accepted “with the keenest regret”, and especially remarked upon the ‘hands-on’ nature of his presidency. “Mr Sharp was not content to remain a president in name only. He was constantly in evidence as chairman of the General Finance and Selection Committee, where his football experience and ability were invaluable. His genial personality and fluency of speech made him an ideal chairman, and his retirement is a distinct loss to the football world in general, and Collingwood in particular.”

Thereafter Jim concentrated on business at Allan Studios, and on his other love, lawn bowls. But he remained a patron of the club and continued to be a keen student and observer of the game.

Never was this better demonstrated than in 1944, just a year before his death, when he penned an article for the Sporting Globe. It says much about his standing in the game that he was still being asked for his views, some 20 years after he had retired. And what he had to say was freakishly prescient.

He suggested a number of far-reaching changes to the game, including a significant increase in the number of players on the bench. At that time there was only one, and it was only a direct substitute, no interchange. But Sharp believed as many as four or five players should be on the bench, so a game would not be ruined by injuries. How many do we have on the bench today?

He also suggested that, for finals matches, every seat in the public stands should be numbered and booked in advance. And he also advocated that a free kick should be paid against any player who kicked the ball out of bounds on the full – a full 25 years before this rule was actually introduced!

Such progressive thinking was typical of Jim Sharp, and one of the many reasons he was so highly regarded in the football world. Collingwood was fortunate indeed to have had him serve more than a decade in the top position at the club.